Now you know who to blame

My Yuletide panic levels used to rise around the beginning of December and steadily got worse as the month progressed and the dreaded 25th drew closer. It was all about buying Christmas presents and the truth was that I hadn’t a clue what to buy my wife for Christmas. She’d already announced that she had enough jewelry so that was out which didn’t leave many other possibilities for my already limited imagination.

I generally did my panic Christmas gift shopping a few days before Christmas day and ended up with five or six things that might just pass muster as a decent and thoughtful Christmas gift. But then I’d get a final panic attack on Christmas Eve and realize that I’d bought and wrapped a load of crap that nobody in their right mind would want to receive.

For years I dreaded the Christmas holiday and experienced a severe dose of the morbs for at least three weeks. I’m told that this is pretty common and that it’s not just the tape loop of Boney M’s Christmas hits that drives normally sane people mad.

Finally I hit on the idea of tearfully confessing all to my wife…. a sort of Scrooge coming out of the closet process. I told her that the reason I was a short tempered miserable sod over Christmas wasn’t really because I objected to the crass commercialism of an important religious celebration but because I could never think of what presents to buy her. I was busy pulling the Kleenex Extra Strength Tissues for Men out of the box when she too confessed that deciding what to buy me also freaked her out.

I should point out here that I had always given her a list of suitable gifts such as a bottle of Lagavulin 16 year old or a Porsche 911 whereas she had always refused to give me a list telling me to surprise her with something I know she would like. If I knew what she would like I would hardly be begging for a list of what she would like would I? Anyway, it turned out that she also started to panic mid December when she realized that most of the things on my list were either unhealthy or unaffordable and hadn’t a clue what to buy me.

So we came to a bilateral agreement that would put the Brexit negotiators to shame. We agreed that it was important to have something to open with the mince pies on Christmas morning and decided that we would buy our own presents, say five of them each, and then open one another’s presents for that all important element of surprise as you rip the Christmas wrapping off. Admittedly it’s not quite the same holding up a present saying “just what you’ve always wanted” but certain traditions have to be observed.

This worked well for several years and had the added benefit that you could spend whatever you wanted on your own present and that I finally got a bottle of Lagavulin for Christmas. But after five years of opening my presents to find Woolies socks or underpants my wife accused me of being unimaginative.

Every once in a while though a book would turn up just before Christmas which would immediately suggest itself as the perfect self gift or stocking filler for a discerning friend or relative. Nothing too serious you understand and certainly nothing as long as Obama’s latest doorstop. This year that book just has to be “50 People Who F***ed Up South Africa” by Alexander Parker and Tim Richman. 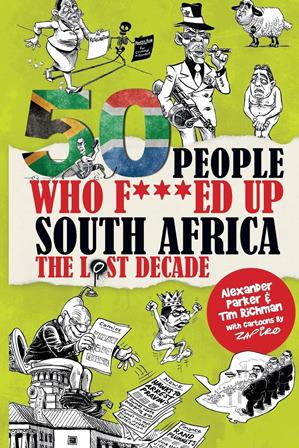 This is the latest in the series from Parker and Richman which kicked off exactly ten years ago with ‘50 People Who Stuffed Up South Africa’ which went on to sell over 50000 copies and enabled them to buy a yacht and live in the South of France while they were haggling with now disgraced Hollywood moguls over the movie rights.

This latest version deserves to sell way more than 50 000 copies (after all “The Presidents Kippers”, a book about what Jacob Zuma enjoyed for breakfast, apparently sold more than 200000) and should enable Parker and Richman to buy their own movie studio.

Disclaimer: I should point out here that Tim Richman was the brave fellow who published my post Sunday Times collection of columns ‘Out to Lunch-Ungagged’ and Alex Parker is a fellow petrol head and former motoring journalist chum so I may be a little biased in my effusive praise.

In the earlier ‘50 People Who Stuffed Up South Africa’ (authored by Alex Parker) he describes Julius Malema in 2010 as “a waddling stain on South Africa” who would soon be a mere nasty memory. More work needed with the tea-leaves there I think Alex.

However, Kiddie Amin features in the latest book with the rather more guarded final sentence reading “A bumbling fascist in 2010, a slicker fascist in 2020. The stench of his keto-breath politics may be with us a while longer”. Got that right boys.

The joy of a book like this is that the 50 entries are all bite sized portions which makes this the ideal bedside book if, like me, you’re not up to coping with a ‘Brief History of Time’ with your night-time cocoa. It’s equally at home in the guest toilet (or ‘lavatory’ if you’re a disciple of Nancy Mitford) and most entries would almost certainly prove a quick cure for constipation.

The beauty of a book that gathers 50 of the most odious scoundrels this country has ever seen and lays out their sins for all to enjoy in the wittiest of language is that you can pick your subject. I was about 80 or so pages in when I suddenly felt that I needed to read about Carl Niehaus who appears on page 183.

I had never realized that he had been ‘gang-raped’ by more than 20 men the night before he was sentenced for high treason. Or that he had obtained his Doctorate from Utrecht University and was on the boards of many highly influential international organisations.

The poor misunderstood man I was thinking until I read further and it was revealed that virtually everything that comes out of this buffoon’s mouth is a lie. And don’t get me started on the frauds he’s committed. Once I’d finished Niehaus I just had to move on to Hlaudi Motsoeneng who, the authors make clear, is nutty as a fruitcake and extremely unpleasant to boot.

All the usual suspects are here including the Guptas. Reading about the Guptas I couldn’t help thinking that we attach too much blame to these poor fellows. According to the authors they were despatched to SA in 1990 by Papa Gupta to “take advantage of the opportunities that might arise in the country’s new political era”. Who knows …. they may have arrived with the intention of setting up legit businesses, paying taxes and becoming model citizens.

Then they realized that the ANC bigwigs were up for some serious corruption and self enrichment and decided to go that route instead. And who could blame them? Rather make a fast buck than spend a lifetime like some white idiots do building up a reputable business.

As we know, the ANC are very pernickety when it comes to racial quotas and they certainly won’t be disappointed with the black representation in this book. Having said that there is fair sprinkling of white f***ers too including the Bell Pottinger hag Victoria Geoghegan, Markus Jooste, Adam Catzavelos, Oscar Pistorius, KPMG’s Trevor Hoole and friends, Gavin Watson and, rather surprisingly Helen Zille whose damage to SA pales compared with most of the people in this book.

It’s a fabulous read and hopefully the chickens are about to come home to roost for many of the politically connected lowlifers included in this book. I look forward to the 2030 edition of ‘50 People Who Look Good in Orange Overalls’. Although, having read some of the accounts of inhuman vileness in many of the entries I am sure many would join me in wishing for a swifter and more appropriate punishment…..anybody know how to build a guillotine?

The crowd that wasn't meant-to-be