How our readers can step in and help defend our right to 'criticise and oppose', and publish whom we want

On Wednesday last week Politicsweb received an ultimatum from our long-running and previously completely supportive partner, the Friedrich Naumann Foundation for Freedom (FNF): Sack David Bullard as a columnist over an ill-considered personal tweet of his, or we terminate any further funding of your publication.

This was a demand that was out-of-character, disproportional, and at odds with their previous firmly expressed policy of not interfering in our editorial decisions. Moreover, as the Foundation would have known full well there was only one answer any self-respecting liberal editor could give and that was “no”.

A couple of years ago this sudden withdrawal of funding would have been a financial death blow to this publication.

Online advertising (which is way down anyway due to the Covid-19 crisis) covers a tiny fraction of costs, and the FNF was the only Western donor organisation actually willing to support a liberal publication like this one - one unafraid to publish all shades of opinion, and to criticise the African National Congress’ racial programme and ideology.

For almost all other foreign donors the latter is a taboo, which is why you won’t read any criticism of “transformation” in many otherwise admirable and redoubtable publications that depend on their funding.

Paradoxically too, the more transformation is seen to have failed South Africa, the greater the sensitivity of many local intellectuals to any kind of criticism of it. This is particularly so of those pro-ANC types who may have been critical voices in the wilderness during the Zuma years but have now returned to the fold under the Ramaphosa Presidency.

The FNF’s lawyerly justification for their decision was given a gleeful thumbs up by SABC board member, Michael Markovitz, journalists like Micah Reddy of amaBhungane - a donor-dependent publication that does brilliant work exposing corruption but carefully avoids explaining it - and even a quiet nod of approval by Max du Preez: 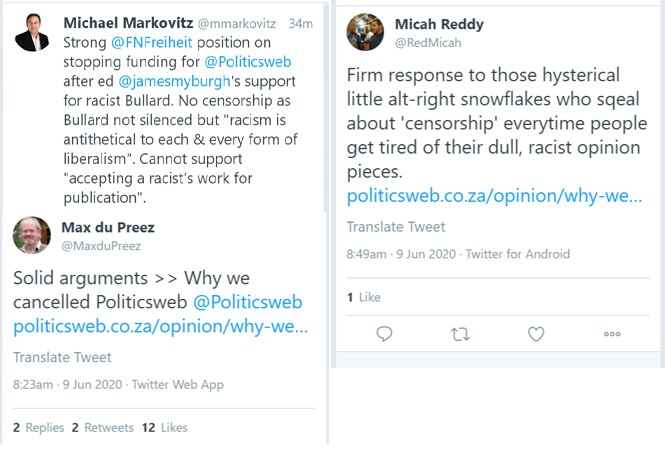 Transformation itself is - first and foremost - a programme to extend ANC influence and control over all “levers of power” in state and society. The party controls promotions and appointments in the state and parastatal sector and influences them elsewhere. ANC cadres allocate tenders, broadcasting licenses, state advertising budgets, sit upon intelligence slush funds, and so on; and now, thanks to the lockdown, have the right to tell enterprises whether they can or cannot operate at all. The party, in other words, has huge leverage both over most organisations in society and the many ambitious individuals striving for personal advancement within the system.

This is not an environment, in other words, conducive to the work we do. Which is exactly the reason it is so important.

It is not clear who exactly ordered this "kill shot" against Politicsweb, or what their motives were, but we are going to work very hard to make sure that they are sorely disappointed.

We have long been aware of the dangers of donor dependency. Since late 2018 we have, ironically with FNF help, sought to secure our independence by building up our supporter/subscriber base. We have come a long way since then, but we are not there yet.

Thanks to our supporters we are able to box on, in a way we would not have been able to have done before. If you are not a subscriber though we would ask that you now become one.

We are currently at 897 paid-up members. We need to get to a thousand before the end of the month. Once we have then doubled that, there will be no looking back.

Please allow me to re-introduce myself

No, I will not sack David Bullard as a columnist