David Benatar & Anton Fagan write on why prohibition is wrong response to UCT Fallist's "one settler, one bullet" call

Reprehensible Tweets: Why Prohibition is the Wrong Response

On the morning of Tuesday 6 November 2018, University of Cape Town (UCT) student Masixole Mlandu tweeted the first few pages of his Political Studies Honours research project. The acknowledgements page ended with the words “ONE SETTLER, ONE BULLET!!” (Capitals in the original.) The following day, Wednesday 7 November, after significant indignation had been expressed in response, he expanded his point by tweeting as follows: “One Settler, One Bullet. Each bullet will take us closer to freedom.”

Exactly what Mr Mlandu meant by his Tweets is not clear. He may have meant them as a call for a genocide against millions of his fellow South Africans. Or he may have meant them only to express the view that such a genocide would be desirable or would be deserved by its victims. Either way, the tweeted words are morally repugnant. Reasonable people, whether or not they identify themselves as “settlers”, will and should be outraged by them.

It is probable that his Tweets are prohibited by section 10 of the Promotion of Equality and Prevention of Unfair Discrimination Act. Under the heading “Prohibition of Hate Speech”, the section states that “no person may publish, propagate, advocate or communicate words based on [race, ethnic or social origin, colour, or culture] against any person, that could reasonably be construed to demonstrate a clear intention to – (a) be hurtful; (b) be harmful or incite harm; (c) promote or propagate hatred.” 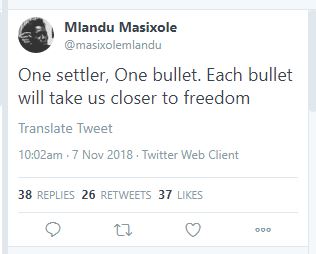 Life is better in South Africa

The fury of a Sisulu scorned

Carrots for the ANC govt

It's not the ANC that is worrying me right now

The week that was: An Apple a day keeps the markets at bay, Netflix, Tesla and Shoprite

"The easy money has been made, it’s time for investors to grit their teeth – Magnus Heystek" - BizNews