On the IMF's 2017 South Africa Report

This brief by Charles Simkins reviews the International Monetary Fund's views on the South African economy in its 2017 report.

Every year, the International Monetary Fund carries out an Article IV consultation with South Africa. Reports from these consultations are published on the IMF’s website. We reviewed the 2016 report last year. The 2017 report was published in early July. How have the IMF’s views on the South African economy changed between 2016 and 2017?

As Figure 1 indicates, the IMF now believes that the dip in growth in 2016 was slightly less than before. More significantly, the projection of the growth rate between 2017 and 2021 has been reduced. 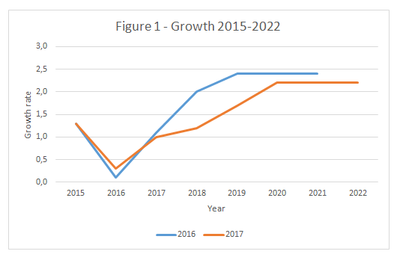 Effectively, the projection assumes no major new government expenditure: not on free higher education, nor on further large real increases in public sector wages, nor on national health insurance, nor on the materialization of contingent liabilities. The result of the revenue and expenditure trends is a higher projected gross government debt to GDP ratio in 2017, as indicated in Figure 2. 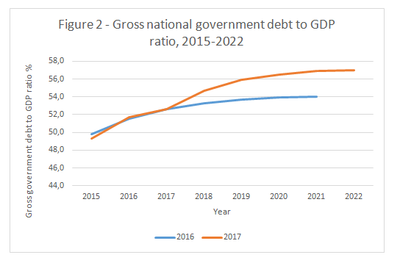 The IMF’s view is that fiscal space is limited, given rising debt, sizable contingent liabilities, the relatively high cost of government borrowing, and significant uncertainties regarding the future path of economic growth and interest rates. The trajectory of the government debt to GDP ratio is particularly sensitive to the growth rate. If growth turned out 1 percentage point lower than in the baseline projection, on average, during 2018–22, the debt ratio would reach a level 14 percentage points of GDP higher than in the baseline by 2022, to above 70%, the high risk threshold for developing economies. There is also a risk of the realisation of contingent liabilities (the calling of government guarantees of state owned enterprise debt) and the need for SOE recapitalisation after eight years of losses.

Accordingly, the IMF urges structural reform in product, service and labour markets, as it did last year. It noted progress in increasing electricity capacity (but see the recent brief by Anton van Dalsen and Charles Collocott [1]) and improving labour relations, but reforms in other areas have lagged. But structural reform in pursuit of growth is one of the government’s least preferred activities, even given the hell-fire warning that insufficient reforms would lead the country to become stuck in a prolonged cycle of anaemic growth, rising public debt and greater exposure to shocks, such as worsening sentiment of foreign and domestic investors alike and possibly the abrupt contraction of capital inflows, imports, and domestic activity.

It is worth noting the IMF view that financing of the current account deficit is likely to come from portfolio investment flows, which are vulnerable to foreign and domestic currency ratings, confidence in governance and government policy and international economic conditions. On the external front, too, there are risks which stem from a possible decline in commodity prices and a retreat from cross-border integration.

On the other hand, domestic risks include protracted domestic policy uncertainty, continued deterioration in the quality of governance, major spending pressures, reversal of the recent improvement in labour relations, and a possible deterioration in banks’ balance sheets stemming from protracted low growth.

The 2017 report has a special section on the national minimum wage. The IMF dutifully points out that national minimum wages have the potential to improve incomes and well-being for workers currently earning less than the proposed minimum, while observing that minimum wages can induce some firms that currently pay workers less than the proposed minimum to reduce employment. More interestingly, it points out that:

3. Whereas the national minimum wage would be likely to reduce inequality, the impact on poverty is likely to be limited, because the lowest quintile of the population receives only 24% of its income from wages, the remainder coming from social grants. Moreover, compliance is likely to be lowest in respect of low-income earners.

Accordingly, the IMF is concerned about adverse employment effects and recommends that employment should be closely monitored once the minimum wage becomes effective. It suggests that exemptions beyond those for agriculture and domestic workers could be considered—for example, for newly-hired youth. It also recommends the introduction of complementary measures to support small- and medium-sized enterprises, should employment among them drop substantially. Will the national minimum wage become subject to the death of a thousand cuts? And what will happen if it doesn’t?

The IMF’s general view of the South African economy is far from upbeat.

The outlook is sobering with considerable downside risks. [2016]
Risks to the outlook are tilted to the downside given challenging external and domestic contexts. [2017]

Don’t we just know it?

Charles Simkins is head of research at the Helen Suzman Foundation.

On our relationship with the IMF & World Bank - David Maynier