The full side effects of the COVID vaccine are not yet confirmed but two of them appear to be brain fogging and a sudden desire for a totalitarian state. Judging by the number of people now enthusiastically calling for a mandatory vaccine passport it appears that there are many out there who don’t feel that the restrictions on our freedoms over the past year and a half have gone nearly far enough.

These are not the propaganda spouting media idiots that one would expect to hear these things from but respected business people, academics and medical practitioners. The key problem for those promoting these passports seems to be trust in the vaccine itself. Any rational person would obviously have to question why a group of people who had received the COVID jabs were so terrified of mixing with people who hadn’t been jabbed.

Logically the risk should rest with the anti-vaxxing, science denying, tin-foil hat wearing, conspiracy theorist cretins who refuse to take the jab. They would appear to be the ones at risk while the fully vaxxed should be feeling totally relaxed but, as the song says, it aint necessarily so. Which doesn’t convey much confidence in the COVID vaccine does it?

While the idea of a mandatory vaccine has been put on hold for the moment in the UK other European governments are enthusiastically curtailing their citizen’s freedoms and forbidding them to even enter a restaurant or a shopping centre without the appropriate papers. Who knows what a taste of North Korean style crowd control will do to the brains of politicians in the future?

Hopefully we are still some way from a mandatory vaccine passport in SA but the signs are not encouraging. While no politician would risk mentioning the subject ahead of municipal elections the situation could very well change on November 2nd. At the moment the most noise is coming from the private sector. ___STEADY_PAYWALL___

A Stellenbosch academic called Prof Keymanthri Moodley was interviewed on eNCA a short while ago defending the ethics of a mandatory vaccine passport. What struck me most was the rapid blink rate of the interviewee which set alarm bells ringing.

Googling her name I came across the Stellenbosch University website which had this interesting snippet: “Keymanthri is a member of the Academy of Science in South Africa (ASSAf) and completed an Executive MBA in 2015. To date, she has been awarded research and capacity development grants to the approximate value of R40 million”.

Jonathan Jansen has also recently come out in favour of mandatory jabs if you want to get a degree at Stellenbosch University. This is apparently to protect people who have already been jabbed from getting the virus that they have been vaccinated against. Go figure.

Discovery Health chief Adrian Gore (a delicious surname for the head of a medical aid) was one of the first out of the blocks to propose a mandatory vaccine policy for all Discovery employees. He gives six reasons for the decision and the first is that “people are dying, we need to stop it”. My dear Adrian, calm down. People are always dying and you mustn’t see it as a personal failure on their part.

He adds that we are “living through an unprecedented health tragedy." That is clearly hysterical nonsense since there have been plenty of health tragedies that have claimed far more victims in our past history. Try the bubonic plague of the 14th century that wiped out an estimated 40-50% of the entire population of Europe. Or the more recent Spanish Flu of 1918 which was estimated to have claimed between 25 and 50 million lives out of a global population of around 2 billion. (According to Discovery itself the infection fatality rate for COVID in South Africa has been between 0,39% and 0,5%).

The claim that there is a clear “moral and social obligation to pursue this” is so risible that one can only dismiss it as the schmoozing of a super wealthy businessman. Discovery’s own actuaries estimate that 70% - 80% of the South African population has been infected by and recovered from Covid and so have acquired significant and perhaps better immunity in this manner. But this important fact does not feature in Gore’s article even though immunity through natural infection is accommodated in the “vaccine passport” system in a country like Germany. 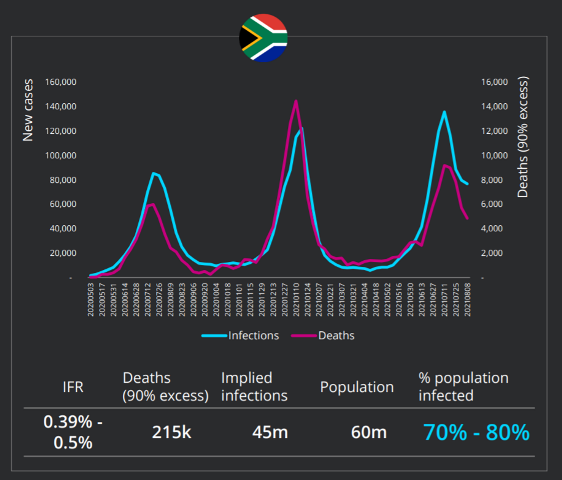 Giving up personal freedoms and only being allowed to lead your life with government permission as would happen with a vaccine passport has got sod all to do with morality in my book.

Another outspoken vaccine passport evangelist is the mega-wealthy, globe trotting, executive chair of Sygnia Ltd, Magda Wierzycka. According to Wikipedia she is the richest woman in South Africa which takes some doing when you’re up against the thieves of the ANC. Never one to be accused of being publicity shy, Magda recently Tweeted a photo of herself at the US Open finals, presumably to demonstrate the advantages of being double vaxxed and having a lot of money to her 54 000 followers.

Normally a voice of common sense and reason and a well respected businesswoman, Magda has decided to do battle with Nick Hudson (a fellow actuary) of PANDA (Pandemics, Data and Analysis) by referring to his organisation on social media as a “lunatic fringe” for their unfashionably open thinking on COVID and the lockdown and calling into question the credentials of all those involved with PANDA.

The organisation includes some seriously heavyweight academics, medical experts, actuaries and lawyers and others with enough personal integrity to speak out against the current madness of the official narrative. She also re-circulated a now rebutted piece which appeared (surprise) on main-stream media and which claimed that believing in PANDA would lead to your untimely death.

But, as with a fine wine tasting, I have kept the best until last. There seems to be a growing trend amongst those who believe that they have a monopoly on brilliant ideas to write what they call an “open letter” and last week it was the turn of Piet Mouton, the CEO of PSG Group and part of what is known as the “Stellenbosch Mafia”.

Mr Mouton expressed the view in his open letter to all South Africans that it’s high time we started dealing with the vaccine dissidents in a much harsher manner.

“Our main concern now lies with those who actively choose not to vaccinate. Yes, it is an act of free choice, but it is an economically and socially inconsiderate and selfish one with far-reaching consequences. We simply do not have the luxury of engaging in poorly substantiated arguments on vaccine conspiracy”.

Mr Mouton quite correctly highlights the economic woes of the country, particularly those caused by the COVID lockdown. He highlights our abysmally high unemployment rate, the socio-economic fallout from the July ‘insurrection’, the fact that our economy is stumbling along and needs to return to normal as soon as possible.

All of which is good sound stuff until Mr Mouton brings his newly acquired epidemiological skills in and states that the vaccine is our best hope and that anybody who says otherwise is either a crackpot or wishes for the complete collapse of society. We are standing on an economic precipice and vaccines are our only hope so Mr Mouton suggests that the unvaccinated bear the burden of lockdowns as punishment for their stupidity and selfishness.

Among his suggestions (with comments by me in parenthesis) are:

They lose their right to complain about the state of the economy. (So much for freedom of expression Piet. And how would this be enforced? Would the police have the power to arrest a non-vaxxer every time he/she lamented the weakening rand or the level of corruption? And do you have a suitable punishment in mind? Perhaps ten years in a forced labour camp? )

If their business is struggling, they must accept that they have contributed to its potential demise. (So it’s because you didn’t get vaccinated that nobody is buying your goods? Why on earth did you tell everybody?)

If there is more social unrest fuelled by poverty and unemployment exacerbated by further lockdowns, they should know that they have failed to play their part in preventing it. (Er…..come again? Nothing to do with ANC economic policy then?)

They should not complain about a lack of service delivery. If the deeds offices, municipal offices, driver’s licence centres, etc. are closed because somebody contracted Covid-19, they should accept this as the consequence of their choices. (So Piet…if people get the jab will you promise that the backlog of driving licenses will be sorted out soon?)

They should not complain but should accept lockdowns, curfews and other regulations deemed necessary to curb infections. (Fine with me. I like curfews…less traffic noise)

If schools are closed, they should accept that they have failed their children and the children of the country and are preventing them from being educated. (I don’t have kids so not my problem mate)

If they fall ill with Covid-19, they should accept that seeking help from an overburdened healthcare system could have been avoided and that they are helping push our country back into lockdown. (Accepted…. now where’s the Ivermectin Doc?)

They should also accept that by overburdening the healthcare system, they potentially prevent others from accessing hospital ICUs, thereby depriving them of much needed medical care. The potential loss of lives will be at the hands of those who do not vaccinate. (I will carry this guilt to my grave which, if I don’t get vaccinated, shouldn’t be too long now).

I have no doubt that Piet Mouton means well although he appears very confused at times. But his finest comment was one I heard when he was being interviewed by Bruce Whitfield on Cape Talk’s Money Show. Expounding his philosophy for a Piet style new world order he came up with this pearler:

“We are not a rich country…if the economy fails, we will see people dying… We must get the economy going…. Our suggestion is the old and frail remain in lockdown… but we continue as normal”

I assume the ‘Our’ is the corporate view of the PSG board who, amongst other things, handle retiree’s pensions. But I’m wondering how Oom Jannie Mouton (74ish) views his son’s opinion that he should stay locked up at home and only be allowed out under strict supervision. Or indeed other members of the ageing Stellenbosch ‘mafia’ like G T Ferreira, Laurie Dippenaar, Christo Wiese or Johann Rupert. In fact, all of us, myself included, who are past our PSG approved sell by date.

If you Google the word “senicide” you will read that there is a fine tradition among ancient civilisations of getting rid of pesky older members of society. My favourite is the Scandinavian ‘Ättestupa’ which involves the said wrinklie either acting with what Piet would regard as commendable moral responsibility and hurling himself off a cliff or, if a somewhat unwilling victim, being hurled off the cliff by younger helpers.

I do hope I’m not putting ideas into Piet’s head because I would rather opt for perpetual lockdown now that BritBox is available on the telly.

My five (and a half) deadly sins