In a campaign initiated in partnership with African Students for Liberty (ASFL), Progress SA rallied students to ask pertinent questions about the retrogressing state of freedoms at UCT under the hashtags ‘is UCT free’ and ‘ask Phakeng’. Rather than attending to these concerns promptly, in a sheer act of intolerance, Phakeng took to twitter to block Progress SA’s twitter account and the accounts of students raising similar concerns.

Phakeng further made an astounding claim in response, tweeting that, “Apparently their plan is to get me to resign but I am not interested in that. #Andizi.” This single tweet neatly illustrated UCT’s unwillingness to engage students who peacefully bring matters of strategic importance to the attention of management.

Contrary to the VC’s conspiracy theory, Progress SA has no desire to force her resignation. We are only interested in sourcing answers to what we believe is a perfectly reasonable question: What is her administration doing to ensure UCT once again becomes a safe space for ideas, an institution at which intellectual and academic freedoms are protected?

Progress SA is well aware of Phakeng and UCT’s track record of pandering to regressive identity politics parroted by UCT radicals. It is quite clear that like her predecessor, Max Price, Phakeng is prepared to disregard the voices of an overwhelming majority of students and sympathise with a tiny minority of violent radicals.

Over the course of the last week the #IsUCTFree and #askPhakeng campaigns irked UCT radicals and some senior academics to the point that they have adopted cowardly, conspiratorial tactics to attack Progress SA. Such attacks vindicate the efforts of Progress SA and we consider them a victory.

Progress SA will remain relentless in its mission to ensure all public spaces become inclusive of diverse ideas. The hemorrhaging state of academic freedom at UCT should be seen as nothing less of a tragedy aided by management’s love affair with regressive identity politics. 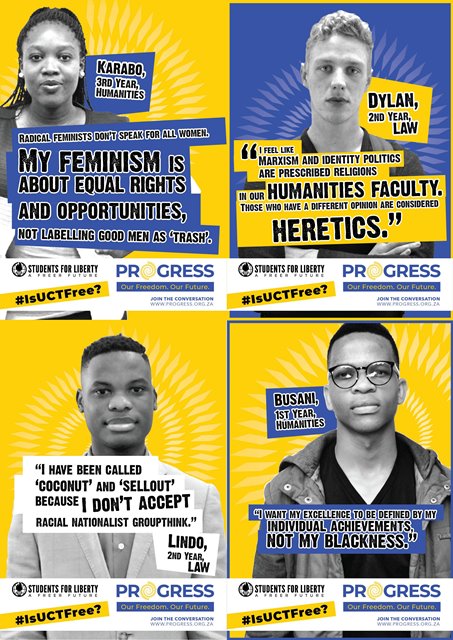 'One settler, one bullet' slogan is divisive - UCT vice-chancellor

Raymond Suttner to receive his LLM 49 years on - UCT