Portrait of a revolutionary as a young man

Catching Tadpoles: The Shaping of a Young Rebel by Ronnie Kasrils. Jacana Media, 2019.

Ja-nee, during the past week, while reading Catching Tadpoles, I have written, between load-sheddings, roughly 1 500 words about the book, or rather about Kasrils. But none of these words will appear here. Why?

Several reasons, I guess. Given that 40 years ago we were fellow Yeoville-dwellers, home of the Kasrils family, I have obviously been thinking of gorgeous “Sha-Sha Robe” (Sharon Rohrbeck), who worked for some months in “my” department (Business & Industry) at the FM. As she sallied forth from the office to do interviews she’d shout cheerily: “Got to kill ‘em with kindness, Gords, got to kill ‘em with kindness.” 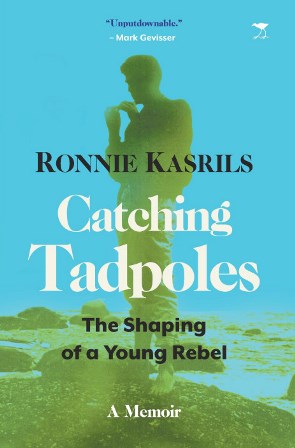 Also, it seems my daily, personally administered anger management course is working a little; Kasrils is 81 years old; and Kasrils is ostensibly so well pleased with himself, why, I ask you, be a killjoy during this season of goodwill? And, to be fair, Catching Tadpoles is about Kasrils’ first 20 years or so on Earth and therefore has little to do directly with his later “career”.

Anyway, I’m in influential company by being well-disposed towards this book. Kasrils and his publishers are not ones to bring a knife to a gunfight; and there are shout-outs at the start of the book from the great and good of Seffrican letters.

No, SA is not one of the world's most anti-Semitic countries

A Simple Man: Ronnie Kasrils on the Zuma enigma - Jacana

The Zuma year for doctors: An administrative mess

CrypTalk ep 5: What is an NFT? An overpriced picture, or the future of contracting?