Let’s rewrite our future, not our past

In 1962, during his Commencement Address at Yale University, John F Kennedy had this to say about the danger of substituting myths for truths: “The great enemy of truth is very often not the lie – deliberate, contrived and dishonest – but the myth – persistent, persuasive and unrealistic. Too often we hold fast to the clichés of our forebears. We subject all facts to a prefabricated set of interpretations. We enjoy the comfort of opinion without the discomfort of thought.”

More than half a century later, we are seeing first-hand in our own democracy how myths – “widely held but false ideas” – are employed to capture the narrative and deflect attention away from failures. This is something the ANC is very fond of doing. The longer it can keep the public attention away from its many failures, the better. But in recent weeks the practice has been turbocharged, with a more brazen rewriting of our history than ever.

We’ve had to hear, from some, how Nelson Mandela was a “sell-out”. How his project of reconciling our fractured nation was somehow responsible for the injustice, inequality and exclusion that still characterises our society today. It is difficult to imagine a more preposterous suggestion.

We’ve had to witness Desmond Tutu’s name being dragged through the mud, and aspersions cast over the important work he and the Commissioners of the Truth and Reconciliation Commission did in the 90’s.

We’ve had to watch as principled journalists – men and women who fought for truth and exposed the apartheid government – were summarily rebranded as apartheid spies in the service of the notorious Stratcom division.

We’ve had to hear repeated lies about Judge Ramon Leon following his death – newspapers incorrectly calling him the “hanging judge”, and influential commentators and politicians happily going along with the lie.

The big question is: Why? Why is there this desire to rewrite our history? Why is it deemed necessary to tarnish the names of honourable men and women in order to establish a new set of myths as the “truth”? Post-truth politics is a very slippery slope that doesn’t end well for society. Why would we risk going there?

The answer is simple. The South Africa of today has fallen far short of the promises made to millions of our people. And the people that delivered us here, a quarter of a century into our democracy, have run out of credible explanations for our present and believable promises for our future. The only option that remains is to rewrite our past to conjure up new enemies that could explain the failure of the ANC today.

This explains the obsessive arguing over past narratives. If South Africans can be convinced that the 1994 consensus was actually a deal with the devil, then this can be used to excuse the present mess and lay claim to the future.

And so we see, from the ANC, a fixation with symbolism over substance. This allows them to avoid the hard work of changing people’s lives. It buys them leeway when it comes to delivering services, holding poor performance to account, tackling corruption, fixing education and creating an environment in which South Africa’s entrepreneurial spirit can awaken.

It’s a self-serving tactic that is used at great cost to the people of this country. It ignores their lived reality and it offers them no plan to improve this reality. Instead, it just conjures up more scapegoats and enemies to blame.

Unfortunately our media are often complicit in this. They allow narratives to be framed by the ANC, and they accept their rewritten version of the past as the truth. These debates then dominate our discourse, at the expense of real stories about the failures of government in our schools, our hospitals and our communities – stories that tell of the lived experience of millions of South Africans.

It’s not easy to shift the narrative back to the issues that matter. The DA is constantly accused of not having a plan for South Africa. But the truth is that there is no other party with as many detailed and costed policies as the DA, as any cursory visit to our website would show. The trouble is that in the world of clickbait and social media soundbite politics, our plans and our policy are typically not deemed newsworthy when held up against the myths of the ANC.

This will not deter us though. The DA is the party for the future. We are not concerned with owning and rewriting the past. Our job is to convince enough people that we have a vision and a plan to build a future that works for all.

I’m talking about a truly democratic era where people go to the ballot to express their future ideals and not their race. I’m talking about a future with a healthy, inclusive economy that can wipe out the inequalities in our society derived from race. A future where our country is a sought-after investment destination and the gateway to Africa. A future where all young people receive an education that enables them to compete for a better tomorrow; where the landless can be owners and where the hungry can escape poverty.

This is the South Africa we have to build together. Because if we continue down the path we’re currently on, then we have to accept that our future is already written for us. And that is not a future I want for my children. That’s why we need total change.

Forget about rewriting the past – we need to rewrite our future. 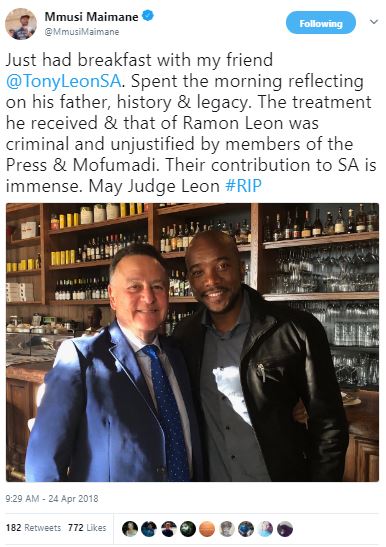 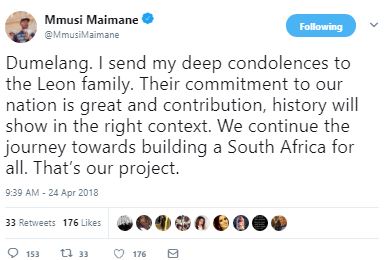 Death and the DA