Dr Iqbal Survé, executive chairman of the Sekunjalo Group, responding to critical reporting of his businesses by Business Day:

“It goes to the heart of transformation of the South African economy, that a successful black business will not be tolerated by the establishment. An independently minded and owned black business is an anathema to untransformed elements at Tiso Blackstar, Business Day and other media houses. Economists and psychologists will have a field day trying to establish whether this campaign is purely driven by business greed, politics or subliminal racism.

Subliminal racism is defined as a mental process affecting someone’s mind without them being aware of it. Racial superiority and apartheid somewhat regrettably damaged these journalists that they fail to acknowledge the success of black businesses and black executives and black people in general. By calling them subliminal racists I am being kind for I have no doubt that for many their racism is far more overt."

“In a country rich in fruit and vegetables, which in many countries are sold by street traders, this is rare in South Africa. In our rich suburbs these products are only available in the supermarkets. Are the police in collusion with these stores to maintain their monopolies? Yet in most African countries the informal sector constitutes a major factor in employment creation and providing incomes for the poor.

It seems that the only way this could change is by a national accord that all, I repeat all, discriminatory practices based on racial categories be removed and that affirmative action be reinforced. This has nothing to do with anti-whiteism or reverse colour bars. It is about building a fair and egalitarian society and burying our apartheid legacy for ever. The compromises reached in 1994 have long passed their sell- by date and we desperately need a genuine new beginning.”

“It has been 20 years since the inception of the Employment Equity Act, however the pace of transformation has been very slow. Relative to the demographics of the Economically Active Population (EAP) as released quarterly by Statistics South Africa, marginal progress in relation to the equitable representation of the designated groups, in particular Africans, Coloureds and persons with disabilities have been made in the middle-to-upper occupational levels, which is repeatedly visible in the statistics contained in all the Commission for Employment Equity (CEE) annual reports.”

Among the provisions of the new amendment bill, designed to enforce racial and gender proportionality in all levels of the workforce, is the Insertion of section 15A of Act 55 of 1998 “which will allow the Minister to —identify national economic sectors for the purposes of the administration of the Employment Equity Act;” and “establish numerical targets for these sectors.”

Message from the Yes4Youth registration portal if you confess to being non-black: 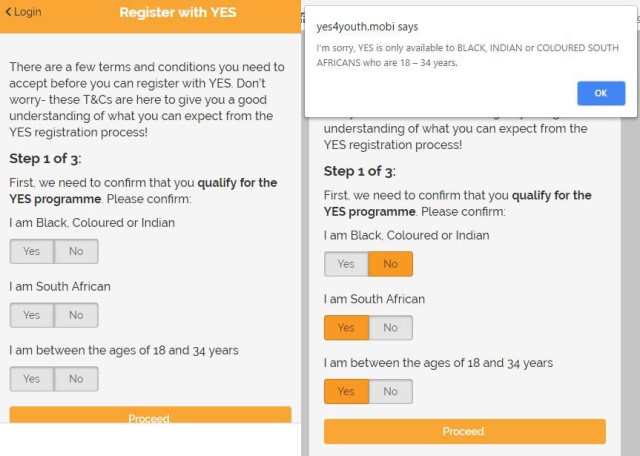 Statement issued by the organisation after a controversy broke over the matter:

“YES aligns with government aims to redress the skewed economic realities as outlined by the B-BBEE Codes of Good Practice. Companies that participate in YES can earn points on their B-BBEE scorecard. YES is thus required to align with the B-BBEE race requirements stipulated in the Codes, which state that B-BBEE is intended for black, Indian and coloured South Africans. We are structured to collaborate with companies that have chosen to adopt the B-BBEE mandate.

However, for those companies not wanting to participate in YES for B-BBEE purposes, we will connect them with all job-seekers who fit their job specification – regardless of race, and including white youth. We have updated our registration process to provide an avenue for job-seeking white youth to create a profile (through our partner organisations) and be connected with such opportunities. The YES movement is bigger than race.”

“Please note that in order to comply with section 7(2)(a) of the Legal Practice Act, 2014 (Act No. 28 of 2014) and subject to the availability of the candidates, two black women, two black men, one white woman and one white man with the highest number of votes in their respective categories will constitute the six advocates who will serve as members of the South African Legal Practice Council (“Council”).”

Black Lawyers Association statement defending the need for such quotas:

“The legislature was aware of the bleak picture in the governance of the legal profession when it enacted the LPA that, when constituting the Council, one of the factors to be considered was the racial and gender composition of South Africa. It legislated as such because it knew that the demographic representation in the profession is about 60% white, 40% black, 67% men and 33% women… If the statistics of the legal practitioners is anything to go by the ‘one man one vote’ approach proposed by Mark Oppenheimer will perpetuate domination of the governance of the profession by white males for a number of years to come.”

Extract from the JSC interview of Adv J J Strijdom SC for the Gauteng Division of the High Court 11 October 2018:

JM: How does your appointment help us to transform the judiciary?

JJS: … Sir, as I have already said, umm, uh, the… I am in favour of transformation, as you… but I cannot say how my appointment will … help transformation.

JM: No, no, you support transformation then you can’t be subjective. In supporting transformation you ought to tell us now, how does appointing YOU, help to transform the judiciary. Since you are a supporter of transformation.

JM: It doesn’t help us right.

JM: Appointing you doesn’t help us to transform the judiciary. Am I right?

“This nonsense where they keep saying ‘we don’t know who to brief because we don’t know you guys’ must really come to an end because you know its name — it’s racism. Pabasa wants to stop racism at its root and we want to stop the sweet-talking nonsense. So if I mess up a case, I shouldn’t get the work. But if I win a case, I shouldn’t be excluded just because I’m black. We have to start by breaking down these patterns of privilege that reinforce whiteness…. When you appear before a judge, it should be expected that if you are white, you could be talking rubbish, and if you are black you could be talking sense. But it is the other way around currently. That is our own experience.”

The Legal Resources Centre setting out some of the reasons why Velaphi Khumalo’s comment on social media that “white people in south Africa deserve to be hacked and killed like Jews" and their “off springs used as garden fertilizer” does not amount to hate speech:

“Whilst the content of the expression can be challenged, there is no doubt that Mr Khumalo was responding to a discussion about race in post-apartheid South Africa. The nature of his expression was political. Were it purely personal, less value would be attached to it. However, Mr Khumalo was engaging in a discussion in the realm of the political…. The complainant identifies the target group as white people and people of Jewish descent. Mr Khumalo used an unfortunate metaphor, but he did not aim his attack at Jewish people. It was against white people, particularly racist white people.

The identity of the group targeted by the alleged hate speech is important for the balancing exercise. The more vulnerable the individual and the group, the more likely it is that inflammatory language could lead to violence and cause psychological harm. Conversely, speech is scrutinised less strictly where it is targeted at the powerful or dominant. Mr Khumalo’s speech was aimed at the dominant, not the vulnerable….[T]he identity of the alleged perpetrator is important. For example, where the alleged perpetrator is a member of a vulnerable or historically oppressed group, this may call for greater tolerance of offensive speech.”

Ayesha Fakie of the Institute for Justice and Reconciliation on Heritage Day (Mail & Guardian):

“An empty whiteness and white heritage of pillage and plunder combine into a subconscious need to sublimate the meaning, intention and richness of Heritage Day into a relatively more ego-soothing “Braai Day”. I call this white narcissism. It is white narcissism because it denies persons of colour a claim to even the name of a day dedicated to our histories and cultures, while foregrounding fragile whiteness. It obfuscates violent white heritage through denialism, while being unable to define a positive white culture without once again contrasting it with black culture.”

“If you think of elite South African schools they were built for a purpose. They were built to dispossess black people of their land with the sole purpose of exploiting them…. When we look at elite schools, we have to look at how they produce and reproduce power in our society…. We would have western food as a norm and African food as a treat. When we really look at the traditions and the legacy of these schools, we actually see that they are reproducing bullying, whiteness and they are not really transformed.”

"I spoke with Jan van Riebeeck last night. He says he's going to do bad things to South Africa if expropriation without compensation happens."

Jan ain’t coming back. He is in the 7th ring of hell being tortured by the spirit of every black person who ever lived. His foul ass is waiting for you in hell. 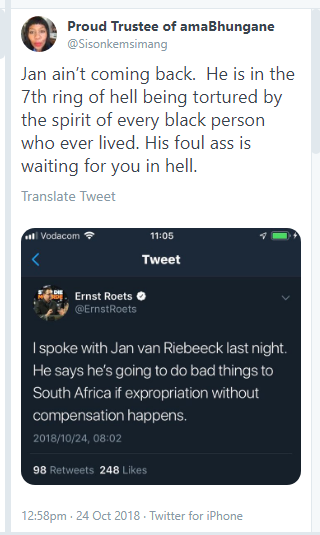 Raceballs 12: Prelude to a pogrom

Raceballs 11: The road to Zimbabwean ruin

Raceballs 10: Return of the Fallists

The JSE needs to innovate as delisting flurry continues