Official Almanack of the People’s Republic of Racial Lunacy

“They kill one of us, they kill how many?”

“They kill one of us, they kill how many?”

“They kill one of us, we kill how many whites?”

“Those people overseas that are taken in by this message of whites in South Africa being under threat, they are looking at South Africa through the lens of black versus white. And South Africa has long moved away from that. In the main, most of them are racists. And they are not very positively disposed toward black people. Their voice, a seemingly prominent voice, is because they are talking on race issues and saying there is a racial war. There is no racial war in South Africa. White South Africans are working with us to resolve this [land] issue.”

“White people who came [to the hearings on EWC], all of them, poor or rich, the landless white people, all of them came in unison, and opposed the expropriation of land without compensation. Because the reality is that where white interests and privilege is threatened, they protect one another. And they don’t care whether the other one is in the wrong or not. Why would people think alike like that? If it is not an issue of racism and privilege which seeks to perpetuate landlessness amongst those who were conquered by criminals who came into our country and took our land.”

Article by Omphemetse S Sibanda in the Daily Maverick responding to Belinda Bozzoli’s critique of UNISA’s obsession with race quotas:

“Blacks do matter. There is a growing movement stereotyping blacks negatively as a group, which is resonant of the manner in which they were treated during the apartheid era. Both explicit and implicit in these utterances is the heightening wave of ethnocentrism, and refusal to think positively about blacks. The level of racial micro-aggressions and macro-aggressions against blacks is now becoming blatant, and unambiguously pronounced. By racial macroaggressions I include daily verbal, behavioural, or environmental indignities – whether intentional or unintentional – and communicating aggressive, offensive, or negative racial insults towards blacks.”

Article by Kgagudi Morota for the Unisa Black Forum responding to the same article:

“So treacherous are these times that the late sage Keorapetse Kgositsile warned that such times are dangerous to live in. He was referring to this absurd dispensation in which the past is miraculously swept under the mysterious apparition called the rainbow, whose objective is to whitewash centuries-old damage to the black majority by a white settler minority. The result is a wholesale delegitimisation of black pain in pursuit of the dubious objective of social cohesion in the absence of justice.”

Tweet by Radio 702 talk show host, Bongani Binqwa, on AfriForum for raising awareness around the issue of farm murders in SA:

“Of the 20 000 murders recorded in SA last year - only 46 were white people on farms. The vast majority of murder victims in SA are black - by focusing attention on "targeted killings of whites" is an organization like #AfriForum hurting or helping social cohesion? #702Breakfast” 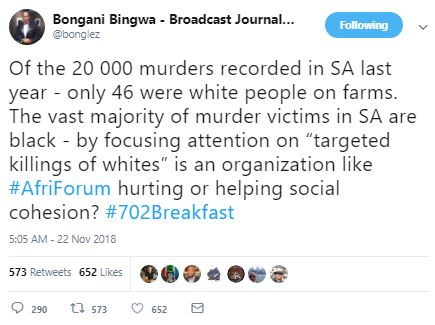 Sisonke Msimang in the Financial Times on the “positive power” of black (racial) anger in SA politics:

“Twenty-five years ago, when the African National Congress (ANC) committed black South Africans to forgiving their white compatriots, the story of South Africa was set in stone. South Africa’s failure or success would always be seen through the prism of Mandela’s vision of forgiveness and his commitment to personal integrity. A new generation of South Africans is asking tougher questions about reconciliation and justice, and is beginning to challenge the cronyism that has strangled the ANC. Their anger is seen by many outside the country as an indication that South Africa is falling apart. What is less evident is the extent to which this anger has served as a constructive force.”

“It’s true that news organizations, in my view, under-report from South Africa. But the reality they under-report is that white life is amazing. The average household income for white-person-headed households in South Africa, according to a 2016 survey, is five times the average income of a black-headed one. They are almost 10 percent of the country’s population and still possess nearly three fourths of its privately owned agricultural land. It’s arguably the world’s finest quality of life—oysters, golf, fine wine—for the cheapest prices on earth. We buy a fillet of smoked salmon at the upscale grocery for more than most of us pay our black maids per day.”

Article by Joe Brock for Reuters on AfriForum:

“Conversations with a dozen members of Afriforum at its rallies and elsewhere, reviews of its social media accounts and private text messages sent by its members reveal an increasingly influential movement with an agenda that divides South Africa.”

“In South Africa, no land has been seized and while violent crime is a huge problem, the vast majority of victims are poor and black. Of 20,000 murders in the last recorded year, 46 were white people killed on farms, according to police data.”

“Every president since Nelson Mandela led South Africa out of white-minority rule in 1994 has tried, and largely failed, to redress an imbalance whereby whites - nine percent of 56 million South Africans - own more than 70 percent of agricultural land. Ramaphosa is competing in next year’s election with a far-left party exploiting anger at persistent rural destitution among blacks alongside wealthy, white-owned commercial farms.” 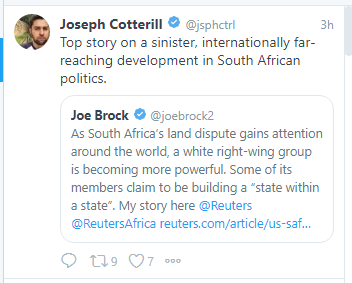 Headline of an article by David McKenzie and Brent Swails on the CNN website on the lurch towards Expropriation Without Compensation of white-owned land (and other property) in South Africa:

“Land was stolen under apartheid. It still hasn't been given back”

From a long feature article in CNN by the same authors on the tiny fringe Suidlanders group headlined: “They're prepping for a race war. And they see Trump as their 'ray of hope'”:

“Investigators from the Southern Poverty Law Center (SPLC) and the ADL in the US say that the Suidlanders and other South African right-wing organizations are successfully taking their storyline of white victimhood to the US….Heidi Beirich, the director of SPLC’s Intelligence Project, agrees. Her team monitors scores of hate groups in America and closely follows the Suidlanders. ‘It is this idea that white people are the victims instead of the aggressors of these processes. But, of course, you have to sell that narrative. You want to be the victim, you don’t want to be the aggressor, or you will get no sympathy. It is like Holocaust deniers trying to minimize the genocide of Jews to salvage Hitler’s ideas,’ she says. But how do South African groups cast themselves as victims? After all, the apartheid government was a notorious aggressor.”

“This is why I view blanket criticism of ‘identity politics’ and ‘racial classifications’ with suspicion – otherwise I would not have taken part over the years in as many gay pride parades as I have. It is for this reason that I reject as simplistic and false, the argument that it is inevitably immoral for oppressed people strategically to invoke identity categories that have been used (and continue to be used) to oppress them, in order to use such categories as tools to resist that oppression. Tentatively embracing such classifications can either be used to achieve bad or good ends, depending on whether they are used to oppress or to resist oppression – much like a knife can be used to stab somebody to death or save somebody’s life when used in open heart surgery.”

Raceballs 12: Prelude to a pogrom