Official Almanack of the People’s Republic of Racial Lunacy

Xolani Gwala: Andile Mngxitama you might say is an extremist and he is a lone voice out there but there is general anger particularly among young black professionals, who are now saying ‘wait a minute, we were told to go to school, we were told that this a country for everyone, but we get to the private sector, and we are still not getting the promotions, we are still treated badly, and all of those things. So if you look, particularly on social media, there is quite a lot of anger.

Gwala: It is building up.

Ramaphosa: It is anger. And it is justifiable anger. It is justifiable and that is precisely what we keep saying. White South Africans and those who have power in their hands must realise that the black majority in this country are becoming more and more impatient about their lackadaisical commitment to inclusion, their lackadaisical commitment to recognition of black young people and black people in general. The racist acts that have been happening have been happening largely from white people. And we are saying ‘that must come to an end’. And that is the message we are preaching, and we must continue to preach.”

“We remain the only nightmare to Rupert and fighters we should be very proud about that. Proud because all those who protect and speak in defense of whiteness must suffer political palpitations and respiratory problems because of the @EFFSouthAfrica EFF. Salute #Asijiki” 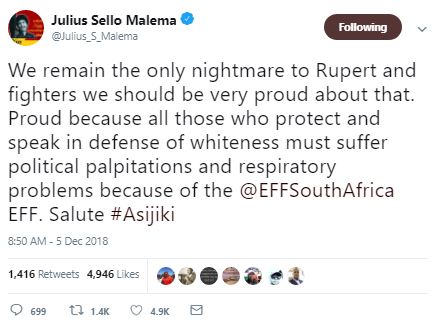 Adriano Mazzotti, director of cigarette company Carnilinx on his political stance, as quoted in the Daily Maverick:

“It is no secret that Mr Malema and I have been friends for over a decade. I have always been and remain an ANC supporter and have made donations to the ANC. I supported the ANC historically and continue to do so under the leadership of President Ramaphosa. I am entitled to have different political views to my friends although I support the EFF’s view on the Freedom Charter.”

Message from the Abantu Book Festival, held in Soweto:

NB: Abantu Book Festival is, and has always been, for BLACK people. Only. We will not be forced into saying so-and-so is not allowed. That’s not our chosen vocabulary, and that’s not what we’re about. We ask for the utmost respect in this regard. Thank you. #AbantuBookFest 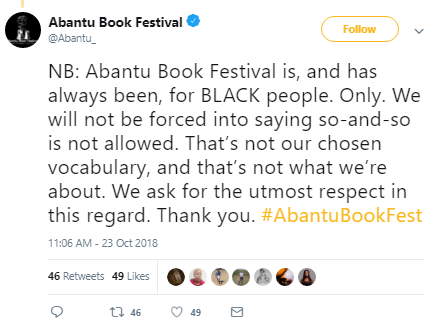 Query from one aspirant attendee:

@Abantu hi, I’m excited about today's events have a white friend who has mixed race kids (teenagers) who really wanna come, she wants to know whether she can come with them?

Hi, it is for Black writers and readers only.
The kids can come.

Black only spaces are an important and sacred opportunity that should be harnessed in a time where we’re allowed to use our agency to create forums where we can share. Where we can heal. Where we can learn. Where we can breathe freely and inhale an oxygen free of the patterns of white dominance, supremacy and everyday racism. Where we can be with one another and offer understanding and support and define ourselves in our own terms.

But then again, my experience at the festival left me feeling poorer and not richer and this, it begs saying, was through no fault of the organisers, and also, not because there were no white people. It is because even though this was a blacks only space, the conversation was pillaged by thematically white conversation. You see, whiteness still managed to occupy mental and conversational space in a room full of intelligent black people who fell into the trap of the presence of white privilege even without their very physical existence.

EFF spokesperson Mbuyiseni Ndlozi in the Daily Maverick responding to Thabo Mbeki on the land question:

What begs for attention throughout this discussion is the question of white identity; what then of whiteness? A left and radical version of non-racialism ought to reject the white identity all together. In the least it must be as shameful to be white and to perpetuate being white as it is to be a Nazi. To be white is only ever important as a marker to distinguish oneself from blacks, which means as long as there are whites, there must be blacks. To be white is to presuppose your superiority based on your skin colour over someone who you define as black and therefore inferior.

Black First Land First is outraged over the murder of Anele Ziko, the assault and attempted murder of two other young boys in Langeloop village in Mpumalanga by the racist settler colonizer Sarel Du Plessis.

It is clear that the racist killer Sarel Du Plessis is an agent of land thief, Johann Rupert's right wing millitia. It is clear now that white farmers are emboldened to kill, enslave and abuse our people in South Africa by Rupert. When Johann Rupert appeared on Power FM he promised to unleash unspeakable violence on black people. Further adding that he has the power to invoke black-on-black violence.

To that @BLF_SouthAfrica reiterates for every 1 black person Rupert kills, we retaliate with 5! Racist land theives have orchestrated black-on-black massacres in South Africa since the 1980s. We can never allow that to happen again. Johann Rupert has declared war on black bodies and BLF reiterates that it is time for our people to defend themselves. The black oppressed community of Langeloop must do what is right, break the chains of the farm and count to five anything white. #RupertisaKiller 1:5

Settler colonizers have come for our children, @BLF_SouthAfrica reiterates the call for black people to defend our communities and defend our land by any means necessary! 1:5 #RupertisaKiller Land or Death

EFF MP Hlengiwe Octavia Mkhaliphi’s speech in the debate in the National Assembly on the draft resolution on the Establishment of an Ad Hoc Committee to Amend Section 25 of the Constitution, Thursday, 6 December 2018

“We knew then there would be a massive fight-back campaign by the beneficiaries of racism and land dispossession and that they would seek to demonise this process to undermine it and raise various scare calls to discourage us from amending the Constitution to take back our land from the land thieves. Over the past 24 years, the country has struggled to deal decisively with the history of unequal land distribution because of the land thieves who came to South Africa and stole our land!

The EFF has the proposal for the constitutional amendment ready to help ease the work of this committee. We are going to teach you how to move forward if you want to be a part of South Africa. Otherwise, if you want to go to Canada, you must just pack your bag and go. We don’t care! Firstly, all land in private hands must henceforth be expropriated without compensation and placed in the hands of the people as a collective, not the small white minority – in the hands of the people of South Africa! Your time is up, white people. The democratic state is the custodian of all land held on behalf of the people.”