Official Almanack of the People's Republic of Racial Lunacy

12. Minister Fikile Mbalula complaining about a pair of Nike sneakers in the colours of the “apartheid” (New York City) flag:

What are this colors @nikestore @Nike they look like old apartheid flag ? pic.twitter.com/04rTFQsZy3

11. Stephen Grootes in the Daily Maverick on the case against Julius Malema, supported by AfriForum, for assaulting a white police officer:

“Malema tries to portray that he is the only person prepared to fight “whiteness”. The constant replaying of the video may demonstrate that Malema and Ndlozi, and the EFF in general, are prepared to do what no other politician does – push white people around. There are many black people in South Africa who have been pushed around, physically and otherwise, by white people. Very few have ever pushed around white people, physically or otherwise. At a time when it appears that there has been very little change in our society, and when racialised inequality and economic apartheid are still the dominant features of the economy, this may well have a powerful resonance.”

10. The American sociologist and “White Fragility author” Dr Robin DiAngelo on the shocking racial impertinence of white South Africans, as reported in the Daily Maverick:

“As someone who grew up in poverty, DiAngelo says she could eventually overcome her poverty to go on to be an academic and to earn her PhD largely because of the opportunities that came her way because of her skin colour. Her point is she didn’t have a double struggle of being poor and black. “In a society like South Africa, how can a white person feel so confident that their opinion is equal to someone who swims against the current? It’s the height of arrogance,” she says.”

9. The Institute of Justice and Reconciliation’s delusional poster on the current state of “racism” in South Africa: 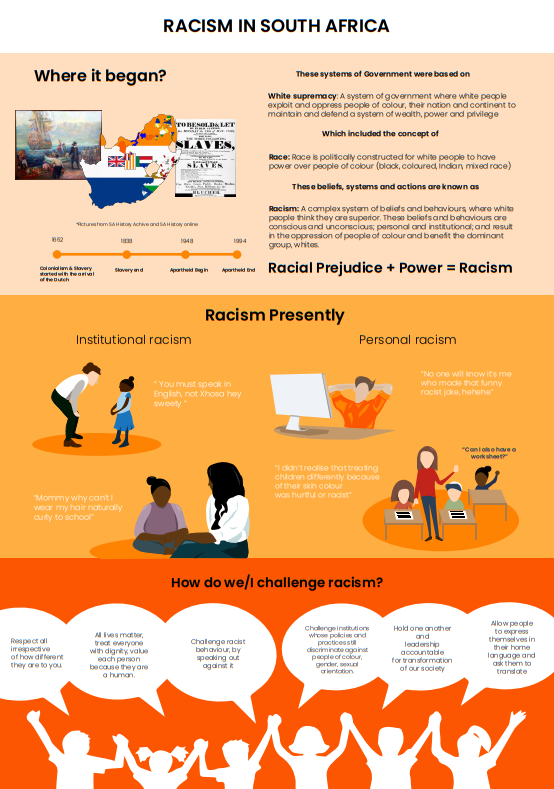 8. Suspended Cricket SA CEO Thabang Moroe’s rise to the top, as explained to Craig Ray of the Daily Maverick:

Moroe was an MTN call centre manager while serving on the board of Gauteng cricket. With the support of union president Jack Madiseng, he quickly rose to the position of CSA vice-president in 2017. That same year, Moroe, Cricket SA President Nenzani and CFO Naasei Appiah then decided to work the incumbent CEO Haroon Lorgat out of his position, so Moroe could take over. Ray’s source explained:

“Out of the blue the CFO [Appiah] laid 12 charges against Lorgat, including being anti-transformational. A fact-finding mission was carried out as a result of these charges and it came up with nothing. What this fact-finding mission did instead was put a strain on Haroon’s relationship with Appiah. It is also common knowledge that Thabang and Appiah were trying to get rid of Haroon. A major part of the reason was this idea that Lorgat wasn’t Africanising CSA enough. There was this narrow African transformation agenda that they were trying to install and they found Haroon to be a stumbling block.”

7. Minister Pravin Gordhan reportedly resisting the appointment of the most experienced business rescue practitioner available to take over SAA because he was white:

"There was more haggling over the business rescue practitioner, with Gordhan insisting on a black professional while the board felt he lacked the experience that the grave situation demanded. Gordhan, who has been accused of purging black executives and promoting whites in SOEs, was concerned that the “optics would be wrong if a white practitioner was appointed”, said the insider. In the end, veteran practitioner Les Matuson – who has managed business rescue at African Bank, Evraz Highveld Steel and Vanadium, Steinhoff’s Mayfair Holdings and some Gupta companies – was appointed by the board. He will work alongside a mainly black team from audit firm Deloitte."

6. EFF leader Julius Malema’s defence of Iqbal Surve’s Sekunjalo Independent Media, in the light of the PIC’s liquidation application against the company:

"Independent Media must be allowed to exist. It is the only news agency that doesn't follow the cabal. It will be a sad day in this country if we only have the media of the cabal. After Independent Media they'll come for every black executive in this country. Pravin thinks he is powerful. From the 80's he has destroyed all black people who disagreed with him. As the EFF we have taken a position to stand against Pravin, therefore we are calling on all progressive forces to defend SIM. If we must we should take to the streets.”

5. Dr Ralph Mathekga explaining on News24 why it is a myth to say that “affirmative action is responsible for all policy failures and corruption we have seen in the public service”:

4. The exclusionary manner in which magistrates were selected (or not selected) by the Magistrates Commission in the Free State, as described in a recent High Court judgment. 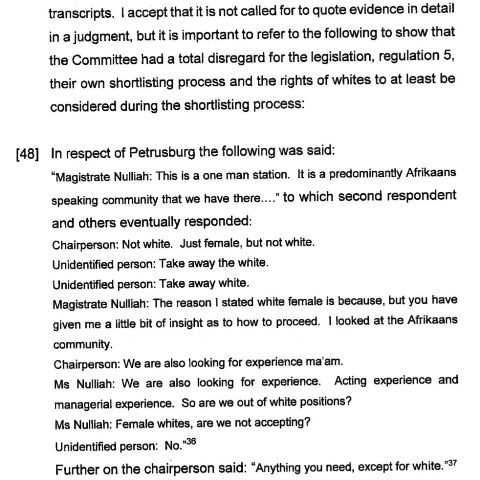 3. Eskom’s decision under Brian Molefe to rapidly escalate the prioritisation of short term coal supply contracts, as reported in the Sunday Times.

“[Ex Eskom CEO Brian] Molefe defended his policy to broaden Eskom's coal-supplier base. He told the Sunday Times the move away from contractors was "to change the complexion of the contracts. The preference was for BEE companies." He said he had never been in favour of Eskom paying companies to mine coal for it, as had been common in the past. But experts said Eskom's hundreds of short-term suppliers had brought issues of: Much higher transport costs for the utility because suppliers are not always close to power plants; Substandard-quality coal slipping through checks because Eskom's quality controls department has been "gutted"; and A lack of expertise by some suppliers. In July, Eskom predicted it would pay 20% more for its coal this financial year because of its short-term supply contracts…. Energy expert Ted Blom said when Molefe arrived at Eskom he "went berserk, curtailing ... long-term contracts". He said poor-quality coal was a big concern. "Worldwide, 'fine coal' limits are 10%. That's to ensure power plants can function. When it rains, fine coal becomes sludge and cements conveyor belts, and damages boiler and ash systems.”

2. The continued denial by leading journalists and politicians that past EE and BEE policies have had anything to do with Eskom’s current predicament:

I find the assertion that the position that Eskom (SOEs in general) finds itself in Is caused by BEE and race based policies pedestrian. I have yet to see any empirical evidence of such. Someone prove me wrongs and show me eskoms suppliers and the long term contracts in SOEs.

Really? Who should they have voted for? Which party would have fixed Eskom in 7 months? Lest we forget that the same ANC once ran a transformed, profitable Eskom. Let’s rather focus on the true culprits: the Zuma cabal and their parasites, incl @McKinsey, who sucked Eskom dry. https://t.co/8OWCXoaJ3j

1. President Cyril Ramaphosa’s praise of Zulu King Dingane, on Reconciliation Day, for ordering the attack on and mass slaughter of the Voortrekker parties, including women and children, in Natal:

"This day of the year was proclaimed as the Day of the Vow by our apartheid rulers to remember the fierce battle in 1838 at the Ncome River between the Voortrekkers and the Zulu people under His Majesty King Dingane. In that historic battle, brave Zulu warriors with assegais succumbed in large numbers to the firepower of the Voortrekkers, and, it is said, the Ncome River ran red with the blood of these freedom fighters. For they were freedom fighters, because they were fighting for the freedom of our land, and they sacrificed immensely, fighting against invaders.”

Govt has ‘dropped the ball’ on Covid-19 vaccine procurement. What now?