At about 2.15 pm [15 February 2016] a group of protesters moved towards Smuts Hall and Mr [Masixole Mlandu], the second appellant, climbed up to the roof and spray- painted the bust of Jan Smuts, that stands above the entrance to the residence, with red paint. The protesters applauded this action… At about 2.00 pm on 16 February Mr Mlandu, painted a number of slogans on the War Memorial that stands above the rugby fields and commemorates persons with a connection to UCT who had died in or were affected by the First and Second World Wars. The slogans on the front of the memorial read ‘F*** WHITE PEOPLE!!’ and ‘F*** BLACK EXCLUSION’, while those on the reverse read ‘1652 MUST GO!!’, ‘UCT IS A SITE OF CONQUEST’ and ‘UCT IYAKAKA MOER!’….

Mr Mlandu said that he defaced the statue of Jan Smuts because it represented colonial oppression, white supremacist views and racial hatred. He accordingly regarded his actions as constituting legitimate forms of protest. As regards the slogans on the War Memorial he said that they were political terms and intended to debate racism both within and outside the university. His view was that he was ‘entitled to a political speech intended to trigger legitimate political debates about racism and the university’s tolerance of it’. – From SCA judgement in the case of Hotz vs UCT dealing with the Shackville protests of February 2016.

On 10 February 2016 when some students were in a dining hall on the campus and it came to the university’s attention, as a result of postings on social media, that Mr [Slovo Magida] was there wearing a T-shirt with the slogan ‘KILL ALL WHITES’ written in large letters with a marker pen on the back. In response to these reports [UCT’s investigations manager] Mr Ganger left a message for Mr Magida to come and see him and when he did so told him that he had received complaints about the message on the shirt and that it constituted hate speech and incitement to violence. Nothing seems to have come of this save that Mr Magida allowed Mr Ganger to take a photograph of him wearing the shirt. An insert of that picture is as follows: 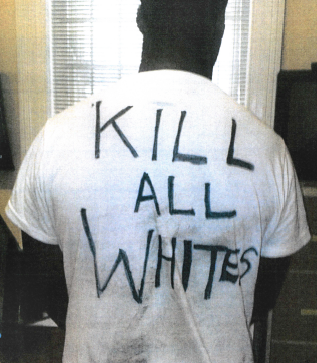 There is no evidence that Mr Magida was seen wearing the shirt during the Shackville protest. Mr Magida’s affidavit said that he had told Mr Ganger that the slogan on the shirt in fact read ‘sKILL ALL WHITES’ and that this was an artistic form of expression. He said that what was intended was that if anyone came closer they would have realised that this was the wording of the slogan and in coming closer and seeing this ‘the opportunity for dialogue and/or debate about the living standards of marginalised people and the constant fear of black people by white people is realised’. Mr Ganger’s response was that even from extremely close the ‘s’ was barely visible. It is certainly completely invisible on the photograph taken by Mr Ganger. - SCA judgement again.

Editorial: It’s into the closet with you, Ramaphosa