Ramon Leon as he really was

My father was a modest man with, to paraphrase Churchill on Attlee, little to be modest about. The youngest Queen's Counsel in the British Commonwealth at the age of 33, a High Court judge at 41, Chancellor of his alma mater, Natal University, before he had turned sixty, President of the Swaziland Court of Appeal until the redoubtable age of eighty and a judge of the Lesotho Court of Appeal in retirement – appointed to both in 1995, Ramon Nigel Leon lived a long and distinguished life.

An avid reader, my father bequeathed to Tony and me a love of books, politics and current affairs. Living largely in the world of ideas, he likewise bequeathed to us a general lack of practicality evidenced by an experience recounted by my uncle early on in my parents' marriage when the lights fused in their Parkview flat. My father's solution was to suggest an early night to my mother rather than attempting to switch on the mains. Something I know with which Michal can identify well.

My father was intellectually rigorous and accordingly a demanding parent. He expected the best from everyone, not least his sons. When Tony had a less than distinguished matric at Kearsney College, my father's solution was to confine him to the house with very limited hours for socialising let alone telephone calls. Although Tony typically referred to this period as Colditz, where he was kept in close confinement from Mondays to Saturday afternoons, it worked well as evidenced by his entry to Wits and a distinguished academic career.

Unlike me and very much like Tony, he was obsessive about time and punctuality. Newspapers in particular had to be delivered on time twice daily; the dog at one point being trained to deliver them and whisky being served promptly with ice and water at 6 pm, a habit which Tony follows religiously. I remember driving with my father and Jacqueline for his installation as Chancellor of Natal University in 1984, of which he was justifiably proud, and having to stop en route because we were predictably an hour early. Airports were another story of early arrivals and insistence on porters being arranged well in advance, of which Etai can recount many a story, owing to my father’s legendary bad back and obsession about missing the flight.

My father was passionate about politics which I suspect was his first love rather than law. A strong believer in non-racialism, a member of the Liberal Party and a founder member of the Progressive Party in 1959, he instilled in both of us a fascination about politics which in my case was somewhat evanescent, but in Tony's more permanent. As a very young child, I remember how, fearing arrest, Alan Paton, the leader of the Liberal Party and distinguished author of Cry the Beloved Country, had to spend the night in our South Ridge Road, Durban home during South Africa's first State of Emergency. In the end only his passport was confiscated while many of his colleagues were harassed, tortured, detained or worse. 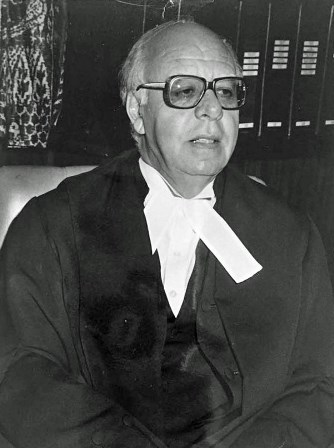 Despite his love of politics, my father was a fine lawyer with a great sense of justice and humanity. In his years at the Bar in Durban in the ninety sixties, in addition to developing a considerable commercial practice, he successfully defended a number of ANC and PAC members accused of sabotage and similar capital crimes in the Cato Manor case. As a judge for over twenty years, he had a reputation for fairness, decency and humility. This is now overlooked in the opprobrium now levelled against him in the Zondo case, arising from the bombing of the Amanzimtoti shopping centre in Christmas 1985, where three adults and two children were killed and forty others injured, in which my father imposed the mandatory death sentence, in the absence of extenuating circumstances.

What is conveniently forgotten are his singular judgments, in successive states of emergency in the 1980s, setting aside draconian media regulations in Natal Newspapers v the State President and in Hurley v Minister of Law and Order in which he was the first judge in twenty years to rule that police powers of indefinite detention under section 6 of the infamous Terrorism Act, 1967 had to be objectively determinable. Neither judgment was reversed on appeal notwithstanding an extremely executive minded Appellate Division.

That brings to another point about my father: his sense of equity, justice and fairness. As a lawyer, he had an additional gift which was an uncanny sense of the right answer to the issue before him, leading a number of his colleagues appropriately to describe him as Nose rather than Leon J.

When my father was a young advocate in Johannesburg, which he joined in 1948, he shared Chambers with Joe Slovo, then a leading light in the Communist Party before it was banned. Appalled by the apartheid government's racist legislation and ongoing attack on civil liberties, my father defended Nelson Mandela in some of the earliest public order charges brought against him, something which Mandela typically never forgot.

It was unsurprising then that when the Mandela Administration took office in 1994, he appointed my father to no less than three judicial commissions of inquiry: into the restructuring of the judiciary in which he and Gus Hoexter recommended giving it proper functional, rather than simply institutional, independence by placing it under the Office of the Chief Justice, rather than the Department of Justice (something which took years to happen but ultimately did); into the Vaal Reefs mining disaster in which 100 mineworkers were killed in one of the worst mine accidents in South African history and finally into the rewriting of South Africa's antiquated mine health and safety legislation, culminating in the Mine Health and Safety Act, 1996 which remains one of the most progressive pieces of legislation of its kind in the world.

I always think of my father as Chaucer's 'veray parfit gentil knight' - in the Prologue to the Canterbury Tales or, in modern English, 'A very perfect gentle knight' - something to which all of us aspire but, which to my mind, my father perfectly embodied.

What should a new SA Mining Charter look like? - Peter Leon

Does mining have a future?

PANDA responds to Geffen’s hit-piece on PANDA and its co-founder, Nick Hudson