Richard Spoor charged with assault for pointing finger at policeman

Human rights lawyer Richard Spoor has been charged with assault for pointing his finger at a police officer.

Spoor is an attorney for Xolobeni residents opposed to mining in this remote part of the Wild Coast. On 23 September he and other protesters confronted the Minister of Mineral Resources at a community meeting. Scuffles were reported.

Spoor was arrested and appeared in court on 25 September. The case has been adjourned until 25 October. His charge sheet reads: “The accused did unlawfully and intentionally assault” Major General Andre Swart “by pointing him with a finger”.

Over 100 police officers were reported to be in the hall when Mantashe addressed the community. Spoor was one of about 300 people removed from the meeting according to the Amadiba Crisis Committee. The charge sheet states that Spoor has been charged under the Transkeian Penal Code, Act 90 of 1983: Disobeying a lawful order of police.

In an interview with eNCA Spoor said that he was asked by an official of the Department of Mineral Resources (DMR) to intervene in the protest. Spoor attempted to do this by making space for residents who were unable to get in and calling for quiet. Police then came in and formed a “human shield” between Xolobeni community members and the rest of the crowd. Spoor approached General Swart advising him to remove the line of police. The two got into an argument. Spoor then went to approach Minister Mantashe and when Mantashe called him forward, Spoor said he was “grabbed by the police” and “roughed up” and subsequently charged with incitement to public violence and later the other two charges (assault and disobeying a lawful police order).

Spoor is set to appear at Bizana Magistrate’s Court on 25 October. 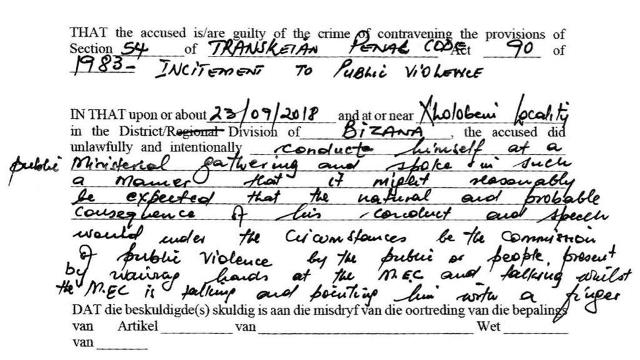 This article first appeared on GroundUp. Images via https://twitter.com/JohanLorenzen/

"Lawyers in black and white: Spoor vs Boqwana" - GroundUp