{{testingGreg}}=testingGreg
Spilling the beans from beyond the grave - OPINION | Politicsweb

Spilling the beans from beyond the grave

I know, I know; there are reviewers, including me, who just having read a certain book, grow highly excited; they figuratively jump up and down, only to realize some days later that there are more than a few fine books and that they should rather have waited to “recollect their emotion in tranquility,” as Wordsworth wrote.

But yesterday I did feel as though I’d been holding my breath during the three-four hours it took me to read Prisoner 913. I just couldn’t wait to move onto the next “revelation”.

Stemmet is a senior history lecturer at the University of the Free State (UFS). De Villiers is these days billed as “editor and contract publisher,” but was formerly a journalist on several local publications. As a Rand Daily Mail cadet journalist in the late-70s, I was privileged to watch him and his sidekick Ike Segola practising quiet, unassuming but highly effective journalism. (Helen Zille, among others, was also on the staff then.)

In 2013, Stemmet opened a box at the Archive for Contemporary Affairs (ARCA) at UFS and found a vast set of files about Nelson Mandela’s last eight years in prison. They’d been assembled by then justice and prisons minister Kobie Coetsee.

Coetsee, when he’d left his ministry shortly before “the transition to democracy,” put the documents, probably illegally (they were mostly “uiters geheim” and government property), among his own papers and had been about to show them to Stemmet when he, Coetsee, died suddenly in 2000. Stemmet didn’t “find” them till 13 years’ later. 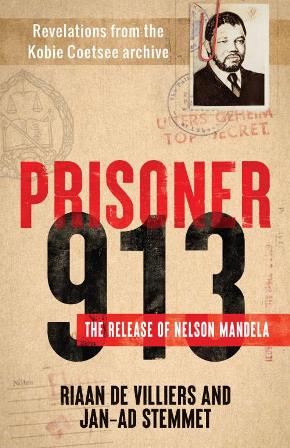 In Prisoner 913 Stemmet and De Villiers, drawing on the Coetsee archive, divulge a plethora of compelling and previously unknown information about Mandela’s last eight years in captivity. (913 was Mandela’s number in the then prisons system; it was only on Robben Island that Mandela was prisoner 466/64, prisoner 466 of 1964, which has since become famous.)

What happened was that Coetsee ran what De Villiers calls a “a second-track intelligence operation, aimed at monitoring everything Mandela and some other prisoners said or did, and utilising this knowledge to inform his own agenda as well as government strategy.

“Put differently, Coetsee used his position to become Mandela’s ‘gatekeeper’, jealously guarding access to his ‘star prisoner’, and placing himself in a position to control or influence the entire process surrounding Mandela’s incarceration and eventual release” (p. 7).

In short, as De Villiers explains, the documents and transcripts contain a wealth of material about every aspect of Mandela’s incarceration, ranging from secret government memoranda and other documents to medical reports, letters, press cuttings, and handwritten notes.

And, of course, the archive also contains transcripts of the clandestine recordings of many of Mandela’s conversations with a stream of visitors while in prison, ranging from foreign dignitaries and the Commonwealth Eminent Persons Group (remember them?) to government ministers, his lawyers, family members, fellow “security prisoners” (as they were known), and others then active in politics.

So, the transcripts of the recordings plus all the other material provide a “unique window” on Mandela’s beliefs, motivations, strategic decisions, and actions at the time.

In the view of De Villers and Stemmet, the paramount thrust of the archive is, first, that it reveals that the covert collaboration (NB: as in “cooperation” not as in “colluding”) between Mandela and the last Nationalist Party government went far further than is generally known, and included “an attempt by Mandela to broker a deal between the apartheid regime and the ANC in exile prior to his release”.

Second, the large cache also reveals – remarkably – that FW de Klerk made Mandela an offer that, if Mandela had accepted, would have “fundamentally changed the latter’s role in the South African transition”.

It certainly would have. The offer was for Mandela to become “an adviser” to the government, to become part of the “government team,” during the “transition,” once he was released. But it seems Mandela turned a blind eye to this proposition.

There is lots more tantalizing material. This includes, as the authors point out, that Mandela repeatedly offered to act as “facilitator” between the NP government and the ANC; that some of Mandela’s proposals for a negotiated settlement cut across accepted ANC policy (whoops!); and that Mandela, with the collaboration of Coetsee and the Department of Prisons, launched an extensive campaign, while installed in his cottage at Victor Verster Prison, to meet as many released prisoners and other political leaders as possible, with a view to moderating their political views and strategies [my emphasis].

In addition, that from December 1989 onwards, again with the government’s knowledge and approval, Mandela began to talk to the ANC leadership in Lusaka, conveying various requests and proposals, including the terms of a proposed negotiated settlement; that the ANC responded by moderating some of its public statements, notably its 8 January statement in 1990, at Mandela’s (and effectively the government’s) request; and that talks between Mandela and the government about the terms of his release and a negotiated settlement continued up to De Klerk’s address on 2 February.

New light is also cast on one of the most puzzling “issues” in the story of Mandela’s release, one that at the time baffled people ranging from Margaret Thatcher and foreign diplomats to the ANC’s leadership in exile. I.e., Mandela’s apparent reluctance to leave prison.

His reluctance turns out have been due to his efforts to get a “package he could take to Lusaka,” which he wanted to achieve before he was released – because he felt that by refusing release, with the “whole world” clamouring for him to be let out, he had stronger bargaining power. The documents show that Mandela was “greatly discomfited” when De Klerk told him without warning, on 9 February 1990, that he would be put out into the outside world two days later.

What the authors have done throughout their presentation of the “Coetsee material” is to compare it with Mandela’s account in his autobiography, Long Walk to Freedom (1994), and De Klerk’s in his The Last Trek: A New Beginning (1998), as well as with Niël Barnard’s Secret Revolution: Memoirs of a Spy Boss (2015).

Of course, the accounts of both Mandela and De Klerk immediately become augmented and many gaps are plugged.

Let me interpolate at this point that, besides being a fine contribution to our political history, a first-rate piece of historical research, and an outstanding example of investigative journalism, one of most impressive things about Prisoner 913 is the care, precision and knowledge with which the document trove is moderated and annotated.

With this in mind, and referring to my point above that Mandela’s “collaboration” was about “cooperation” not “collusion,” De Villiers notes at one point that: “[R]eaders may be surprised, and perhaps even taken aback, by some of the disclosures involving Mandela [especially in connection with Winnie Mandela; see here].

“However, for us – having lived with the archive, including aspects which remain undisclosed, for several years – [Mandela] has grown rather than diminished in stature, and become more human in the process. It also makes his eventual ascent to the leadership of the ANC and the South African presidency all the more remarkable. Perhaps, then, the archive is also valuable because it reminds us – as Mandela himself was wont to remark in later years – that he was no saint, but a (flawed and fallible) human being” (p. 14).

I don’t think these are PC comments. Any reader who goes through the book will surely agree that these comments are an accurate reflection of Mandela’s character. Notwithstanding the enormous pressures he was under from all sides (including “difficulties” with Winnie), Mandela really does try extremely hard to be a “facilitator” and peace maker, and to remain fair to his comrades, while at the same time sticking to his principles.

Walter Benjamin in “Theses on the Philosophy of History” famously remarked that a historian should “regard it as his/her task to brush history against the grain”. Benjamin meant something different, but in effect Prisoner 913 does just this. By which I mean that much of the generally accepted history of Mandela and his last years in prison is in this book amplified, elucidated, and therefore changed. So, therefore, should some of the issues that are still debated to this day.

To take just one example, it has been cogently argued, mainly by Anthea Jeffrey and by others, that the ANC, especially from 1990 onwards, in the run-up to the first democratic elections, consciously and systematically adhered to a National Democratic Revolution blueprint.

But what does strike one when reading Prisoner 913 is what an organisational shambles the ANC was. If ever there was a tale of broken telephone, miscommunications, lack of unanimity, lack of clear direction, etc., it can be found here in the detail of Mandela’s attempts to negotiate a settlement with the NP government while trying to include the party leadership, both outside SA and those in jail, as well as other “players”.

Of course, Mandela was in jail, as was the rest of the internal ANC leadership. But if the ANC leadership, as reflected in this book – see especially pages 195-7 – was capable of a conscious and systematic adherence to anything, I’ll eat my non-existent hat.

Reading Prisoner 913 – notwithstanding that Mandela would emerge from jail in February 1990 – it seems that most of what transpired in the years around his release and leading up to the first elections was more a confused melee than anything else.

I began by writing that I felt that I was holding my breath during the reading of this book. Now that I’ve expelled it, and taken some breaths, what is there in this book that, as it were, “changes” anything?

Nothing, I suppose. What we do have in this book is a much clearer and more cogent picture of what happened during Mandela’s last eight years in captivity, of Mandela himself, and how just about everyone, whatever their own various agendas were, tried harder than we perhaps realize to do things for the good of the country.

Otherwise, the world, as VS Naipaul wrote, remains what it is.

I had reason the other day to speak, for the first time in years, to Mac Maharaj. He’s now 85, living in Durban, and needs to walk every day due to the after-effects of, and complications relating to, a lung cancer operation.

So, during lockdown 5, when we weren’t allowed out at all, he went for a walk on the Durban beachfront, replete with mask. Three policemen surrounded him – and told him to go home. He explained that he must walk every day. They repeated that he must go home.

Turning pugnacious, as he has ever been wont to do, Maharaj said: “You fxckxrs have been chasing me all of my life – and you’re still chasing me. What’s the matter with you?”

He then shouted: “Do you know who I am?” The one cop replied: “Yes, of course I do. That’s why we’re not arresting you – just telling you that you must go home.”

SLR: #WhitesMustPay and what it means for future generations