Which young people leave home and when?  No publically available survey has been designed specifically to answer this question, but, with a little ingenuity, a picture can be coaxed from the General Household Survey (GHS).   The GHS defines a household as one or more persons occupying a single dwelling, all of whom must have been present for at least four nights in the week preceding the Survey, and this must be the core of our concept of ‘home’ [1].  Households are now quite small in South Africa.  The 2015 GHS found 53 762 570 people in 16 121 989 households, an average of 3.33 persons per household.

But what kind of home might a young person leave?  Answering this question uses the following information in the GHS:

- The relationship of each person to the household head.  There are nine categories of relationship:

8. Other relative of head

9. Person not related to the head

The operating definition is that a young person is staying at home if they satisfy at least one of the following conditions:

1. At least one of the young person’s biological parents belongs to the household.

3. The young person belongs to relationship category 4 (brother or sister of head), provided that there is neither a father nor a mother known to be alive and living in a separate household.

4. The young person belongs to relationship category 8 (other relative of head), is no older than 24 and is at least 10 years younger than the head and that there is neither a father nor a mother known to be alive and living in a separate household.

All other young people are regarded as having left home.

The rationale for the operating definition has several components.

- Young people who are heads of households or husbands/wives/partners of heads have established their own households, except when at least one parent is present.

- Non-related persons have usually left home and are residing in another household.  However, some persons recorded as belonging to this category have a parent in the household.

- Relationship category 4 (brother/sisters/stepbrothers/stepsisters) is more complicated.  Brother and sisters of the head may be living with the head, because the next generation up have died or otherwise left the household.  This raises an interesting point.  Normally, we think of a young person leaving home when he departs from the dwelling of his parents or guardians.  Here another concept comes into play: people may leave ‘home’ while remaining in the same dwelling, because their parents or guardians have left.  Alternatively, brothers and sisters may move in once a head has established a home, in which case they have left their own household.  A brother or a sister is regarded as having left home if either (i) the father is known to be alive and living elsewhere, or (ii) the mother is known to be alive and living elsewhere.

- Relationship category 8 poses the greatest problem, because it is a residual category.  The relatives could well be the relatives of the husband/wife/partner, where one exists, as well as the relatives of the head.  They could even be fictive relatives in some cases.  They can be of an earlier generation than the household head (aunts and uncles), the same generation (brothers-in-law or sisters-in law) or a later generation (nieces and nephews).   Nieces and nephews may be under the effective guardianship of the head or husband/wife/partner and are regarded as stayers if they meet Condition 4.    Otherwise they are regarded as leavers.

Note:  The term ‘lost’ refers to parents who are either dead, or who are not known to be either dead or alive.

Does this classification of young people into leavers and stayers work?  Figure 1 suggests that it does a reasonable job.  The proportion of the age group which have left home rises with age, from about 3.5% at age 15 to 70% at age 34.  The curves for men and women are essentially the same up to age 24, after which the proportion of women who have left is slightly greater than the proportion of men.

The implication is that the number of youth stayers is greater than the number of youth leavers for the 15-34 age group, as Table 1 indicates.  Of the just under 20 million young people, as estimated by GHS 2015, roughly five-eighths are still at home. 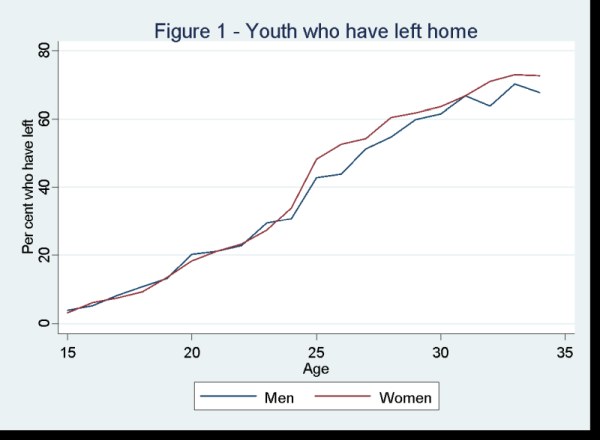 Table 3 sets out stayers and leavers by gender.  As Figure 1 indicates and Table 3 confirms, the differences between young men and young women are not great, with a slightly greater proportion of young women leaving home.  The age at which leavers first outnumber stayers is 27.

Table 3 - Stayers and leavers by gender

The indicator of whether young people are staying at home or have left is approximate, but it yields plausible results.  The next brief will consider possible reasons why some young people leave home and why they stay, and analyse their effects.

What does community survey show about immigration and emigration of foreign born?