Charles Simkins looks at reasons for leaving home and their impact

There are four main reasons why a young person may leave home:

2. He or she may enter into a union (either marriage or cohabitation).  One may distinguish between young people who have never been in a union from the others, based on information in the 2015 GHS.

3. He or she may lose both parents.  By ‘lost’ is meant that the parents are either known to be dead or it is not known whether the parents or dead or alive.  This is the case of the household leaving the young person, rather than the other way round, as discussed in the first brief.  An indicator of lostness can be constructed from the 2015 GHS.

4. He or she may move without the household having moved at the same time.  GHS 2015 has no information on migration, but the 2016 Community Survey does.  An indicator can be constructed using the methods set out in migration briefs already published [1].  A move means a move across local authority boundaries.

Because information about reasons 1 to 3 are all found in the 2015 GHS, one may determine (a) if all reasons exist and (b) if any reason exists.  It would have been desirable to integrate reason 4 in the same way, but this is not possible since information on it is drawn from a different data set.

The analysis here is what demographers call a ‘period’ analysis.  It does not represent the experience of any actual cohort, but of a hypothetical cohort experiencing at successive ages the conditions in 2015 (or 2016 in the case of migration).

Proportion of young people not employed.

Proportion of young people never in a union.

Proportion of young people who have not lost both parents.

Proportion of young people who have not moved.

One minus the proportion of young people who are employed, in a union, and have lost both parents.  This is the “all” curve

One minus the proportion of young people satisfying at least one of the following conditions: employed, in a union, have lost both parents.  This is the “any” curve. 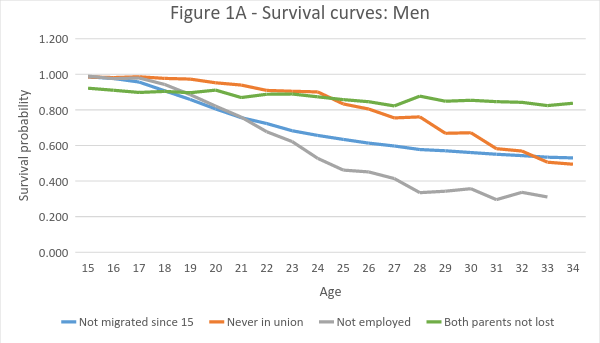 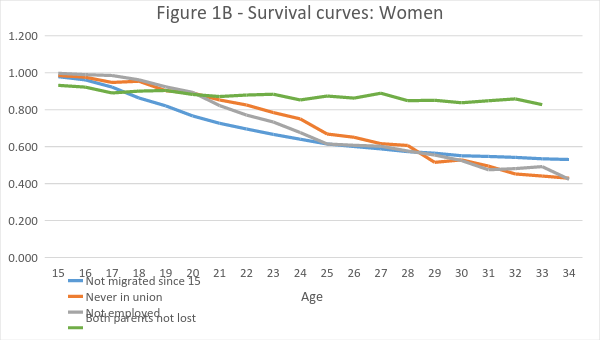 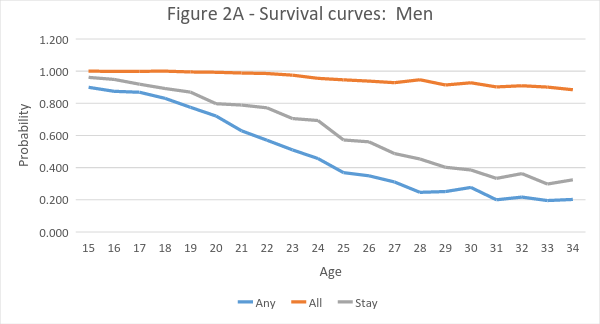 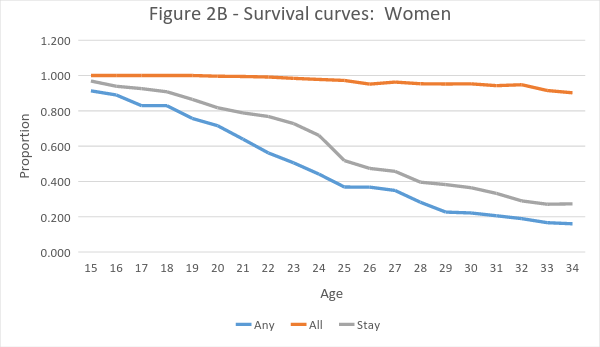 Figure 1 displays the survival curve until each individual event occurs: employment, entry into union, loss of both parents and migration since the age of 15.   Figure 2 displays survival to the first event (excluding migration) as the “Any” curve, survival until all three events have occurred (the “All” curve), and survival at home until leaving (the “Stay” curve).  Figure 2 confirms the statement in the introduction that none of the three events are decisive in causing young people to leave home, since the “Any” curve lies below the “Stay” curve. 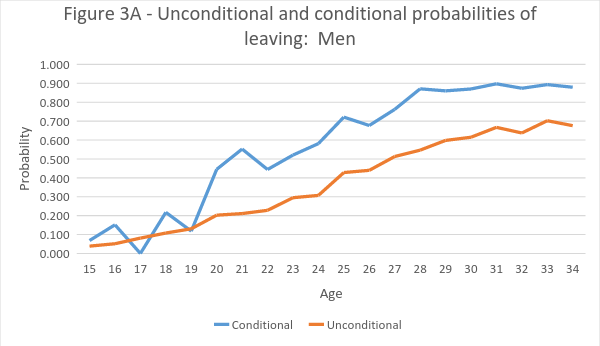 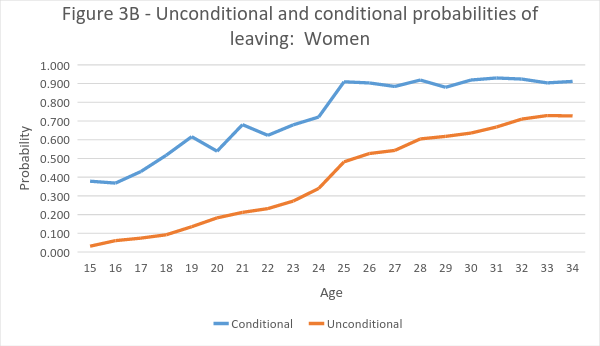 The gaps between the conditional and unconditional probabilities indicate the influence of ever having been in a union on leaving.  The effect starts at a younger age for women and is stronger than the effect for men up to the late 20s. 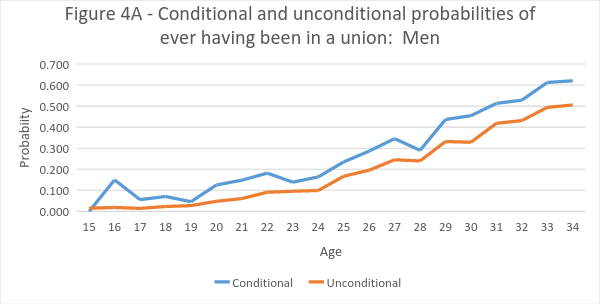 Figure 4 shows that employment improves the probability for men, but not for women.

A couple of final points:

1. The table in the Appendix shows that while one or two of the reasons for leaving are not decisive, satisfying all three conditions is decisive.

2. The upward slope of the curves in Figure 3 show that age by itself increases the probability of leaving, over and above the reasons for leaving.

The analytical findings can be summarized as follows:

1. The conditions encouraging young people to leave households can be divided into two groups:

- Entry into employment, being or ever have been married or cohabiting, and loss of both parents.  These three variables are all derived from data in the 2015 General Household Survey and interactions between them can be observed.

- Migration, where the information has to be taken from a different source: the 2016 Community Survey.  Migration interacts with the other conditions, but we have no information on how.

2. Employment has a positive influence on whether men are, or have been, in union, but no similar effect on women.  To put the point another way:  employment increases the marriageability of young men, but not of young women.

4. Satisfaction of one or two elements of group (a) in Section 1 increase the probability of leaving home.  All young people satisfying all three of the conditions have left home.

5. There is a pure age component of the probability of leaving home, over and above the influence of encouraging conditions.  Put simply, the older a young person gets, all other things being equal, the greater the probability that he or she has left home.

Implications of High Court ruling on PRASA board