Figure 1 shows the historical and projected evolution of gross domestic product per capita from 2014 to 2023. 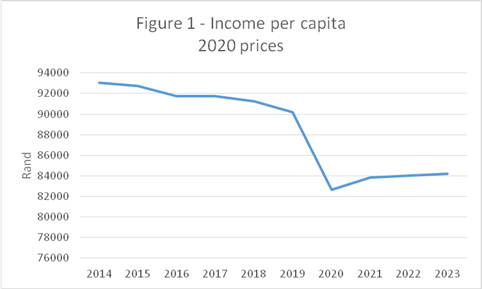 The main budget framework is displayed in Table 1.

THE TRAJECTORY OF PUBLIC DEBT

Beyond 2020/21, government has considered two scenarios: a passive approach, in which South Africa continues on its current trajectory and debt spirals out of control; and an active scenario, in which major reforms and fiscal consolidation are implemented rapidly to stabilize debt in 2023/24. Cabinet has adopted the active approach, which sees the debt to GDP ratio peaking at 87.4% in 2023/24[1]. This will require spending reductions and revenue adjustments amounting to approximately R250 billion over the next two years[2]. The adjustment will be larger if downside risks identified in the February budget materialize: a lower than projected saving in the government wage bill, further bailouts for state owned enterprises, problems with road tolls. We are watching the dance of the seven veils, and we shall have to wait until the October Medium Term Budget Policy Statement to see how the government intends to tackle that challenge. In the meantime, the following back of the envelope exercise gives an order of magnitude sense of what is involved:

It’s that brutal. The Zuma legacy and misfortune have made it so. Adjust, or be adjusted.

The Constitutional Court and the Electoral Act

Decision making in a time of uncertainty