The Afrikaners' fight for survival

MODERN HISTORIANS and a lot of journalists lost in academic fog (the former) or Too Much Information (the latter) have – in recent decades/centuries - not been too kind to the Afrikaners – the continent’s famous/infamous White Tribe of Africa.

It’s as if they’d gathered-up, without thought or balance, every racial sin committed since the days of the slave trade by every Western nation under the sun and piled them onto the back of a goat called ‘South Africa’ and then drop-kicked it into the boiling wasteland of the desert, hoping never to seen the broke-backed beast again.

Biblical Jews knew getting rid of tribal sin wasn’t that easy. For them, the release of the scapegoat into the wilderness became an annual, not a once-in-a-lifetime gesture.

Sweet Lord, there here must be a lot of goats out there at the moment.

Yet, how right those Ancient Hebrews were. Bad things, bad people horrible memories aren’t finger-kissed away on a once only basis. They don’t melt like dew on leaves when the sun shines. They’re not short-lived like hangovers or one-night stands.

So welcome Kajsma Norman, author of this new and mercifully well–written and quite short account of aspects of recent South African history and how it impacts on the Afrikaners.

Whoever said the Past is another country should be shot. It’s a shibboleth that should be thrown in a waste dump. The past is a living, breathing partner of the present, a Friend or foe of the future and this more than welcome book is a start to putting the Afrikaners not only into perspective but also in to present day South Africa.

Although fewer in number, diminished in power, easy victims to media condemnation or worse ridicule, Afrikaners do have a future in South Africa whether leatherheads like Julius Malema and supporters like it or not.

And if anyone thinks the title represent a nostalgic, warm cuddle-up to the country’s sordid past – think again.

In his foreword to this London-based Swedish author’s book, the late/great Swedish novelist (creator of Wallander), Henning Mankell, writes: “Thick- skinned and fearless, she (Norman) has embarked on a daring journey through South Africa, deep into the landscapes of the tensions that still prevail there. It’s soon clear to me that she represents a new generation. Her eye isn’t mine, even though we both see what we see: injustice, oppression of women and the living, breathing racism that is not just a lingering ghost. . . Here are her conservations from journeys in the country that not long ago kicked out the hateful system of apartheid and left it to die on the garbage pile of history.”

The book is divided into twenty-nine easy-to-read sections, each of them based on events that follow December 16 when in 1838 the Battle of Blood River took place – an event that was the platform upon which the Afrikaner people stood and with exceptions, stand today. 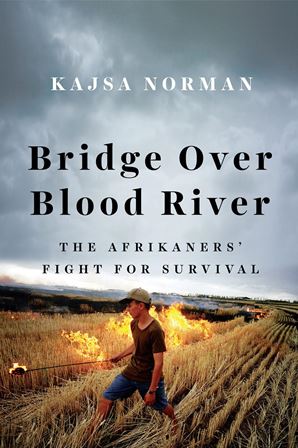 Most of the book is set in Orania (stop laughing readers of the’ New York Times’ – it’s not the joke you think it is and white lives do matter) that racially exclusive settlement in the de-populated fringes of the Karoo desert, set up in the 1990s by Afrikaners who wanted no part of the new South Africa, the much lauded Rainbow Nation that sadly should be re-named - Rambo Nation.

In that strange little republic, the truly remarkable thing is there are no black servants. Whites have to do every ordinary task from cleaning the street(s) to mowing the lawns, doing the dishes, turning out the garbage.

As Menkell wrote, here is a writer with great courage. She gets her hands dirty. She meets real people. The mobile phone has no role, thank God. She listens and records. She pitches her tent by the site of the Battle of Blood River and watches without admiration or condemnation how the descendants from the days of the Greak Trek and British –designed concentration camps that cost around 26,000 lives during the Anglo-Boer Wars behave.  She hears their life stories, notes their idiosyncrasies, writes about their fears and hopes and paints in a remarkably moving way their greatest fear of all – assimilation leading to extinction.

Living at the edge of a fast changing world, some of the residents of the breakaway settlement are experiencing what Oswald Spengler called “second religiousness” – you do something not because you believe in it any longer but because it gives you a warm feeling inside, remembering the past. Okay no-one accepts your currency or your flag but it’s YOUR unwanted currency and YOUR un-noticed flag.

Just how far are young Afrikaners prepared to go to preserve their culture, their way of life – themselves?

The question is loud, the answer only just audible in this book, anyhow. Can you just shut the door and answer No to the world outside? But why and try to participate in a society that makes it abundantly clear you neither wanted nor needed any longer?

Are these remote men, women and children in Orania all that different from the much more politically correct whites who so identified with the ANC in the 1990s but who now live in gated communities in Johannesburg, Cape Town, Pretoria?

Like Henning Menkell, Norman visited Mozambique where she interviewed a young South African (white) journalist who wanted to get to grips with the “real” Africa. In Maputo she find the Third World Groupies involved with various NGOs and humanitarian projects are almost as far away from the local people as Afrikaners were from blacks in the bad old days. But the rhetoric is different.

Frans de Klerk, CEO of the Orania Company and the town’s municipal manager, told the author that it was easier to get Zuma to understand the idea behind the Afrikaner initiative than it was Mandela.

In a telling statement, he said –“In 1995 it was still early days and Mandela was going to build a Rainbow Nation where there would be no need to escape to a separate community. Zuma, on the other hand, identifies very strongly with Zulu culture and seems to better understand the desire of people to remain a people and preserve their culture.”

Zuma as inspiration to a new generation of Afrikaners and their separatism? Malema, too with his childish chants about machine guns and Boers.

Towards the end Kajsa Norman has an interview with Hermann Giliomee the liberal Afrikaner historian.

She asks him how long will the Afrikaners survive? He asks her how long the Swedes will survive.

Ask Jews what they most fear. Some have the courage to say.

Here’s a book that deserves a place on the libraries shelves of schools, colleges and universities not only in South Africa but also in English speaking/reading Commonwealth countries where the study of Africa is taken seriously.

Full of humour, it ends on a truly sad note – the failure of the Afrikaners and black majority to open a bridge between Ncome and Blood River museums, places that tell different versions of the same story.

History is written by the winners, yes. But often it’s more interesting when told by the losers.

Two years ago today (December 16) the bridge was completed. So far, no-one has crossed it.

“And so there it lies, “writes Kajsa Norman, “Reconciliation Bridge – its gates closed and its locks secured, in one last effort to keep the armies of past and future crossing.”

Trevor Grundy is an English journalist who lived and worked in Central, Eastern and Southern Africa from 1966-1996. He lives in Canterbury, Kent, England. He is the author of’ ‘Memoir of a Fascist Childhood’ (William Heinemann, London 1998 / Arrow Books, London 1999

A Handful of Hard Men: A review

Shoprite exits Nigeria – What makes Africa such a challenging place for SA retailers?