Zimbabwe’s government-owned and controlled newspaper “The Herald“ said on March 8 that when “Chinhoyi 7” opens at Ster Kinekor in Sam Levy’s Borrowdale Village, Harare, it will be a red carpet affair.

“The event,” its entertainment editor said, “is a red carpet with socialites, film directors, actors, diplomats and celebrities among others gracing the premier.”

Among “the others” one supposes there will some of the men and women who were alive and active in the struggle for Zimbabwe when, in April 1966, a group of guerrillas from the Zimbabwe African National Union (Zanu), then led by the Reverend Ndabaningi Sithole, crossed the Zambezi River from their bases in Zambia and attacked sections of the white-officered Rhodesian army with its access to bombers and helicopter gunships.

Close to the Mashonaland West town of Sinoia (today’s Chinhoyi) seven of the insurgents ran out of ammunition and were all killed.

The attacks signalled the start of what’s known in Zimbabwe as Chimurenga Two (1966-1979) the war against whites led by Ian Smith of the Rhodesia Front, whose government declared an illegal declaration of independence (UDI) on November 11,1965.

The shooting of the film started in September 2014.

More than 100 local and foreign actors participated in a production meant to salute freedom fighters whose surviving companions went on to watch the Union Jack flutter to the floor at Rufaro Stadium on the night of April 17, 1980 to be replaced by the new flag of Zimbabwe.

The film project is a joint venture between the Zimbabwe Defence Forces (ZDF) and Honde Valley Television in Canada.

Chinhoyi 7 is a brainchild of Honde Valley Television’s director Moses Matanda who is based in Canada and who was four years old when the famous confrontation took place.

In an interview with The Herald (12 September, 2014) Matanda said that the film would give an African perspective to the struggle: “In many cases, the history of Zimbabwe is very Anglo-centric and biased. It shows the supremacy of whites over black people. It portrays black Zimbabweans as barbaric and as a people stealing land from white people. This is incorrect and I am willing to share the true history of Zimbabwe with the world through film.”

He added: “The film also seeks to honour Zimbabwean liberation war heroes who are still depicted as terrorists by white media houses. A younger generation of Zimbabweans born after independence in 1980 still has to be taught a lot about our war and independence.”

He could not disclose the budget for the movie but the two-hour film was commissioned by Vice President Constantino Chiwenga when he was Commander of ZDF.

In their pro-Zanu (PF) book “The Struggle for Zimbabwe, “David Martin and Phyllis Johnson described the Battle of Sinoia (Chinhoyi) as “a publicity coup which has profound psychological and political significance.”

The Zambezi raids have been written about in a large number of other books about the seven year Rhodesian War that cost in the region of 35, 000 African lives.

But this is the first time the Zimbabweans have told their own story on film about the attack when a group of Zanu fighters attempted to blow up a power pylon near Sinoia, 60 miles from Salisbury(Harare).

In his book “The Past is Another Country” the British writer Martin Meredith said that the explosives did not detonate and all members of the group were killed later. He said: “On May 16 the remaining Zanu guerrillas killed a farmer near Hartley, Henrik Viljoen and his wife. After the attack they split up and were given some assistance by the local population. But all were eventually shot or captured.”

Historians and political commentators will, hopefully, comment on the accuracy or otherwise of the events in Matanda’s film.

Some accounts say that there could have been as many as 21 guerrillas at the battle.

Some writers insist the guerrillas were wiped out: others insist say the insurgents brought down four helicopters of the Rhodesian forces.

Some writers claim that the Chinhoy 7 group was sent into the country ill-prepared just to make a statement to the Organisation of African Unity (OAU) to get financial support for the recently formed Zanu.

Meredith said that prior to the raid, President Kenneth Kaunda of Zambia, allowed the nationalists to set up bases in Lusaka in the expectation that they would produce results but that he was disgusted by their performances.

Meredith wrote: “He (Kaunda) denounced the nationalist leaders living outside Rhodesia whom, he said, talked so much and achieved so little.”

He quoted Kaunda as saying: “I have grown tired of talking to these gentlemen who are so fond of chicken-in –the- basket (a Lusaka restaurant speciality). You call them nationalists. I call them stupid idiots.”

Zimbabweans have had to wait 52 years to see one of their most famous legends/myths on the screen.

In April 1966, Zambians had to wait two days to learn that a shooting war had started next door to them.

The first reports about serious fighting in Mashonaland West came across the telex wires on 27 April. The story was firmed-up the following day and the editor of the Lonrho-owned English language newspaper Times of Zambia in Ndola, Richard Hall, knew history was being made.

The paper’s chief sub, a Scot called Gordon Rollo, supervised the printing and layout of a front page story for April 29.

Hall wrote the headline –The Battle of Sinoia.

But that year, every print setter, every compositor and every reader in the works at the paper’s heads office was white. The majority of them were unhappy about living under black rule (Zambia was independent on 24 October, 1964). Most were waiting for their contracts to end so they could pick -up hefty bonuses and head off to a new life in “secure and civilized “ Rhodesia or South Africa.“

I first set foot in Africa on 28 April (1966), a lettuce- leaf green newcomer from England flown in from London on a BOAC VC10. Indigenous Europeans hated our guts and called us communists - VC10 wallahs, media mercenaries on two-year work permits in Africa to stir up blacks and then leave as fast as we came in.

But some of the best journalists and most courageous media campaigners I ever met were on the Times of Zambia and Zambia News at that time. I honour them all. Dick Hall was the editor of the former. Stuart Murray, the editor of the latter.

At the airport at 6 am April 28, 1966 Hall told me something “big” was happening inside Rhodesia but he didn’t say what.

Later that day, a New Zealand journalist called John Edlin said that war had broken out and we’d probably be bombed the next day. So the best thing to do was park my suitcase and guitar at the editor’s house and go as fast as possible to the Coppersmith Arms, Ndola’s favourite watering hole. We stayed there all day and most of the following night preparing for the retaliation that never came.

When the paper was supposed to be put to bed and go to print, the whites in the printing works led by a former RAF technician known as Nobby who’d have got a part in Dad’s Army without any casting problems. He refused to set Hall’s headline saying it wasn’t a battle at all. A battle was something involving dignified and trained men in uniforms standing up and fighting one another with the voice of Winston Churchill somewhere in the background.

No, said The Nob.

This was just a cowardly incursion by terrorists pumped up with dope and booze.

They refused to print the editor’s headline.

Only after hours of talking and the promise of extra bonuses did the printer’s agree to a compromise – but it was very much on their terms.

Instead of the “The Battle of Sinoia, the headline on April 30 read “Slaughter in Sinoia.”

The printers celebrated that night at a pub called The Elephant and Castle owned by the former Mayor of Ndola, Len Catchpole and his brother Jack, who’d been the official hangman during the days of the Central African Federation (1953-1963).

That night, Jack looked at me, a VC10 communist if ever there was one, with disgust written on his face.

Nobby said loudly to anyone who’d listen – “And guess who the f …..s were who got slaughtered.”

And he expressed anger that someone had let the word “battle” appear in the strapline above the main headline.

I doubt that Moses Matanda will have any of that in is long –awaited film.

But if Woody Allen ever makes one about how Africa was liberated from white rule. . .

The front page of the Times of Zambia as it eventually appeared in print: 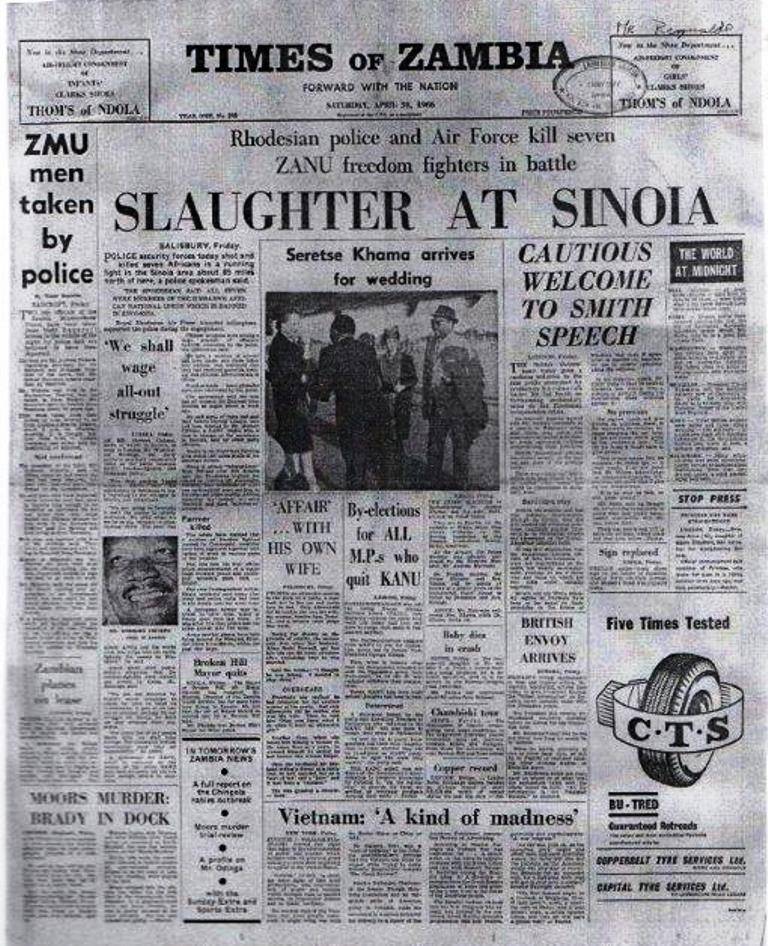 Trevor Grundy is a British journalist who lived and worked in Central, Eastern and Southern Africa from 1966-1996).

Zimbabwe: Forward to the past

The Daily Insider: Why we’re pro-vax at BizNews – the rational choice