The slow pull of the bulk of the SSA population out of absolute poverty is not the only challenge the sub-continent faces. This brief will consider the rise in population densities in SSA countries, and its possible consequences.

SSA contains 42 countries, excluding island states. Further excluding countries with populations of less than two million in 2015, 18 are projected to have population densities of more than 100 people per square kilometer in 2050, using the UN medium fertility projection[3]. Four countries are projected to have higher densities than Belgium, India and the Netherlands had in 2015, two more to have densities higher than Pakistan, Germany and the United Kingdom, and seven to have densities higher than France, Denmark, Thailand and Indonesia. The 17 countries accounted from 62.7% of the SSA population in 2015, dropping to 61.9% in 2050.

These are astonishing projections, given the low level of urbanization in SSA compared with south-east Asia, northern Europe and western Europe, and the question arises: how will the sub-continent respond?

Malthus famously thought that population growth had a tendency to outstrip economic growth, and when it did, he suggested later marriage to reduce fertility. Modern contraception has been added as an instrument. The non-coercive way to reduce fertility is to offer contraception to all women who desire it. The Demographic and Health Survey in Nigeria in 2013 found that 49% of married women who wanted contraception did not have access to it. The corresponding estimate or Kenya in 2014 was 25%.

Were fertility to drop from the United Nations medium projection to its low projection, population sizes in 2050 would drop between 9% and 13% across the 18 countries. Even so, the four most densely populated countries – Nigeria, Uganda, Rwanda and Burundi – would continue to have densities above 400 per square kilometre. The problem is that even if fertility were to drop to a level which would stabilize population size in the long run, it would result in growing populations in the short and medium run, because of a bulge in young women in the age distribution. Much of the population increase in already baked in.

Urbanization takes pressure off agricultural land and partly accommodates rising population densities through more compact settlement. The cost is the pressure it puts on urban amenities – the SSA urban population will be more than three times larger in 2050 than it was in 2015. And it does not completely remove the pressure on rural areas, whose population is expected to rise by over 50%[4], at a time when climate change is expected to hit Africa hard. Moreover, most urban dwellers will have to earn a living through production within their households, with limited opportunities for productivity growth. Of the total population in SSA, 77% of the employed in low income countries and 72% in lower middle income countries were employed in this way. Rapid economic growth is likely to be concentrated within enclaves.

From 1850 to 1914, over forty million persons left Europe, mostly going to North and South America. Since Europe's mean population during this period was less than 400 million, this implies a cumulative loss equivalent to more than one-tenth of the average population[5]. If the late 19th century emigration rate were applied to our 18 countries, over 50 million people would emigrate from them over 35 years, and the population growth rate would drop marginally from 2.29% to 2.12%.

Consider West Africa. It has two features. Ten of the 18 countries are located there[7], and the Nigerian population dwarfs that in any other country in the region, projected at 51% of the total in 2050. Movement west from Nigeria would encounter other densely populated states, movement to the north would be constrained by the desert. Movement to the east would put pressure on a belt of countries: Equatorial Guinea, Gabon and the Congo Republic to Chad and the Central African Republic. Or consider East Africa, with seven densely populated countries. Movement to the north would entail pressure on South Sudan, Sudan, Eritrea, Djibouti and Somalia, movement to the east would affect the Democratic Republic of the Congo, and migration to the south would put pressure on Mozambique and Zambia, and probably on Zimbabwe and South Africa as well. Of the 12 neighbouring states under pressure, four have an average score of at least 9 out of 10[8] on the twelve indicators of state fragility collected by the Fund for Peace, two have average scores of between 8 and 9, and five have scores between 7 and 8. All would have great difficulty in resisting large scale movement.

A degree of informal and undetected movement between densely populated states and their neighbours is facilitated by high degrees of ethnic fractionalisation (the probability that two people picked at random will be from different ethnic groups) within densely populated countries and their neighbours. As estimated by Alesina[9], 12 of the 18 densely populated countries have indices greater than 0.7, and 11 of 12 neighbours fall into the same range. High degrees of within country fractionalisation make it likely that the same ethnic group can be found on both sides of a border, enabling migrants to blend in easily with communities in host countries. 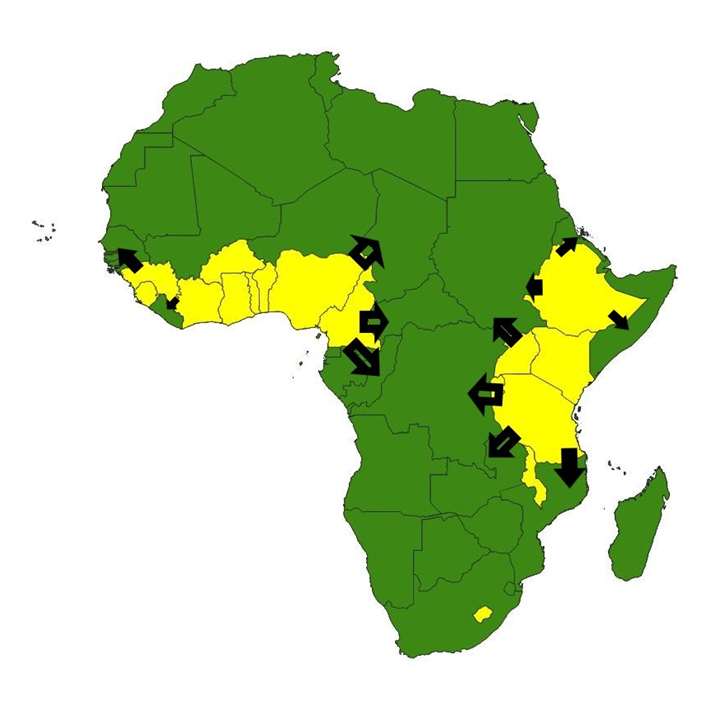 Malthusian positive checks operate by increasing mortality, and include war, disease and famine. If they emerge, famine is the most likely, accompanied by chronic instability within stressed countries and across their borders.

Sub-Saharan Africa will have by far the fastest population growth of any of the world regions between 2015 and 2050. Under the UN medium fertility projection, its population will grow by 124% over the period, compared with 54% in North Africa, the second most rapidly growing region. Demographic pressure will be amplified by fragile states and climate change. It will be a miracle if the sub-continent avoids major dislocation in what remains of the first half of the 21st century.

Charles Simkins is Head of Research at the Helen Suzman Foundation.

[8]The higher the score, the greater the fragility.

On the Medical Schemes Amendment and NHI Bills

Land Reform: The developmental state on the job

In charts: The debt and deficit woes that keep Tito Mboweni up at night