In late 2007, in response to intensifying cable theft, Eskom ran a series of adverts calling on the public to report such criminals to the authorities.

The mainstay of that campaign was an ominous TV advert, which you can watch here (see here). The voiceover, deep and menacing, says, “There are many izinyoka among us these days [A cable thief turns to the camera. His eyes morph into evil-looking, yellow snake eyes], izinyoka that cause havoc for all of us by stealing electrical cables and disrupting the power supply”. After much more portentous solemnity, it concludes, “Help Eskom put these izinyoka were they deserve to be – in a hole.”

In late January 2008, in a story which passed without much recognition, it was reported in the Natal Witness that a man and two accomplices caught stealing cables by members of a local community in Pietermaritzburg. They were severely beaten and left for dead, the one with a snake tied round his neck.

The thing about South Africa, among many things, is that it is not a normal society. A dire economy, rampant poverty and desperation are augmented by much anger, fear and paranoia. Add to that mix so much prejudice - racial, ethnic and otherwise - and you have an environment in which people are often likely to turn violently on “the other” long before they turn to the law.

One of the most evil manifestations of this inclination is xenophobia, a problem that has plagued South Africa for well over a decade now. It is a constant threat. When simmering below the surface it results in thuggery and abuse, when it boils over, which it does sporadically, murder and the most vicious assaults on immigrants. Just to keep the temperature manageable is a full-time political occupation.

It is a classic symptom of a society under stress, and the product of a people for whom group-think is generally second nature. The scapegoating of immigrants, for problems that have everything to do with a dire economic policy of a democratically elected government, is the response of far too many South Africans. And it is futile too. For even if you rid the country of all immigrants (legal and otherwise, a tiny percentage of the population), the problem would still remain. In fact, if anything, immigrants tend to contribute to the economy. So, it would be self-destructive too.

On Thursday, at rally during which the DA would call for the army to be deployed in the Western Cape (a mad demand, worthy of its own critique), the party revealed a new slogan, emblazoned on t-shirts and posters alike: “All South Africans first”. It provokes the obvious question: who is second, and what does that mean for them? 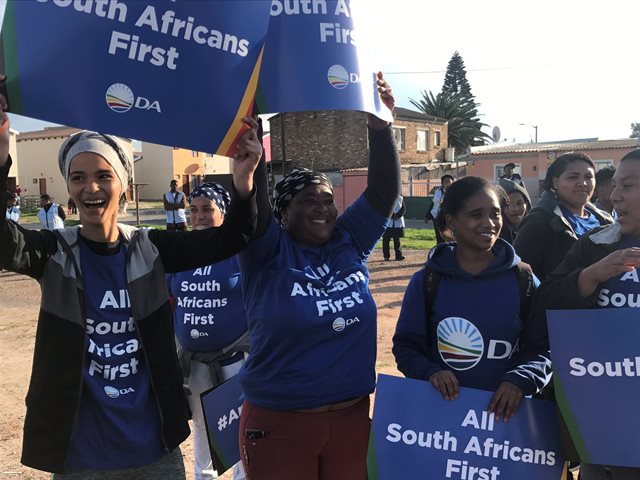 The answer, of course, is immigrants, and the poster, just like the baying mob in South Africa, is the response of a party that seeks to scapegoat serious economic criticism for a relatively minor problem, because it plays well with the masses. It is a disgraceful sentiment. But, more importantly, it is a profoundly dangerous one. A nationalistic idea, fashioned in the language of those right-wing parties that have risen to prominence in Europe and the United States, that will be interpreted prejudicially, not rationally.

You can like that or lump it, it is the brutal truth about the South African environment at present. It is a tinderbox and these sorts of idea, whatever the DA’s defence, will be heard to mean: “We must stand together against the other”. And we all know who “the other” is.

The DA’s defence will be, of course, that all this has nothing to do with its intentions. Its intention is patriotism, and so on and so forth. But that is a pretence. It will never admit to the message that lurks between the lines. But that is the message that matters, and the DA knows it. The DA is playing with wildfire. It needs to bury those posters and it needs to do it now. Because, if it has any intention of putting them front and centre of a year-long election campaign, backed by hundreds of millions of Rands, it might as well just pour petrol on the catalysts that are the many and various prejudices and fears which define the political landscape.

The slogan is unconscionable. It cannot be tolerated.

It is worth saying something about the ideological thinking that underpins it too. The DA is a liberal party, not a nationalistic one. But this idea, of pitting nations and groups against each other, is fundamentally nationalistic in nature. It is deeply disturbing that it now seems to have the beginnings of a grip on the party’s throat. It is not the kind of embrace you easily remove, once it is tight enough. It chokes the oxygen to the brain and, before you know it, it infects all thinking.

That is nationalistic there is no doubt. Former DA leader Tony Leon, in response to the slogan, tweeted, “JBM Hertzog ‘South Africa First’ 1912”. It was a reference to Barry Hertzog, National Party Prime Minister from 1924 to 1939 and who ran for election under the slogan “South Africa first”, an idea that would become the centrepiece of Afrikaner nationalism, as the NP sought to eradicate British influence.

But it has its echoes elsewhere. "From this day forward, a new vision will govern... it's going to be only America first, America first", Donald Trump told supporters at his inauguration. The far right political party “Britain First” has been banned from social media in the UK, for the hate it produces. The party’s two leaders, Paul Golding and Jayda Fransen, were jailed in March for a series of hate crimes against Muslims (see here).

There are many other examples besides. This is not the sort of company the DA wants to be keeping. Nor the sort of potentially poisonous ideology it wants to be espousing. By all means, be patriotic and proudly so. But patriotism is not nationalism. The former is positive, the latter is negative – and the frame of reference it relies upon to distinguish and legitimate itself is “the other”, and contempt for them, couched in fear-mongering and fuelled by intolerance.

One final point, when you start to embrace these sorts of nationalistic ideas, in a nationalistic context, you will lose. Once immigrants have been dealt with, who do you think will come next? Who is a “real” South African anyway? That is certainly a debate the likes of the EFF – the real deal when it comes to racial populism – wants to have. White South Africans are, after all, just “visitors” here, Julius Malema says. And the party is now turning its attention to Indians too. Endorse this slogan and you are sanctioning a conversation you will quickly lose all control of. The real nationalists will take it over. Scapegoating always works that way. The actual scapegoat is just a surrogate for fear and prejudice. When it is dealt with, a new scapegoat is quickly found to take its place.

It has now been said a thousand times, but it is worth saying again: the DA’s over-reliance on polling, at the expense of principle, risks rendering the party unrecognisable as a liberal institution over time. There can be no doubt this slogan polls well, for all the reasons set out above. And, under pressure electorally, it is perhaps understandable why the DA is so keen for any message that resonates powerfully. You can be sure this one does.

But that does not make it right. Nor does it legitimate the very real danger inherent to it. Just as Eskom no doubt thought it was delivering into the South African environment a well-meaning sentiment, these sorts of ideas just don’t play out that way on the ground. When it asked people to help them put criminals in hole, the people delivered. And the result was a set of bodies, beaten to a pulp, in a hole. And, guess what, cable theft remains a problem.

Gareth van Onselen is the Head of Politics and Governance for the South African Institute of Race Relations, a think tank that promotes political and economic freedom. If you agree with what you have just read then click here or SMS your name to 32823.

How the DA learnt to forget and love the ANC

Zuma: How the commentariat got it utterly wrong

Flash Briefing: Police close in on minister for spying on SA captains of industry; Road Accident Fund in crisis