{{testingGreg}}=testingGreg
The economy: Adapt or die (I) – The short term - OPINION | Politicsweb

The economy: Adapt or die (I) – The short term

The economy: Adapt or die (I) – The short term

It was inevitable that redistribution would be a preoccupation in the first quarter century after apartheid. But the goose laying eggs for redistribution is now gasping for breath. It does not need a recitation of needs, or the setting of targets, or lyric poetry. What it does need is intensive care under the supervision of competent professionals, followed by a period of recuperation. A series of three briefs discuss treatment of the economy in the short, medium and long terms. The central objective, to which all others should be subordinated, is a substantial increase in the economic growth rate or, more precisely, the potential growth rate, the rate at which the economy can grow sustainably, i.e. the speed limit on growth. Estimates place it in a narrow range around 1.5% currently, which implies stagnation in real gross domestic product per capita.

Economists conventionally avoid assigning definite time periods to the three terms, preferring to think in terms of the adjustment processes appropriate to each. But here the short term will be regarded as lasting from now up to the presentation of the budget in 2020, the medium term as the following two years, and the long term stretches beyond the 2022 budget. Budgets punctuate the economy by crystallizing government priorities from a haze of promises, revealing ‘the skeleton of the state stripped of all misleading ideologies’ 2 .

It was a relief to hear a reaffirmation of the constitutional mandate and independence of the Reserve Bank in the 20 June 2019 State of the Nation address. That leaves the Monetary Policy Committee (MPC) free to assess economic conditions in each successive meeting at two monthly intervals, and to decide on the repo rate in light of the goal set by the Minister of Finance. It may be that the MPC encounters choppy waters in the short term, arising from developments in the global economy and possible loss of our last sovereign investment grade rating. The last thing needed now, or at any time, is an ill-conceived monetary policy adventure. A steady hand at the tiller is required, with clear communication. The Reserve Bank works hard at this, publishing documentation after each MPC meeting and two detailed Monetary Policy Reviews per year, and convening Monetary Policy Forums in major centres twice a year.

Fiscal policy is less stable, for two main reasons. First, it has become clear that considerable damage was done to the South African Revenue Service in the Moyane years. The leadership is an improvement, but the re-stabilization of SARS, affecting revenue collection capacity, will take time. Second, the lack of financial sustainability at several state-owned enterprises, not just ESKOM, caused by incompetence, corruption and an inability, indeed unwillingness, to keep remuneration of employees within reasonable limits, entails substantial pressure on the fiscal situation. As a consequence, domestic and foreign investors and observers are reassessing government debt and the budget deficit as considerably more precarious than before. The only thing to do is to grasp the nettle.

In this respect, the SONA announcement of a Special Appropriation Bill to increase the support to ESKOM in the next few years is appropriate, but it does not go far enough. It does not specify how this appropriation is to be financed, and it does not make allowance for emergency assistance to other SOEs. The new appropriation has to be passed by October to prevent ESKOM running out of cash, and its effects can therefore be included in the October Medium Term Budget Statement. The appropriation’s impact on taxpayers and the population as a whole should be carefully analyzed by the National Treasury and published in clear, unvarnished terms, not sugar coated, as GEAR was. Corruption costs, and a clear indication of the burden it imposes will increase popular pressure to fight corruption.

The recent history of Brazil indicates the economic and political costs of not getting the fiscal position under control. The two graphs below tell the story. The first graph shows that from 2012, the net borrowing of the government increased, peaking at above 10% of GDP in 2015. Inflation accelerated as a result, and monetary policy tightened in response to a deteriorating situation, with the SELIC rate (the Brazilian counterpart of the South African repo rate) peaking at 14.25%. The second graph shows that the impact on growth was dramatic, with the economy contracting by more than 3% in both 2015 and 2016. Accompanying these developments was a downgrade in sovereign ratings 3 . 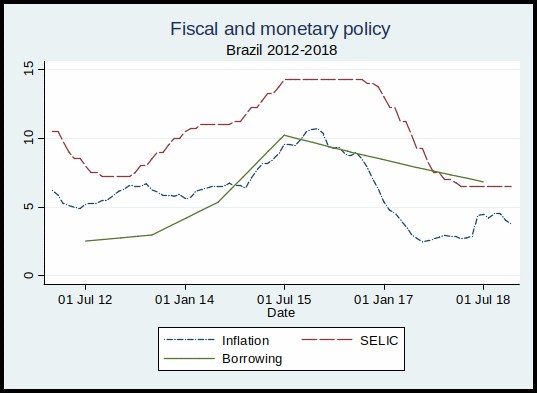 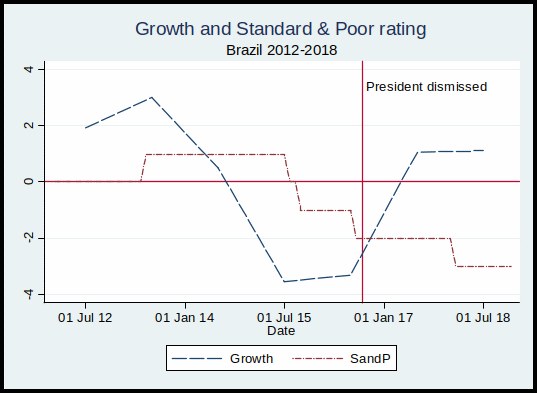 A performance like that gets people on to the streets. It was no accident that the impeachment of President Dilma Rousseff succeeded at the beginning of September 2016. In South Africa, there were more serious delivery protests in 2018 than any other year since 2005 4 , so a similar loss of fiscal control should be greatly feared. In particular, any increases in transfers to SOEs should be paid for by a reduction of other government expenditure or an increase in taxation.

The impact of the loss of the Moody’s investment grade rating will depend on the extent to which it has been anticipated and priced into the markets. The April 2019 Monetary Policy Review estimated that the credit default swap spread for South Africa (the cost of insuring against a sovereign default), was about 180 basis points, higher than that of some countries with lower credit ratings, such as Brazil. This suggests markets are pricing in a further rating downgrade for South Africa. But there is always an economic shock when a binary outcome (investment or sub-investment grade) is realised.

A surveillance note prepared by International Monetary Fund’s staff for the G-20 Finance Ministers and Central Bank Governors’ Meeting on 8-9 June 2019 summarizes current IMF thinking about global developments. It finds that very recent data suggest that the international growth slowdown may have bottomed out, with growth projected to increase slightly in 2020. Nonetheless, monetary policy needs to stay accommodative until inflation rises to target rates. Fiscal policy in individual countries should vary with fiscal space. Emerging markets should prepare for potential volatility in international capital flows. This makes for a difficult situation in South Africa. Fiscal space is severely restricted and the risk premium is already high. Lower global growth would prompt decisive monetary easing internationally, creating more space for easing here, but it would negatively affect the demand for South African exports. A floating exchange rate absorbs some of the shock, but a significant depreciation of the rand would bring with it at least a first round of inflation.

With a sensible approach to monetary policy maintained, at least for the time being, the focus needs to shift quickly to fiscal policy. There is a lot to achieve in the next three months, including an analysis of minimum required transfers from the government to all state owned enterprises in crisis, working out how to finance these transfers, and the tabling and passing of the necessary legislation. By the time of the October Medium Budgetary Policy Statement, there must be a clear view of the fiscal and wider economic implications of these transfers over the medium term. Decisiveness, credibility and transparency are critical and must be fully achieved by the time the 2020 budget is presented. Dilatory kicking of the can down the road, accompanied by unbelievable projections will not do. We have had far too much of that already.

1 P W Botha used this phrase during a speech in Parliament in October 1979 and Pieter-Dirk Uys immortalized it.

2 The phrase was used by Joseph Schumpeter, Austrian finance minister in 1919

On the South African right

On the South African Left