Charles Simkins writes absorption into employment is slow, and some people never graduate into stable employment

The International Labour Organisation has put considerable effort in recent years into empirical studies of the school to work transition. This transition is defined as the passage of a young person from the end of schooling to the first stable or satisfactory job.

Information is collected by a School to Work Transition Survey (SWTS), not yet undertaken in South Africa. In particular, we lack information about the stability and satisfactoriness of jobs. Nonetheless, we do have sufficient statistical information to illuminate the transition, including the following:

- A special QLFS Panel data set with a common set of respondents, permitting an analysis of transitions between states in the third and fourth quarters of 2013

Not every source yields information on every aspect of the transition. The sources used are referenced at the bottom of the graphs which follow.

A word of caution is necessary for their interpretation.  The sample sizes for the GHS, QLFS and TUS are small, and this leads to jagged curves when data by age are presented. These irregularities are a statistical artefact and they should be looked through in assessing the shape of the curve as a whole[ii]. 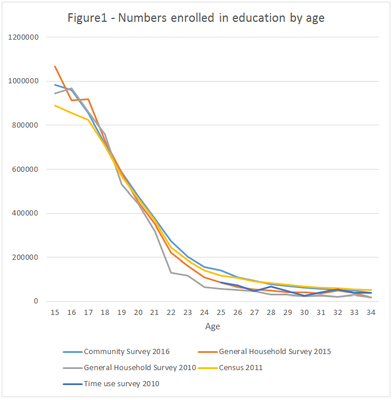 The estimates are broadly coherent, with the Census underestimating enrolments at the youngest ages and the GHS 2010 underestimating them for people in their early 20s. There is no systematic variation of the estimates across data sources by date. Enrolments remain above 250 000 up to age 21 and above 100 000 up to age 23. From age 25 on, the enrolments are almost all in colleges and universities.

Figure 2 displays employment by age. The discrepancy across sources is greater than in Figure 1, particularly in the second half of the age range. Estimates of total youth employment vary as follows: 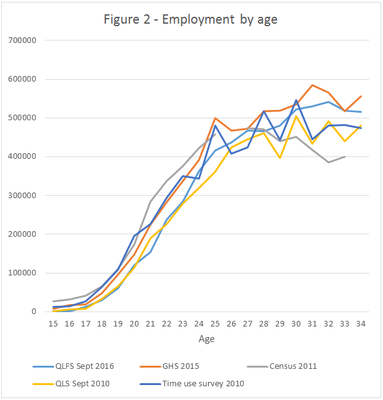 Bear in mind that Statistics South Africa defines people as employed if they work as little as an hour per week. Information about the distribution of time spent working will be considered in the next brief.

It is possible to be enrolled in an educational institution and work at the same time. The Census shows that just over 10% of employed people were distributed over education institution types as follows:

The people in between

It has become standard to refer to the people not in education or employment as NEETs (Not in Employment, Education and Training). They come in two categories: NEETs who desire to work and NEETs who don’t. The first category contains the officially unemployed (those who both desire work and are seeking) and discouraged workers (those who desire work, but are not actively seeking it). The second category contains the economically inactive (people who do not desire work).

Figure 3 displays the distribution of NEETs Category One by age. 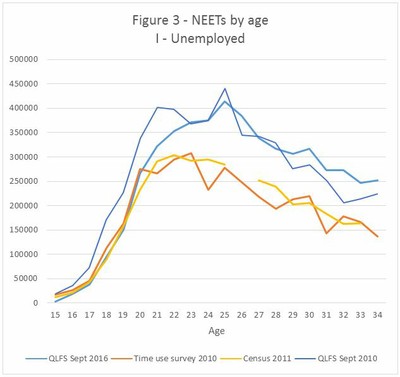 1. The two QLFS estimates are markedly higher than those from the Time Use Survey and Census. The QLFS provides more information to enable accurate identification of NEETs than the other sources, and should be regarded as more reliable. QLFS 2010 put the number of NEETs Category 1 at 5.3 million, compared with 5.1 million in 2016.

2. One would expect the NEET curve to rise as people complete their education and then fall as they are absorbed into employment. But the South African curve is distinctive in two respects. It takes a long time for people to be absorbed into employment and, even at age 34, the process is incomplete. The fact that the number of NEETs is not far short of the number of employed is the number one problem facing South African youth.

Finally, NEETs Category Two are shown in Figure 4, drawn to the same vertical scale as Figure 3. 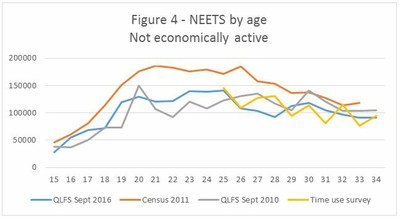 Both QLFS 2010 and QLFS 2016 put the number of NEETs Category 2 at just over two million, with a less reliable estimate from the Census of 2.8 million. Put another way, little more than 10% of young people are economically inactive, with 90% in education, a job or wanting work.

The hazardous nature of the transition from education to work is clear. Absorption into employment is very slow, and some young people will never graduate into stable employment. It is worth noting that the number of Category 1 NEETs is five times the number of students enrolled in universities, and their needs are greater.

The International Labour Organisation considers the transition to work complete when people enter their first stable or satisfactory job.  Stability can be investigated by considering the movement between education and employment states during a specified period of time.

The Quarterly Labour Force Survey divides its sample of respondents into four representative groups of equal size.  In each quarter, one of the groups is dropped, and another takes its place.  This design means that any one of the groups can be tracked over four quarters, yielding information on mobility between states.  For a number of reasons, the matching of persons with the same identification statistics is not perfect, and analysts have to develop ways of removing false matches, since Statistics South Africa does not do it for them, with one exception.  That exception is a matched set of observations from the third and fourth quarter of 2013.  An International Monetary Fund study[i] has found that the matching in this data set was good and that sample attrition between the third and fourth quarters imparted no significant bias.

In studying transitions, one has to devise a set of mutually exclusive and collectively exhaustive states.  Five are defined here:

1. Enrolled in education and not working

2. Not enrolled in education and economically active

3. Not enrolled in education and unemployed (both the officially unemployed and discouraged workers)

4. Employed for less than 35 hours per week

The principal features of the mobility tables can be summarized as follows:

1. The persistence of enrolment in education among the youngest age group (15-19) for both men and women.   The people leaving that state were most likely to become economically inactive and unemployed.  There is a churn between education enrolment and other states among this age group.

Bearing in mind that the probabilities refer to a three month period, the general picture is one of fluidity which only gradually decreases with age. This accords with findings from a study of transition rates ten years earlier[ii].

Fluidity is associated with the nature of the employment contracts.  Just 25% of the youngest age group reported having permanent jobs according to the Labour Dynamics Survey of 2015, rising to 40%, 51% and 59% in older age groups.  32% in the 15-19 age group had a limited duration contract, dropping to 16% in the 30-34 age group.  43% in the 15-19 age group had contracts of unspecified duration, dropping to 25% among people age 30-34.  Of the employees with contracts of unspecified duration, 64% had only verbal agreements with their employers.

The IMF study found that previous experience has a much stronger effect on the job finding rate than education, and that the effect was particularly marked among the young.  Consistent with international experience, it found that long term unemployment reduced future employability, while higher education reduced the job exit rate. A job in the informal sector increased the probability of finding a formal sector job.

There is a strong desire for more work among employed people working short weeks.  The Labour Dynamics Survey reports that 57% of those working for up to 15 hours per week wanted more work.  The corresponding percentages for those working 16 -30 hours and 31 – 40 hours were 48% and 12%.

There is very little information on job satisfaction among any but the most circumscribed groups.  An exception is data from the Human Sciences Research Council’s South African Social Attitudes Survey of 2005, which found the following from a representative sample:

*The information is not disaggregated by age.

The findings in this brief are consistent with the picture which emerged in Youth Brief 5.  High levels of unemployment are associated with high mobility between states, low levels of contractual stability (which, however, increase with age) and a consequent high valuation of job security.   The most potent cause of dissatisfaction with work is low income, followed by lack of opportunity for advancement.  Nonetheless, a clear majority of respondents in the 2005 SASAS found their job interesting and agreed that it helped other people and that it was useful to society.

The International Labour Organization envisages that the education to work transition should lead to stable and satisfactory employment.  This is far from being the case for many of South Africa’s young people.

The size of the sample means that the precision of the off-diagonal estimates is limited.  Nonetheless, they are sufficient to establish the conclusions drawn in the main text.

[ii] All sources contain a degree of sampling error, even the census which is adjusted for undercount using re-enumeration in a sample of enumeration areas

[iii] These include schools, TVET (technical and vocational education colleges), other colleges (both public and private), universities, community education and training colleges (including Adult Basic Education), and home schooling