As a so-called special writer for (the then) Independent group, I covered every day of Jacob Zuma’s rape trial from 6 December 2005 to 8 May 2006; and at the time said very loudly, to anyone who would listen to me, and to the many who wouldn’t, that I had experienced the emerging story of Khwezi (Fezekile Ntsukela Kuzwayo, who laid the charges against Zuma) – what had happened to her as a young person in exile and in general, the way she had been broken apart – as one of the most heart-breaking stories I'd ever encountered. (Parts of my “role” as a reporter in the overall "Khwezi story" are accurately rendered at locations 1066-7 of the e-book version of this book.)

Especially significant – I thought, as a political journalist/commentator – was that her story had opened, a little, the mostly-closed can of worms of ANC life in exile, demonstrating certain sordid and harsh realities about which no one wanted to tell, and which would rapidly be whitewashed (and to a large extent have “disappeared” – though see here “The other ANC of OR Tambo by Sara Gon). “Here,” I opined to myself and probably to younger and more energetic colleagues, “is the book that needs to be written about the ANC – about South Africa in fact.”

Serendipitously, I also happened to be at the 6 August 2016 Khwezi placard protest, staged by four women at the Pretoria IEC media conference when Zuma spoke. Most interesting to me at the time was that most of the folk seated around me – who, besides my wife, were black, not younger than 30, and clearly “movers and shakers” – were more bewildered than “upset”: not one of the roughly 14 people, male and female, in my immediate vicinity, knew who Khwezi was – not initially, anyway. This was a mere 10 years after the trial. Then, Kuzwayo died in October 2016.

In mid-September the impending publication of Tlhabi’s book was announced, with attendant publicity and press releases, and my heart sank. Oh dear, I said to myself, punkt at the right political moment (with Zuma apparently on the ropes), this is going to be yet another replay of the rape trial, with Zuma being found guilty, and the usual suspects waxing indignant, but with nothing being said about just how damaged a person Khwezi was or about the appalling environment that contributed massively to her damage (i.e. ANC-exile-life-in-Africa).

I apologise to Tlhabi. She has fried much bigger fish than Zuma alone; she is fully aware of Fezekile Kuzwayo’s frailties; and she also clearly understands the “larger picture” – in the foreground of which Kuzwayo was but a small player. 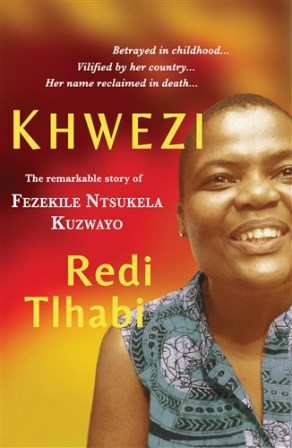 This being the case, this book must have been very difficult to write: tying your thesis, as it were, to an “evasive” and troubled protagonist cannot be easy. Nonetheless, Tlhabi pretty much gets to where she is headed and, moreover, has written a compassionate and moving epilogue to Kuzwayo’s life – and in addition has highlighted the horrors facing South African women such as Kuzwayo and thousands of others besides.

Tlhabi’s over-arching thesis can, I think, be said to consist of three major points. (Doubtless there are more aspects; these are the ones on which I want to focus.) First, that arrant, destructive power is the language of relationships in South Africa, especially the relationships between men and women (and adults and children).

Fezekile Kuzwayo represented something much larger than the life of a young woman. She was not just Zuma’s rape accuser …. We should have learnt to interrogate the language of power. We should have walked away from her story with an understanding of the complexities of power relations and how they can destroy lives (3383-87).

Second, flowing from this, Tlhabi reminds us that “justice” and “law” are not always consonant and that legal instruments and courts often operate as platforms of patriarchy. Did you know, for example, that the Truth and Reconciliation Commission (TRC) did not have a category for gender violence against women?

The unique violence – often sexual – that women faced was addressed under ‘serious ill-treatment’; according to the Khulumani Support Group … this category also included solitary confinement (510-516).

Third, above all, Tlhabi shows us that Kuzwayo was initially “betrayed” by the very people in whose care she was while in exile:

The uncles [the older men, the “father figures”], who were principled enough to fight a noble fight against an oppressive, racist system, lacked the morality to appreciate the gravity of their violation of a little girl. To fight an evil system, surely one must have a sense of justice? Not when it comes to women and children’s bodies. The war against apartheid, fought across women’s bodies on different fronts. Fezekile should have been safe in this small world called exile, populated, ostensibly, by those who had a common cause and were one another’s family. Fezekile’s story is their story (473-477).

The ruling party has, largely, been in denial about this, choosing instead a narrative that speaks only of the heroism and sacrifices of so many gallant comrades – a narrative that is true, but incomplete. The war against apartheid was fought on and across women’s and children’s bodies. Many paid the price (539-541).

Do I have any “difficulties” with this book? Yes, a few. For one thing, the story of “life” in exile and the complicity of some ANC leaders in gross abuse of women (and some children, it seems) is not fully researched; it largely depends on the court record of the rape trial and conversations with people to whom Tlhabi was led via Kuzwayo’s story. But fair enough, I suppose; the book is about Kuzwayo.

Second, Tlhabi’s indignation does sometimes result in rhetoric that’s a bit iffy. “Khwezi is politics – a symbol of the arduous fight against political and patriarchal power, and against Zuma, its torchbearer” (99). “Its” torchbearer? Patriarchal power? Zuma? No doubt Zuma is trundling along in the crowd, along with thousands, if not millions, of other patriarchs, and he does have more than one wife, and so on. But the torchbearer? Next, we’ll be accusing him of being responsible for drought and dandruff. Besides, isn't there a difference between "patriarchy" and plain, unvarnished predatory masculinity?

Perhaps more problematic, in my view, is this. If one has a philosophy, or a strong point-of-view, or a stance, it can sometimes result in a rationalising process that really doesn’t fly; and often Tlhabi seems to get caught between demonstrating the “humanness”, and therefore intrinsic beauty and lovability of Khwezi, and her own (Tlhabi’s) “political” views on men, patriarchy and power. There is sometimes a tendency to blame things that happened to Kuzwayo (and others) on, for example, “male entitlement” tout court. Isn’t real life, the life of human beings, perhaps more complex? Doesn't it tend to slip out of the ideological/political boxes into which we try to place it? Like herding cats.

But as I said: a compassionate and moving epilogue to Kuzwayo’s life, a welcome spotlighting of the horrors facing South African women such as Kuzwayo, and the beginnings of some truth-telling about ANC life in exile.

Bell Pottinger did a bad job, you say?