The road to poverty

“We South Africans are incredibly naïve. We have a poor understanding of power, a tendency to trust individual leaders and we worship big institutions such as banks, state-owned enterprises and large corporations.

This is why we widely assume that since Cyril Ramaphosa became president, State Capture is over. We assume State Capture was about corruption — a cabal of bad guys who stole the money. But now that we have the Zondo Commission, investment and job summits and a mudslide of reports about all the things the bad guys did during the Zuma era, we can relax and get on with our lives and businesses. It’s not going to pan out like this.”-Prof Mark Swilling, Distinguished Professor of Sustainable Development in the School of Public Leadership, Stellenbosch University.

South Africa’s massive investment industry must be secretly very happy with the fact that the decimation of journalism in South Africa, and financial journalism in particular, has led to very poor and superficial reporting on local investment trends. Added to that, is the fact that many media outlets are furthermore hesitant to expose the poor performance of locally-listed investments for fear of upsetting some of the very few industries which still has some money to spend on advertising.

The few remaining financial journalists are also under so much pressure to produce never-ending copy for a voracious master—their websites—that there is simply not enough time to do really in-depth analytical research on investment trends and returns, both real and relative. They are therefore so thankful for the well-crafted press releases that the big investment companies churns out, as it fills an insatiable hole as eternally-connected readers demand more and more articles, often without paying for them. An article that has been on a website for a couple of hours is deemed to be “old news”, with readers often quick to write and demand better and faster-flowing news..

As someone who has spent a lifetime in financial journalism, I can therefore spot a reworded press release almost immediately. Original and well-researched investigative journalism is therefore becoming very scarce.

Over the last couple of months I have noticed a sharp increase in the number of articles on a variety of websites and media outlets, emanating from the large asset managers, and most of them are guilty of what is known as “sunshine journalism”.  In short: everything is fine (with your investments), the poor performance of the JSE over the past several years is temporary, and investors who panic now will miss the benefits of the upturn, tra la la….

One large fund management company, Old Mutual, recently went out on a national roadshow confidently forecasting that the JSE would outperform the “average of world equity markets over the next five years”.

Wow! This is quite rich coming from a company whose investors by and large have not seen a real return, i.e. in excess of inflation, over the past 1, 3 and 5 years.

It is clear to me that the large investment companies are seeing money flowing out of their fee-rich equity portfolios into cash or offshore, where it possibly will be invested with global companies who offers lower fees. The results from JSE-listed Coronation shows just how much pressure asset managers currently are under.

The harsh reality is that is the JSE has been one of the poorest performing major markets now for over 10 years. It used to be over 1, 3 and 5 years but according to the latest Morningstar stats which hit my inbox over the weekend, SA has been under-performing global markets now over every year from 1 to 10 years.

See here the wealth destruction of your money and your retirement. 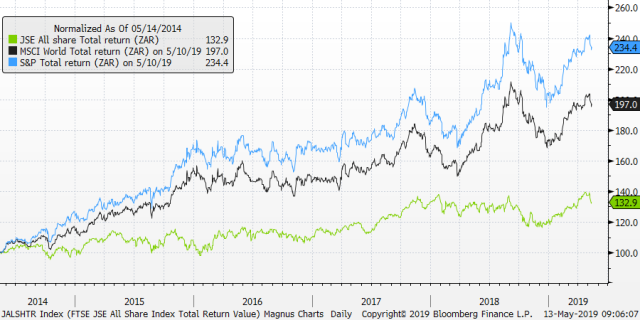 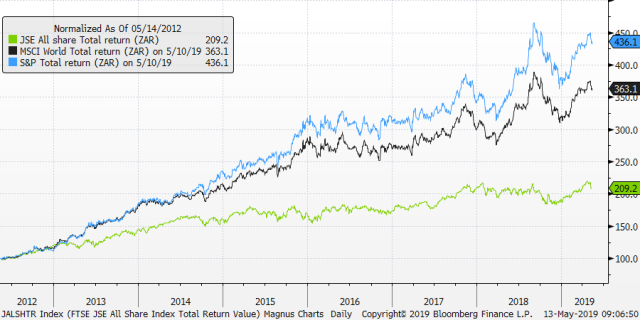 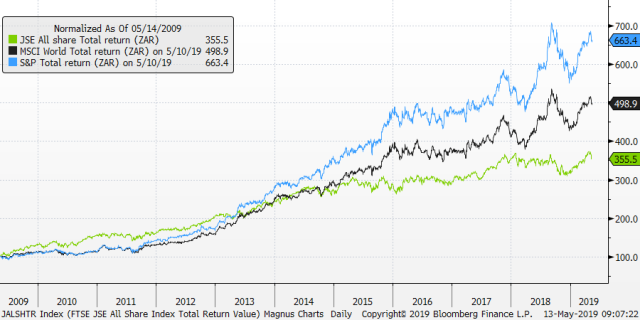 The impact on your retirement fund

Furthermore—and I battle to find any articles about this with the exception of my own—pension funds, which are controlled by Regulation 28 of the Pensions Act—have not beaten inflation now over 1,3 and 5 years. Let me say that again: each and every one with money in a pension/provident/retirement annuity/preservation fund  has not beaten inflation over 5 years now. The primary reason is that retirement funds are only currently allowed to invest 30% of their capital offshore.  For many years this allowance was much lower.

Such news would be front pages of media outlets in most Western countries. Here in SA: nada, nothing. Try and find an article of Reg 28 and what it is doing to your future wealth. Or an article about how poorly the JSE is doing relative to the rest of the world.

I listened the other day to a podcast from a local investment commentator ---who  pops up everywhere-- that he doesn’t waste much time with offshore markets as the JSE offers enough offshore diversification. It all made sense when I realised that his blog/podcast is sponsored by the JSE.

There is virtually no reporting on the relative performance of the JSE versus developed markets or even its peers, the emerging markets. Here too, the JSE has been underperforming since December 2015—and we all know what happened in that month, don’t we? Strip out Naspers and the underperformance since 2012 is even more concerning.

Anyone recommending offshore investments, such as myself, is accused of being “unpatriotic, negative, cynical or whatever” and that we should all” bugger of to Australia or Mauritius”, as if that would solve the problem.

Ask yourself one question, dear reader. Have you ever seen a fund manager advise that the market is expensive and that investors should consider moving money to cash or other better-performing markets or funds. Fund manager are eternally bullish, that we all know, but investors must learn to become more circumspect when they read such bullish forecasts.

It’s also worth noting that fund managers are not legally allowed to give investment advice. This is the domain of registered financial advisors. But these investment seminars are so carefully choreographed to steer investors (and investment advisors) into a certain outcome, that by all accounts it comes across as investment advice.

So are the investment giants correct when they say that the under-performance over the past decade is temporary? And that the upturn is near? Or should one consider, as I do, that the SA economy has structurally changed –and therefore, unless there is a dramatic sea-change in the economic policies by the governing party, that this under-performance is likely to continue for much longer--perhaps even permanently, and that a serious re-evaluation of current investments strategies is called for if one hopes to rescue one’s retirement capital from further declines.

As it is, the retirement outlook for a generation of South Africans has been demolished, right in front of the eyes of our sleepy financial media.

Media coverage on this? Don’t upset the advertisers, is the warning from the editors.

The large fund companies hate cash. The fees on these instruments are very low and the real big bucks and the star-careers are built on equity funds, not cash funds.

But there comes a time when the truth needs to be spoken about the reality of the SA’s economic near-term future.

It’s true that the JSE was one of the top investment markets for more than a century to about 2011, according to a study done by Credit Suisse. This performance is often used by fund managers and advisors to justify staying invested in the JSE.

The sad truth is that the JSE has now a shadow of its former self. The gold mining industry has come and gone. Anglo American’s announcement last week that it is selling its last gold mine in SA, is the final nail in the coffin for the sunset industry. Neal Froneman from Sibanye has stated publicly that he won’t “invest another cent in South Africa”, an exasperation brought upon by the uncertain mining policies, militant labour unions and escalating costs of electricity.

Foreigners have been fleeing from the JSE for over 4 years now—well over R500 billion has been withdrawn from the equity and capital markets over this time.

New listings have dried up, as have daily volumes on the JSE. Ten years ago the JSE had more than 700 listed companies, today the number is around 350.

Our construction industry is on its knees, retail is in a deep funk and the over-traded local listed property funds are starting to see the horrors of horrors: downward adjustments in rentals. This is like an avalanche waiting to happen…

Eskom itself, sits like a giant anaconda, squeezing all life and profits out of the SA economy. This is now starting to be reflected in the profit numbers—or lack thereof—for SA’s corporate world. More and more public companies are now openly blaming Eskom for their poor financial results, mining companies and smelters amongst the primary ones. And that was before the increased Eskom tariffs were announced. Who knows what an annual escalation of 15,9% per year over the next five years will do to company profitability?

SA’s Treasury has often in the recent past been accused of providing over-optimistic economic growth and tax revenue numbers. All of the growth/revenue number since 2012 have resulted in downward adjustments, often barely months into the new fiscal year. This year seems to be no exception.

In March this year, according to Treasury numbers, tax revenues have already shown a sharp decline in overall tax collections. It shows a collapse in profits and hence dividend to shareholders.

Could our market and economy turn around and suddenly become the new financial Eldorado?

But if the signs are there, I will be the first to applaud any improvement. But until then my view remains the same as it has been for almost 8 years now: increase your offshore exposure dramatically if you hope to protect your capital.

Magnus Heystek is the investment strategist at Brenthurst Wealth.

Things could still get worse

The true cost of Hurricane Jacob