The route to kleptocracy

Paul Trewhela writes on the relevance of Stephen Ellis' book 'This Present Darkness: A History of Nigerian Organised Crime' for SA

When power rests on ability to pay bribes

With its intensive focus on state capture and the toxic relations between politicians and crime, the new and last book by the acclaimed historian and rigorous researcher Stephen Ellis is a clear and urgent warning to South Africans to deal with home-grown corruption.

The book also provides detailed information about how South Africa became a “key site” for Nigerian fraudsters, beginning even before the transition from apartheid in 1994.

Ellis, the Desmond Tutu professor in social sciences at the Vrije Universiteit in Amsterdam, completed This Present Darkness: A History of Nigerian Organised Crime, from his sickbed. He died, aged 62, from cancer in July.

Ellis was also the author of two major studies of the ANC in exile, most recently External Mission: The ANC in Exile (2012), which remains a classic on its subject.

Rigorously sourced (references make up 45 pages at the back of the book), Ellis’ special concern in This Present Darkness is to try to identify how the culture of organised crime arose historically in Nigeria from its particular social, cultural, political and – of major interest to him – religious history. 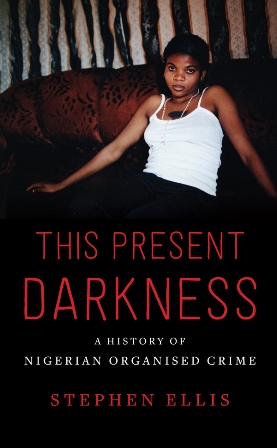 Notably, he provides a detailed picture of the colonial experience of indirect rule, which he says must be understood in order to understand the origin of later practices of organised crime and corruption in Nigeria.

Doubtless, a reason why Nobel Prize-winner, Wole Soyinka, as Ellis reports, described the formation of the Nigerian character as “an incongruous juxtaposition of tragedy and the parody of real life”.

While Ellis is at pains to stress that there are many Nigerians who do not engage in criminal activity, he writes that “everyone who has grown up in Nigeria has acquired a deep experience of pervasive state corruption. Practices of deception are simply a fact of life, like malaria…”.

More than 50 years ago, he notes, the situation was such that one Nigerian writer thought the idea that “the attainment of material riches is the supreme object of human endeavour” was so widespread it “largely pervades Nigerian society”.

Ellis also cites the Polish-British sociologist, Stanislav Andreski, who invented the term “kleptocracy” to describe the system of government he found in Nigeria in the early 1960s.

The essence of kleptocracy, according to Andreski, is when the functioning of the organs of authority “is determined by the mechanisms of supply and demand rather than the laws and regulations”.

Even in the period immediately after independence in 1960, Andreski wrote, Nigeria was “the most perfect example of kleptocracy”, since “power itself rested on the ability to bribe”.

In other words, money rules – not the democratic authority of the people expressed in laws made in the national assembly by the people’s elected representatives, and enforced by public authorities held to account by parliament and the courts.

Ellis notes how Nigeria’s oil minister said in 1984 that the country had lost $16-billion (R242-billion) of oil revenues in the previous five years, the result of fraud carried out by an “international mafia” – about a fifth of its oil revenue.

According to the minister, crude oil was being diverted at sea by senior officials who received payment in dollars. Oil was also being sold illegally by officials of the government’s oil company, the NNPC. Products from Nigeria’s own refineries were being diverted to foreign ships for sale abroad – a process known as “bunkering”.

Ellis writes that in South Africa, Nigerian scammers “even managed to defraud the apartheid intelligence service, the National Intelligence Service, to the tune of R1.9-million, as its director sheepishly told his parliament’s public accounts committee”.

By 2009, he writes, South Africa was “a major centre for Nigerian fraudsters, some of whom had managed to bribe officials at the Companies and Intellectual Property Registration Office. Nigerian scammers were able to mimic leading companies and, for example, to receive tax refunds from fake accounts and to intercept cheques”.

The book has received top-level international attention, with an excerpt about the Nigerian-invented “Four One Nine” scam published online this week by the US journal, Newsweek.

Ellis places his final emphasis on the global nature of modern organised crime which, he writes, has shown itself “very successful – perhaps even more so than multinational businesses – in integrating local identities and practices into organisations with a global reach. Nowhere illustrates this better than Nigeria”.

The book was released last week – one week before a summit on global corruption opened in London attended by representatives of more than 40 states, including very prominently, the president of Nigeria, former General Muhammadu Buhari.

Buhari was voted into power on an anti-corruption ticket.

This week, Nigeria was listed at place 136 out of 168 on a global corruption index compiled by Transparency International, with Zimbabwe even lower down the scale at 150, and Somalia one from the bottom at 167.

Oil-rich Angola, ruled by the MPLA, and a main base of the ANC in exile between 1977 and 1988, was placed by Transparency International among the most corrupt states in the world, at 163. One in six children in Angola die before the age of five, it reported, making Angola the “deadliest place in the world” to be a child.

A review in the Financial Times (London) last weekend noted that Ellis “provides little succour for those Nigerians who would prefer to see their country cast in a brighter light. To paraphrase his thesis, a gangster state tends to breed gangsters. Reading between the lines, however, This Present Darkness offers an alternative future in which the ingenuity and commercial acumen of Nigerians could be turned to far more positive, productive use”.

That is a question for Nigerians.

South Africans will find much in This Present Darkness that rings familiar. The question they must answer is how to claim democratic control of this society, so that it does not travel down a similar route to kleptocracy.

That is a mode of government and society that could not be further from the ideals of the founders of modern South Africa, or the principle of the Freedom Charter that “The people shall govern!”

# A paperback edition of This Present Darkness is due for publication by Jacana this month. It makes essential reading.

Paul Trewhela edited MK’s underground newspaper, Freedom Fighter, during the Rivonia Trial, and was a political prisoner from 1964 to 1967

This article first appeared in the Daily Dispatch.

Corruption is what other people do