The saddening decline of South Africa

Phumlani M. Majozi says the governing elite that shapes our public policy must not use Covid-19 as an excuse

The saddening decline of South Africa

It is heart-breaking. It really is heart-breaking to see South Africa, a country that once had huge potential, continuously in decline. Now you may think that I’m just being alarmist – or that I hate my country. No, I am not being alarmist, and do not hate my country of birth.  The statistics, show that Nelson Mandela’s Rainbow Nation is declining.

South Africa’s economy contracted by 7% in 2020 – it is the biggest deep in 100 years. Furthermore, on the bad news; when one adjusts for inflation, South Africa’s GDP per capita reached its zenith in 2014 – and has since then been on the decline. The economy has not grown by more than 2% since 2013.  Now that is again, bad news. It’s a reminder that we were already on the decline before the COVID19 pandemic. People forget this – and we must remind them. The governing elite that shapes our public policy, must not invoke COVID19 as an excuse.

With the population growth exceeding economic growth, South Africans will become poorer in the upcoming years.

We are still stuck in the longest downward business cycle since World War II. Unemployment has shot up to 43% - which is staggering in contrast to other major emerging markets. As more young people leave high school, and enter the workforce, unemployment in this moribund economy will rise and that will exacerbate the crisis. Disheartening, right? And demonstrates that we have a long hilly journey ahead of us on economic development.

Eskom, the government-owned electricity supplier remains a complete joke, and the biggest risk to the economy. As usual, it is mired in managerial controversies. This time its white CEO, Andre de Ruyter, is accused of racism – and the allegations will be investigated. Surely this will distract the reform process that is desperately needed in that company. The organizational politics will cost the company and the general public. That is another bad news for South Africa.

Amongst South Africa’s biggest problems – that slows our economic productivity – is the government’s excessive spending. Our government spends the money it has and doesn’t have – continuously accumulating deficits and debt.  How irresponsible! This high propensity to spend by politicians is not going anywhere anytime soon – as famed economist Mike Schussler wrote in his post-budget analysis last month.

Over the past decade the government has always missed its debt-to-GDP targets. The actual debt-to-GDP ratios were bigger than what they had initially projected. So, this history indicates that we would be naïve to believe that these African National Congress (ANC) politicians will meet their debt stabilization targets in the next four years, and beyond.

South Africa lags behind other major emerging markets on the key economic fundamentals. The very high unemployment numbers will slow our economic recovery post the COVID19 pandemic – which will prolong our economic crisis.

It is poor decision-making from the ruling party the ANC that got us here – and of course the people who vote for it. One gentleman who served in Thabo Mbeki’s administration once told me that the outcome of the ANC’s 52nd elective conference in Polokwane in December 2007, imposed great harm on South Africa’s democracy and post-1994 economic gains. It was hard to disagree with him. 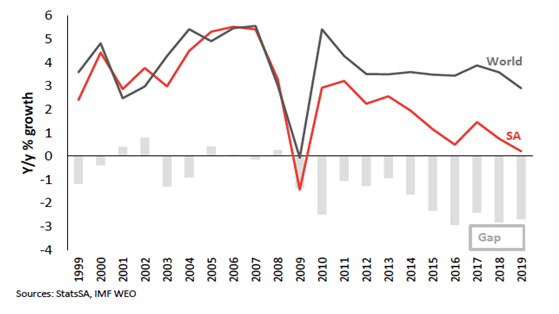 It is hard to see South Africa’s economy bouncing back to roughly 4% economic growth under the ANC government. The party remains factional – cannot formulate coherent pro-market and pro-business policy. People accused of corruption still hold powerful seats, and Jacob Zuma remains a divisive figure in the party.  The party is rotten to the core, that we are now witnessing its slow death.

There is nothing surprising about how decomposed the ANC has become in the last 26 years of its governance. Liberation movements across the African continent have evolved into corrupt, repressive machines over the past 60 years of Africa’s independence. This ANC reminds us of this African history.

The saddest news is that in this dark period of our economic times, more skilled professionals are leaving South Africa, emigrating to better countries. This is according to the recruiting firm, Induku Consulting Group. These professionals are emigrating to better countries. Countries that are better by corruption, economic advancement, crime, unemployment, and by opportunities.

We have a big problem, that only we voters can resolve with the power of our vote.

Ramaphosa must confront the labour unions this year

Looking back at Trump’s presidency

A second chance in life