Up until shortly before the 1st November 2021 local government elections it appeared that the African National Congress would continue getting away with it appalling record in government. It seemed probable that despite significant underlying discontent the ruling party would win a similar share of the vote as it had done in 2016. Yet something seems to have given, in the final stages of the campaign, and for the first time ever the ANC’s support fell well below fifty percent of the vote nationally.

As Pierre du Toit has noted the mass of newly liberated citizens formed a “historic block” of loyal voters post-1994. In national elections since 1999 this block of over ten million voters have returned the ANC to power with super-majorities which have only slowly been eroded, despite two significant splinters. In the local government elections, where turnout is lower, over eight million voters generally turned out for the ANC. The ANC’s overall margin of victory was really determined by how effectively the opposition parties were able to turn out their supporters. 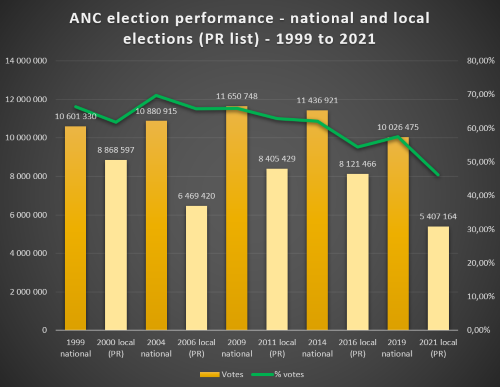 In this local government election however, the ANC secured only 5,4 million votes on the PR list, down 2,7 million from the 8,1 million it won in 2016. The ANC’s overall share of the PR list vote fell to 46,1%, down from 54,5% in 2016. The percentage result would have been worse for the ANC were it not for the Democratic Alliance’s equally dismal failure to hold onto, and turn out, its own traditional support base.