The following factors should be borne in mind when thinking about the prospects for resolution:

1. The pattern and growth of enrolments.  Table 1 sets out the number of students enrolled in universities since 2010.

Note:  The 2015 estimate is preliminary

It is therefore desirable to estimate the distribution of households with at least one student across these three categories.  This distribution is not the same as the distribution of all households.  Other things equal, a higher household income will improve the prospect of gaining a National Senior Certificate pass at the degree or diploma level and entrance into universities.

Source:  Own calculations based on the 2015 General Household Survey

In the light of Table 3, one may ask: is the demand for ‘decommodified education’ (i.e. free across the board) related to the fact that over a third of contact students come from affluent households?

4. The balance between the block and earmarked grants to universities, on the one hand, and the growth in student numbers, on the other is going to need attention.

There is controversy over the basis for inflation adjusting university subsidies.  One option is to use the Consumer Price Index.  Based on a commissioned study, the universities have been arguing that the CPI under estimates inflation.  The study produced a Higher Education Price Index and found that it has increased by 7.5% in 2013, compared with a CPI increase of 5.7%.  On that basis, the universities are assuming that this disparity will last indefinitely.  It was the basis of their application for an 8% fee increase in 2017.

But will the HEPI always outstrip the CPI by this margin?  It seems unlikely, especially since staff remuneration constitutes nearly 60% of university costs, so that an index of unit labour costs will be the main determinant.  One would expect staff remuneration to rise in accordance with unit labour costs outside manufacturing, and so adjustment using this index is a third option.

i. The widening gap between the HEPI and unit labour costs renders the projection of a HEPI permanently 1.8% above CPI implausible. 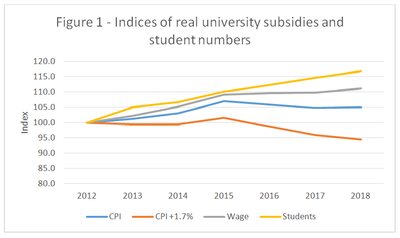 5. Modelling.  There have been various attempts at modelling the effects of different proposals.  Most of these are not worth the paper they are written on, since much of the necessary information is not in the public domain.  An exception is the modelling work done by the Treasury in preparation for its submission to the Heher Commission.  It found, on reasonable assumptions that over a three year period (2017/18 to 2019/20), the additional cost of a no fee policy introduced in 2017 would be R 71 billion.

6. NSFAS reform.  Efforts are being made to draw the private sector more fully into NSFAS, both through grants and loans.  Recovery of loans is also being pursued with more vigour.  Precisely what can be achieved remains to be seen.  It should be noted that NSFAS loans already have a large grant element.  Consider the case of a full time Bachelor of Arts student who passes all her courses the first time round.  She qualifies for a rebate of 40% of the loan advanced in her first and second years and 100% rebate in her third year.  She then has a year’s grace period and faces a rate of interest well below the rate for 10 year treasury bills.  Assuming she repays over ten years, the net present value of repayments is only about a quarter of the net present value of the advances.

Nongqawuse said that: ‘There would rise cattle, horses, sheep, goats, dogs and fowls and every other animal that as wanted and all clothes and everything they could wish for to eat, and all kinds of things for their houses should come out of the ground[1].  Not as it turned out, and not in this case either.

1. While students have the right to protest and to represent their views to departments, schools, faculties and administration within the universities and to the government, harm to people and damage to property makes problems worse rather than better.  It also exposes the perpetrators to disciplinary action and criminal prosecution.  Actions have consequences.

3. What ‘decolonised education’ means will have to be worked out discipline by discipline and university by university.  There are procedures within each university for curriculum change which should ensure quality control.  Fashion should not trump academic depth.

It is not easy to be the first in a family to enter higher education.  Household income is likely to be lower than for other students and there is the strain of entering a new and different world.  Success will come to those determined to overcome difficulties, rather than to rock throwers and arsonists who know in September that the academic year is lost.

Reform of SOEs: The process

The Zombie of Auckland Park

When the state is the predator and the people prey

MAILBOX: Look out world, South Africa is going to bounce back – Rob Opie