Charles Simkins, in the first of six briefs, gives a statistical overview of urban transport

Travel In Cities And Towns I - Statistical Overview: Evidence From The 2016 General Household Survey

Travel in South Africa’s metropolitan and urban areas has been shaped by two related factors: a history of racial segregation and relatively low population densities in former white group areas. Inefficient cities have resulted in inefficient patterns of transport. Two developments make current conditions different from those of forty years ago: the end of legally compelled segregation and the rise of the minibus taxi business. Yet de facto residential segregation remains pervasive, cities have made little of the substantial investment necessary to improve public transport, and congestion on often deteriorating roads has risen as the number of cars on them has increased.

This brief and the next seek to present key information from two sources: the 2016 General Household Survey and the 2013 National Household Travel Survey. The second, specialist survey has more detail, but information in it covers only weekdays (Monday to Friday), and its complicated structure has resulted in information which, in some respects, is seriously incomplete. Nonetheless, the two sources together yield useful base line information on the ‘modal split’ (the distribution of travel by mode of transport), the length of travelling times, the cost of travel and the influence of household income on travel patterns.

At the personal level

For work and education separately:

At the household level

For minibus/sedan taxis, buses and trained separately and for the preceding week:

- Distance from home to transport.

The GHS data are based on the place of residence of households and they do not permit a distinction between travel within the relevant metro and urban area and travel outside it.

The modal split and time taken to work and educational institution

Table 1 sets out the modal split for trips to work and their average duration in minutes. Nearly 10% of working people in metros work at home and have no need to travel. They would have to be excluded if travellers only were to be considered.

The average times of travel are generally shorter in urban areas than in the metros, not surprisingly given their smaller extent. Travel by bus and train is, on average, longer than travel by minibus taxi, lift club and own car. Average walking time is low, suggesting that most people walk because their work is nearby.

Table 2 sets out the modal split for trips to educational institutions and their average duration in minutes.

Walking far outweighs any other mode of travel in both metro and urban areas. Then comes travel by car or other private vehicle. Vehicles hired by a group of parents comes third and taxis fourth. Travel by bicycle or motor cycle, bus and train accounts for 6% of trips in metro areas and 4% in urban areas. Free travel by bus or minibus provided by educational institutions account for about one in forty trips.

Figure 1 displays the distribution of travel times to work and educational institution in metro and urban areas combined. 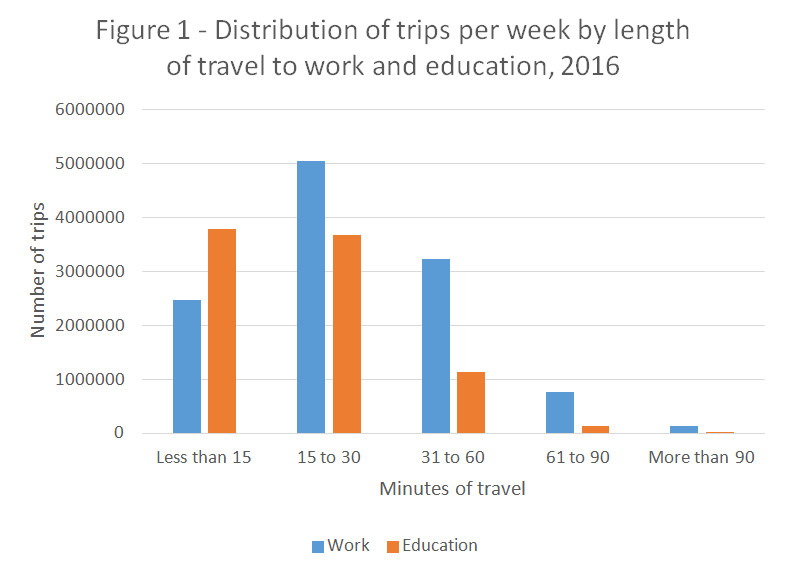 Expenditure on taxis, buses and trains

In round terms, turnover in the minibus taxi business in 2016 was R 48 billion. Buses accounted for a further R 14 billion and trains R 3.5 billion.

These figures can be checked against household expenditure on transport from the Living Conditions Survey 2014/15. Table 4 sets out the LCS estimates for South Africa as a whole

There is reasonable correspondence between Tables 3 and 4, given that the dates are 18 months apart, though the estimates of expenditure on trains in the GHS is about 50% higher than in the LCS. Expenditure on cars and motor cycles constitutes 77% of all transport expenditure.

Table 5 sets out the extent of ownership of cars and access to them without ownership.

Table 6 sets out the percentage of households reporting at least one trip by mode in the week preceding the survey.

From the 2015 GHS, it is possible to calculate the percentage of household income spent on minibus taxis, buses and trains for households which:

- have taken at least one minibus taxi, bus or train trip in the seven days before the survey.

Bear in mind that total transport costs have not been captured in Figure 2. 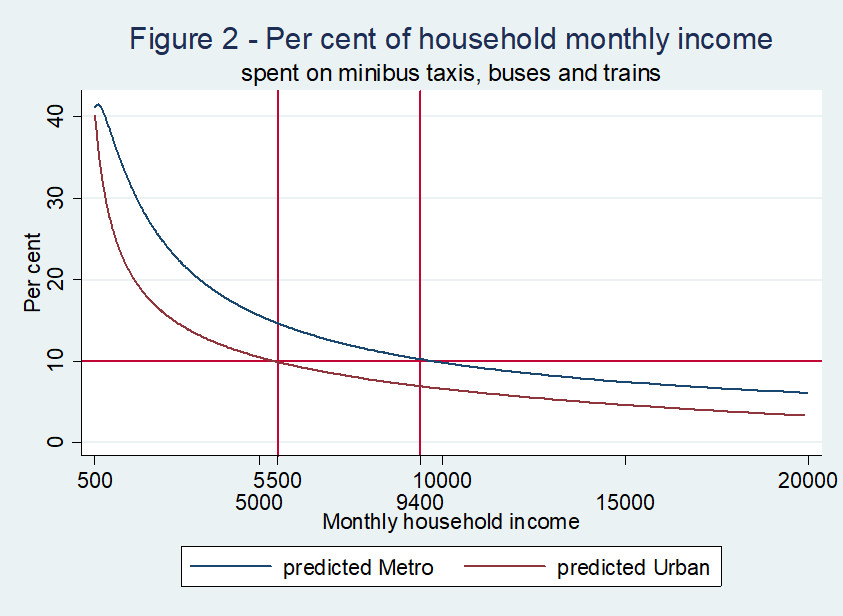 Distance from home to nearest pick up point for taxis, buses and trains

Table 7 sets out the distance from home to the nearest pick up point for minibus taxis, buses and trains.

One reason for the greater popularity of minibus taxis is that the distances to pick up points are smaller than for buses. Trains are the least accessible and most likely to require an auxiliary vehicle trip to reach.

How does the percentage of household expenditure on transport in South Africa compare with other regions of the world?

Table 8 sets out comparative data on the percentage of household expenditure spent on transport.

In South Africa, 16.0% of household expenditure in urban formal areas is spent on transport, compared with 18.7% in urban informal areas.

This brief has outlined the modal split of trips to work and educational institutions and the average time taken. It has also presented information on household expenditure on minibus taxis, buses and trains, showing the dominance of the minibus taxi industry among the three modes. Finally, it has summarized the distance from home to minibus taxi, bus and train pick up points.

The information here will be supplemented in the next brief which is based on the National Household Travel Survey of 2013.

[1] If more than one mode is used, the mode covering the longest distance is recorded

[2] The time is based on all the usual modes of transport, going one way

BizNews Investment Conference: Piet Viljoen on how to find hidden gems on the JSE