The previous brief in this series considered evidence about travel from the 2016 General Household Survey. This brief seeks to answer two questions:

- Does the National Household Travel Survey (the NHTS) confirm or contradict the information in the General Household Survey?

- What additional insights can be gained from the NHTS?

Table 1 displays the percentage of people travelling in the seven days before the survey. The pattern is similar in metro and urban areas.

There are twelve reasons for travel identified in the NHTS: usual work place, in the course of work or business, visiting friends or relatives, taking someone somewhere, shops, looking for work, medical services, traditional healer, welfare offices, church and other[1]. Table 2 sets out the distribution of travellers by number of reasons for travel on the weekday travel day selected[2].

A trip is defined in the NHTS as a one way movement by a single person from origin to destination. A person traveling to and from work takes two trips. Should a family consisting of a father, mother and two children go to the shops and then return home, this will count as eight trips.

Table 3 sets out the distribution of trips by purpose. Apart from returning home, the most common reason for travelling is to get to work, followed by getting to an educational institution, going to the shops and visiting friends or relatives.

Table 3 sets out the data as reported. If people returned home immediately after an outward trip, the proportion going home would be 50%. However, people may make multi-purpose trips such as going to work, then to the shops and then home.

Table 4 sets out the modal split.

The distributions of reasons for walking all the way are set out in Table 5.

81% of people in metro areas walked because their destination was nearby, or by choice, or for health reasons, compared with 79% in urban areas. 9% in metros and 15% in urban areas did so because of problems with public transport or fuel costs.

The influence of household income on the modal split

Table 6 shows the influence of household income on the modal split. Households are divided nationally into five income quintiles. Walking decreases monotonically by quintile and car travel increases monotonically by quintile. The use of trains peaks in the fourth quintile. The use of buses and minibus taxis peak in the third quintile in metros and the in fourth quintile in urban areas.

Time spent travelling to work and to educational institutions

Table 7 sets out the average time taken to get from home to work or an educational institution by mode of travel.

Figure 1 displays the distribution of times taken to travel to work. The distribution is represented by an ogive (or cumulative distribution) curve. For any given time, the curves give the probability that the travel time will be less than or equal to that time. For instance, in urban areas 0.5 (or 50%) of trips to work take 34 minutes or less and in metro areas, 50% of the trips take 49 minutes or less. 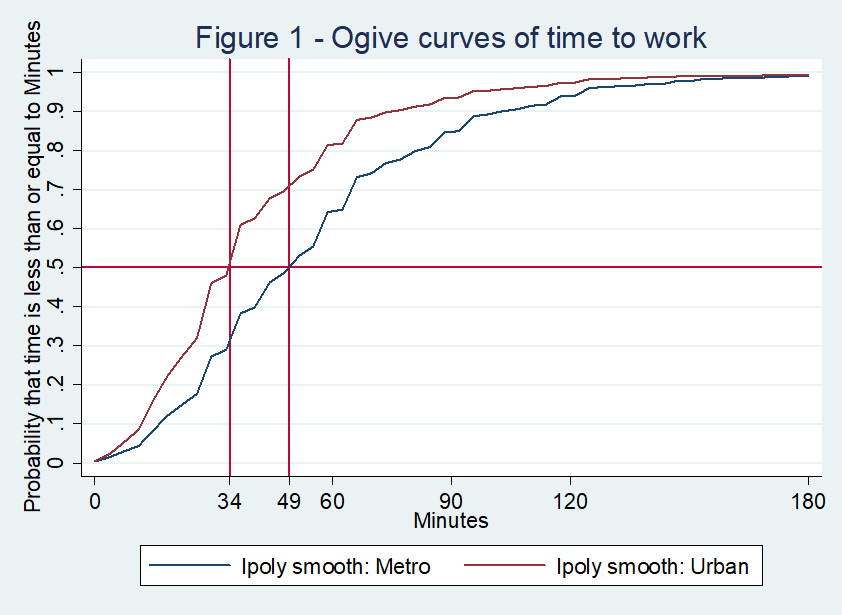 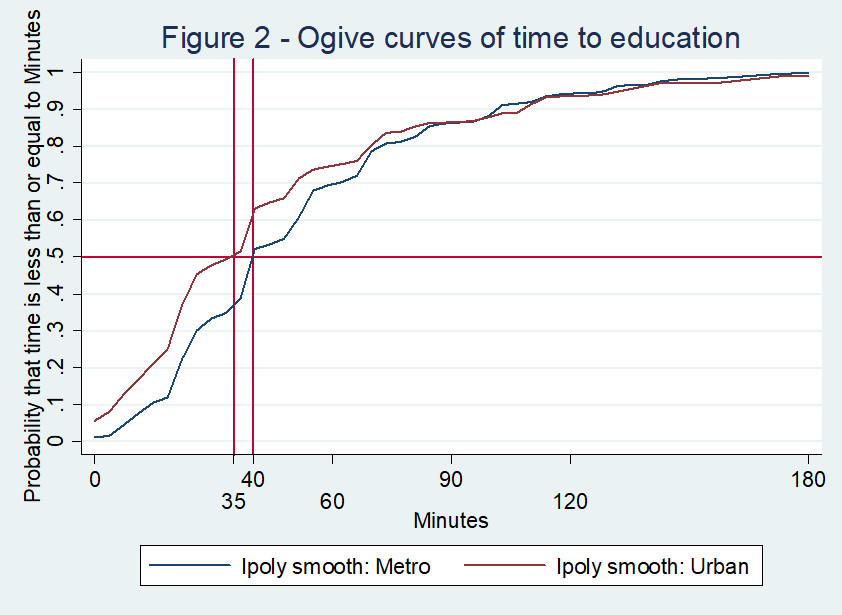 How do average travel times to work in metros compare with those in cities around the world?

The average time to work and percentile position (from the shortest travel time) of four South African metros are set out in Table 8. 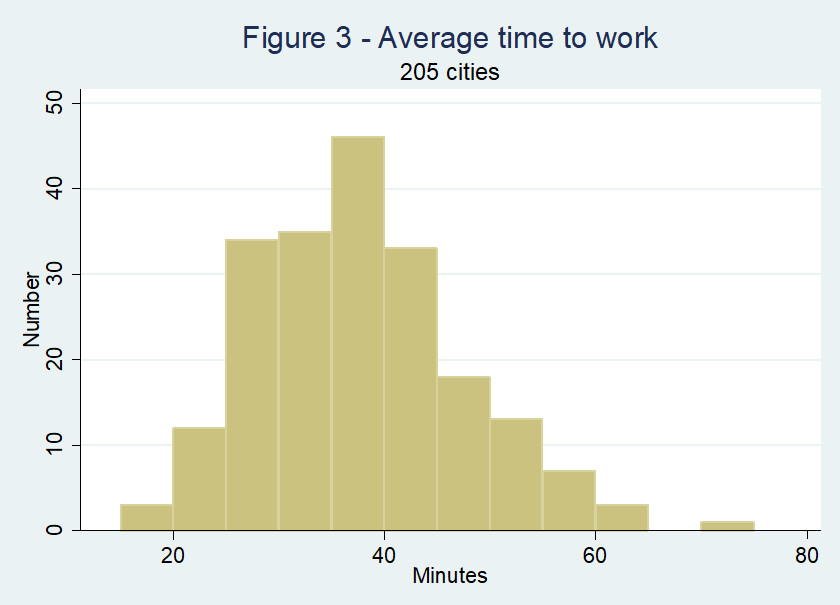 The NHTS confirms the pattern found in the GHS that minibus taxis are used for more trips than buses and trains combined.

The average travel times recorded in the NHTS are considerably higher than those contained in the GHS. In light of the Numbeo data, the NHTS times are more accurate in recording the door to door travel times.

Data extracted from the NHTS include the following:

The purposes of travel

The modal split of all forms of travel

The reasons for walking all the way to destinations

The influence of household income on the modal split

The time spent travelling to work and to educational institutions

The distribution of time to work in 205 cities globally and the position of four metros in that distribution.

[1] The NHTS has another: going home. This category is omitted here since it amounts to a return journey from a trip taken for another purpose.

[2] These days were selected randomly from Monday to Friday with equal probabilities.