Trump and the US media

Now why on earth would any informed, rational person vote for Donald Trump, the American buffoon? Is it possible to construct a fictional figure who more grotesquely embodies the crass, chauvinistic, vulgarity of the archetypal "Ugly American" lurking in the interstices of the cultivated Western imagination?

From one outrageously juvenile insult to the next. From one ignorant, off-the-cuff comment on sensitive political matters to the next, the contrast of "the Donald" alongside the polished rhetoric and slick competence of his main Democratic rivals is the stuff of acute embarrassment. Unsurprisingly, in the beginning the MSM treated Trump with amused disdain.

"The Establishment" laughed at his schoolboy insults, marvelled at his ability to hog the headlines, gasped as he kept winning against an array of established Republicans with proven records and experience, speculated on the remote possibility that he would actually capture the Republican nomination and never doubted that he would fizzle out.

And then the joke was over. Terror hit the USA and Europe again and again - and again. Try as he might, Obama couldn't deny it was mainly Islamist terror - even though every possible alternative was dangled before the public to see whether they would take the bait.

And the contagion seemed to spread across Europe to the rest of the world. Every borderline personality disorder and petty criminal seemed to see in ISIL a model for their own grand statement on the desperate futility of their lives. The failed coup in Turkey which enabled that latent Islamist dictator, Erdogan, to at last have an excuse to abrogate democratic freedoms seemed to confirm that the world was going mad.

And Hillary Clinton's smooth evasion of responsibility for her e-mail transgressions while Secretary of State were no longer so easily swept under the carpet. Her own triumphalist, ambitious, but totally scripted, political personality contrasted poorly with the simple passion of Bernie Sanders the Democratic unknown who also threatened at one point to upend the Democratic machine.

Things were getting out of hand and the distant spectre of a Trump victory began to seem a real possibility as the polls began to shift. In response, the immense reserves of money, influence (hard and soft) of the Clinton-Obama dynasty and political skill and experience of the Democratic Establishment were now mobilised as the Democratic National Convention rolled around.

The American media was speedily whipped into line. Here is one not entirely amusing but certainly instructive example of media lockstep: 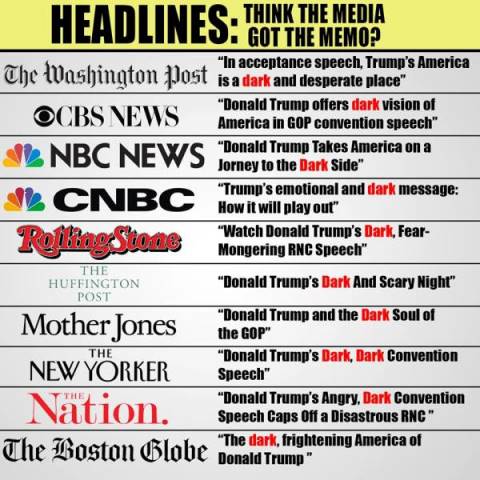 That was only a foretaste. When Trump jokingly suggested that Russia send the hacked e-mails back to the FBI the message went out from on high: Trump not our Hillary, is the security risk,. Trump is bed with Russia. Trump is a traitor to America and will sell us down the Volga for a real-estate deal with an oligarch. All the Cold War tropes were dragged out of the closet and dusted off for the occasion by a seemingly endless array of media spokespersons on both sides of the Atlantic

Then the Clintonites really hit the jackpot. They put Mr and Mrs Khan, who had lost a son in combat as an American soldier, in front of the camera and, in a remarkably emotional and polished speech, Mr Khan laid into Trump for, allegedly, denying the rights of Muslims to a safe and respected place in the USA. While his son died fighting for America what was Trump doing? What sacrifices had he made while enriching himself and his family?

It was, in my view, an entirely reprehensible piece of theatre. The Clinton campaign ruthlessly paraded the bereaved family as prize exhibits in their political battle and, let it be said, the Khans allowed their grief to be turned into a political commodity. But it was stunningly effective, in good part because it revealed with blinding clarity that Trump was totally inept when confronted with slick political predators like the Clinton-Democratic machine.

As he flailed around he only made things worse. First Trump insulted Mrs Khan by suggesting she didn't speak because of Muslim gender role norms. Then he classified his own single-minded entrepreneurial ambition as equivalent to the loss of the Khan's son on the scale of sacrifice. The media eagerly grasped the knife which he handed to them and twisted in his chest with moralistic relish.

So, barring a black swan event, Trump is history. Clinton will be a good president, but the big issues are being left unexamined in the political theatrics. One is the state of USA and possibly global journalism. Where are the independent, insightful journalists whose experience and sense of personal integrity allow them to swim against the tide.

I have looked through the major media outlets and, almost to a man (and woman), the media have followed the predetermined narrative line: "Trump bad" in every which way you could think of. Every piece of journalistic bait dangled by the Democratic campaign was eagerly snapped up and Trumps words were not only minutely examined but were distorted and exaggerated to come up with the predetermined conclusion - over and over and over again.

Needless to say, barring some really horrific gaffe or disclosure, the media eyes will never critically stray onto Clinton protected territory. If, in a sense, the media are the referees of the political debate this was the height of corruption. It makes Hansie and the boys look like angels in comparison. Those who have been at the receiving end of a predetermined media line will know the sickening impact it has on the target, and Trump never had the insight, skills or support to dig himself out of the holes prepared for him by his enemies.

Not only are these tendencies bad for democracy but they fail to address some of the genuine issues which Trump mangled. These include a serious debate over the delicate problems surrounding Muslims both in the USA and those seeking to enter due to the collapse of their own dysfunctional states. In the light of the radicalisation of vast stretches of Muslim territory and within Western enclaves, such natural human impulses pose enormous challenges to Western democracies.

These are classic political questions, and the realist position needed a spokesperson with the necessary agility and information to mount a genuine challenge to the Obama doctrine of "see no evil and speak no evil", to simplify a more subtle position. Trump provided the perfect foil and ruined any chance of serious scrutiny, thus allowing the demonisation of any critical challenger to the ruling consensus to continue unabated.

Just as important is the current dominance of leftwing, "group based" issues in the political space. The shared American identity and its supportive mythology centred on individual responsibility, self-discipline, personal ambition, freedom and voluntary association is increasingly under assault from two main sources.

One is the greater role of the state in advancing social and political equality by legislative and other means and, in a parallel but synergistic track, group-based activism in the service of special interests of all kinds. Much of this is inevitable and desirable in a large, heterogeneous population in a successful society. But while that may be so not all agendas are benign and neither are all outcomes.

These complex transitions are best negotiated through democratic processes in which two or more relatively competitive parties compete within strong democratic norms and an informed, independent media. Failing that, abuses of power creep in along with the corruption and marginalisation of some groups which follow in the wake of unequal power relations.

The American Constitution is very effective at distributing power but, at the moment, the failure of what can be broadly termed "conservative" voices to find common ground and appropriate expression has allowed a skewed perspective to dominate. There is an excess of leftwing arrogance and authoritarianism which is overwhelming the more thoughtful, moderate conservative voices. This encourages loonies and they tend to abound on the rightwing platforms and in the shadows.

This election cycle has possibly worsened that imbalance. With the election of Clinton it will be interesting to watch what happens over the next 4 years. South Africa like the rest of the world, needs a strong America.

Too much Trumpism in our politics

The accidental Trumpism of Lindiwe Mazibuko