The United Nations Sustainable Development Goals (SDGs 6.1) targets the attainment of universal access to safe and affordable drinking water by 2030 [1]. In South Africa, access to sufficient water is a right accorded to all citizens and entails a constitutional obligation on government.

In order to meet target 6.1 of the SDGs and fulfil its constitutional obligation, government is required to make appropriate investments in water infrastructure delivery. In addition, the provision of water infrastructure has positive ripple effects for public health and the economy.

Provision of safe and affordable water remains a priority in South Africa but its realisation remains precarious. The country is committed to a policy of free basic water, aimed at furnishing all poor households with a basic water supply (25 litres per capita per day) at no cost to the household [2].

Despite these commitments, access to water infrastructure provision remains an elusive dream for many households. For instance, the 2018 General Household Survey (GHS) [3] indicated that in 2018 thousands of South African households still depend on unimproved and unprotected sources of drinking water. These include dams and pools, rivers and streams and springs (Figure 1). Drinking contaminated water exposes the consumer to waterborne disease-causing organisms like bacteria, viruses, parasites and an array of other contaminants like heavy metals, pesticides, fertilizers, and human and animal waste.

Figure 1: Distribution of households by source of drinking water

The absence of water infrastructure has direct health implications. The World Health Organization [4] estimates that, globally, ingestion of contaminated water is responsible for 485 000 diarrhoeal deaths each year. And diarrhoea-related mortality accounts for approximately 20% of deaths among South African children under-five [5].

In addition, absence of appropriate water infrastructure compels thousands of households (mainly women and children) [6] to travel long distances to access drinking water [6]. This has multiple detrimental effects on their wellbeing such as;

· Women around the world spend collective 200 million hours a day collecting water [8]. Time spent fetching water and fuel reduces the time that can be devoted to generating livelihoods or in remunerated work [9]. 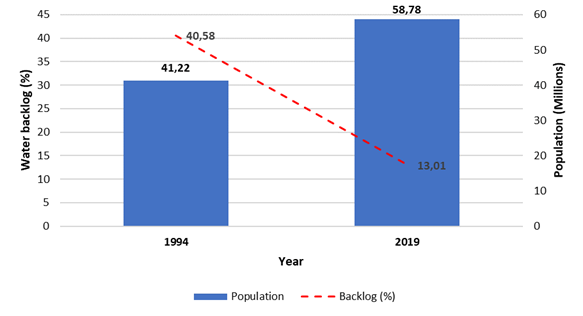 The distribution of the water infrastructure backlog (with households as the unit of observation) across Water Service Authorities is shown in the Appendix. The distribution is highly skewed. While the median value of the backlog is below 5%, 10% of water services authorities have backlogs above 25%.

Access to water infrastructure is defined as the provision of tapped water. This could be through a communal stand pipe located within 200m a dwelling, water in the yard or water inside a dwelling. The concept entails physical availability of the infrastructure without consideration of the quality or the reliability of the service. 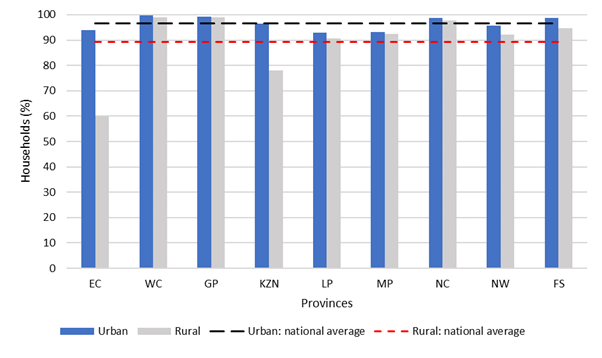 Figure 3: State of access to water infrastructure delivery per province

In addition to provincial disparities in infrastructure delivery, the data reveal a further dimension. This is socio-economic or spatial inequality. Access to water infrastructure provision across provinces is markedly lower in rural areas than in urban areas.

A rural area is an area that is not classified as urban. Rural areas may comprise one or more of the following: tribal (or traditional or communal) areas, commercial farms and informal settlements [11].

Agenda 2030 on Sustainable Development, adopted by UN member states in September 2015. At its core is the ‘Leave No One Behind’ (LNOB) principle. The principle entails that those who are worst off should be reached first [12]. For South Africa to conform to this principle, it is imperative that water infrastructure investment should prioritise provinces with high water backlogs, low access to water infrastructure delivery and rural areas in particular.

The LNOB principle and concomitant commitment to it would ensure a more equitable investment in water infrastructure investment and delivery by 2030. Conversely, failure to embrace the principle will only widen present disparities and lead to greater inequality.

Box and whisker plot
Percentage of households in backlog

The thick line in the box-plot represents the 3.9 median value (50th percentile of the distribution). The box contains observations between the 25th and the 75th percentile and the whiskers (lines) above and below the box, indicate the 90th and 10th percentiles. The circles above the 90th percentile whisker represent conditions in the outliers.

9. Geere J.&Cortobius, M (2017). Who Carries the Weight of Water? Fetching Water in Rural and Urban Areas and the Implications for Water Security. Water Alternatives. 512-540.

12. UN (2019). Leaving no one behind: AUNSDG operational guide for UN country Teams. https://undg.org/wp-content/uploads/2019/04/Interim-Draft-Operational-Guide-on-LNOB-for-UNCTs.pdf.

The stunning hypocrisy of Lebogang Maile

As trade unions we can no longer keep quiet – NUM