What future for South Africa?

Ever since the end of the Second World War, the question was whether whites would move quickly enough in offering to share power and thereby avoid the fate of becoming an impotent political minority.

A very perspicacious observer sensed that whites would delay the fundamental choice for too long. He was C. Louis Leipoldt, a well-known Afrikaans poet and public intellectual, who published a poem about The Fool and The Master watching a game of chess between the whites and the blacks with political control of South Africa as the prize.

“The much belauded Fool
Looked wise and pondered what he saw.
“I think” he said, “that if he tries
White still might make a draw!”

The Master smiled and shook his head
“You have left it all too late”.
“There is no doubt of it,” he said,
“It’s black to move and mate.”

Leipoldt wrote the poem in 1947 and died in the same year.

In South Africa serious thinking about the country’s future only started in the early 1970s. Dr. Anton Rupert was one of several South African business leaders who was a member of the Club of Rome. Concerned about rapid population growth that was fast depleting natural resources, the Club commissioned a study that would later appear under the title The Limits of Growth.

It predicated “overshoot and collapse” by 2070 if the world continued with “business as usual” approach and allowed a rapidly growing world population to destroy the economy and environment. Four decades later the forecasts would be vindicated by a team of Australian researchers

With the assistance of Rupert and some other South African business leaders who attended the Club of Rome meeting, the Unit for Futures Research was established in Stellenbosch in 1974. For many years its director, Professor Philip Spies, played a major in commissioning papers and thinking about the future in innovative ways. 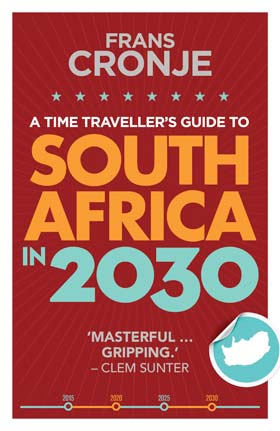 By the mid-1980s solving the racial issue and looming economic crisis could no longer be avoided. At this point Anglo American’s Clem Sunter began making a major contribution to the intellectual debate about the country’s future. He developed the options of the High Road and the Low Road as stark alternatives that South Africa was facing. He argued strongly that with a democratic constitution and a growth-oriented economic policy the High Road could lead South Africa to a prosperous future and stable democracy.

Writing in the Leadership SA issue of March 2008, with Chantell Ilbury as co-author, Sunter returned to the theme of South Africa’s future. The article argued that South Africa made the right choice when it chose the High Road in the early 1990.

The authors went as far to say that in 1994 South Africa “vaulted in the ‘Premier League’ of nations. It concludes: “South Africa has remained there as a result of 14 years of stable government and disciplined macro-economic policies, all of which took place in the context of the global ‘Long Boom’ scenario.”

Towards the end a note of pessimism creeps into the article. On international leagues that rated competitiveness and business friendliness South Africa was plummeting. Health and education systems were defective and there was the need for a dramatic reduction in crime.

The essay gloomily concluded that South Africa had ceased to be a member of the Premier League and was sinking to the Reserve League. It was even possible that South Africa could relapse into a “2nd Division”, which was usually marked by internal disharmony and eventually overt conflict.

Remember all this was written a year before Jacob Zuma became South African President.

A new book by Frans Cronjé, CEO of the Institute of Race Relations and a sought-after scenario planner, raises the debate on the future to a new level. His book is called A time traveller’s guide to South Africa in 2030 and is published by Tafelberg.

It is the best guide we have to the trends that are likely to unfold different between today and the year 2030. It also sketches four different scenarios that may unfold over the next thirteen years.

The book can be seen as constituting two parts. The first part tells of the tremendous successes of the ANC government in its first ten to fifteen years in power in building houses, and providing running water and electricity. Under Trevor Manuel, and the leadership of the Reserve Bank and Treasury the state’s financial affairs were in as a good shape as one could wish for.

The second part deals with the policy failures of the ANC government. First there was the far too rapid transformation of the civil service and the damage done by cadre deployment. Under white rule it took 55 years (from 1910 to 1965) for the civil service to reflect the 55-45 demographic ratio of the white community. Particularly in the technocratic departments and in the state corporations the NP government retained the scarce skills of English-speakers. Under the ANC government the civil service was transformed to conform to demographic population ratios within between ten and twelve years.

The ANC government inherited an unemployment problem but also made it far worse. In 1990 Dr. Wim de Villiers, an astute business leader before he became Minister of Administration and Economic Co-ordination, identified unemployment as the country’s major problem. In the 1960’s a half a million jobs were created in the industrial sector but in the 1980s it had dwindled to 28 000 (Sunday Times, 4 November 1990). This was largely as a result of relying too much on gold production and failing to develop competitive exports in the other sectors.

Then the ANC government came into office and passed the most labour-friendly legislation the developing world –with predicable consequences. Cronjé points out that the economy under NP rule seldom lost more than a million working days from industrial action until the early 1980s. In 2007 lost days had skyrocketed to an astonishing 13 million. In Jacob Zuma’s first term five million working days were lost in three of the five years.

Then there was the crisis in black education stemming from both the policy to use English as medium of instruction at a far too early stage, the collapse of discipline, and the excessive power of the unions. Along with the failure of black schools and universities government has imposed a demographic dictatorship by enforcing the 80-8-8-2 principle together with cadre deployment in the civil service, and as many other public institutions as possible.

Earlier on in the process a senior advocate in the prosecution service described the effect on morale as follows: "The department is supposed to render a service, and the best service is supposed to be the criterion [for promotion.] What now happens is that promotion does not depend on performance but on race. The result is that whites are too demoralised to perform because there's nothing in it for them-- no incentive. Conversely, there is no incentive for people of colour to perform because promotion is not dependent on performance."

In his preface Clem Sunter provides an admirable summary of the four main scenarios outlined in Cronjé’s book. First there is the rise of the “rightists” (or “regsgesindes” in Afrikaans). It emasculates rights and freedoms in an effort to boost growth and the living standards of all South Africans and it succeeds in promoting a sense of cohesion and purpose among South Africa very much like the rulers of Singapore and China have done. To me this looks like a recipe than could only work in a racially homogeneous society.

The second scenario is the rise of a left wing dictatorship, which pursues the classic socialist policies that attracted so many despots in recent history and that led to so much misery. This scenario is unlikely for the simple reason that South Africa lacks the prerequisite for such of form of rule, namely a brutal and disciplined army. At a recent meeting commemorating the Dakar conference of thirty years ago the retired ANC politician Aziz Pahad remarked that our army “is too weak to deal with even a mild Arab Spring”.

The third scenario envisages the disintegration of South Africa as a state under a weak and irresolute government and stagnant economy. Those who own property and have a steady income would live in beleaguered camps, while the poor would become ever more destitute and desperate. This scenario is unlikely to unfold in Western Cape but it could become true in many other provinces.

Finally there is a scenario called “the return of the rainbow”. People no longer wait for government to “deliver” houses, jobs and services, and begin to take command of their own destiny. Race-baiting commentators who are presently flourishing will become more and more discredited.

There is an increasing realisation that South Africans had it right in the late 1986 when large majorities in a sample of people living in the area then called the Witwatersrand preferred a joint government in which no groups dominated. Black support was as high as 75%. The idea that South Africa could evolve into a liberal democracy and remain stable was a pipe dream that only some academics can believe in. To my mind a government of national unity is the only system that can get us out of the mess the Zuma government has created.

Frans Cronjé’s book is by far the best account of the dilemma in which our country finds itself. Hopefully is spawns thousands of conversations about our future.

A wake-up call for the country

Another accolade as the Springboks win Laureus Team of the Year