Posel, Casale and Vermaak challenge the merits of the 'strict' as opposed to the expanded definition

The unemployed in South Africa: Why are so many not counted?

The official rate of unemployment includes only the unemployed who are actively searching for work. However, findings from new data challenge this practice. The ‘searching unemployed' are no more likely to find employment than the ‘non-searching unemployed'. This casts doubt on the idea that non-searchers are not committed to finding work. Furthermore, many people find jobs through social networks - but this job-finding strategy is not adequately recognised as ‘searching for work' in official statistical surveys. StatsSA should reconsider how they count the ‘officially' unemployed.

Since 1998, Statistics South Africa (StatsSA) has adopted a ‘strict' measure of unemployment as the official measure for South Africa: to be counted, an unemployed person must have "taken active steps to look for work or to start some form of self-employment" (Stats SA 1998: 1). The official rate of unemployment therefore excludes all individuals who report that they do want to work but have not taken active steps (as specifically defined) to search for work in the previous month.

StatsSA notes that it follows the guidelines set out by the International Labour Office (ILO) in 1982. These guidelines have been adopted in many countries. The reasoning is that, by not searching for work, an unemployed person signals a lack of commitment to finding work.

However, the ILO guidelines include a provision for relaxing the work-seeking criterion in coun­tries with "inadequate labour absorption" (Hussmanns et al. 1990: 108). Countries are advised to select the appropriate definition of unemployment depending on (a) the previous work experience of the non-searching unemployed and (b) how the labour-force commitment of the ‘non-searchers' compares to that of the searching unemployed on the one hand, and people who are not economically active on the other hand (Hussmanns et al.1990: 107-108).

How does South Africa fare according to these criteria? Which definition of unemployment is appropriate?

Panel data from the first two surveys (or waves) of the National Income Dynamics Study (NIDS) provide a new opportunity to evaluate the appropriateness of excluding the non-searchers from the official measure of unemployment. In NIDS, the same individuals and households are surveyed in a base year (wave 1) and subsequent years (wave 2 etc.), with 2008 and 2010/11 being the years for which data are available thus far.

We find substantive evidence that the non-searching unemployed form a legitimate and integral part of the labour force and should be included in unemployment measures - and in academic and policy discussions of the extent and causes of South Africa's persistent unemployment problem, as well as potential policy responses (see Posel et al 2013 for the full paper).

How serious is unemployment really in South Africa?

The question of which definition is appropriate to use in analysis and policy responses is no small matter: for example, in 2004, when the gap between the two definitions was largest, the non-searching unemployed (4.1 million) almost equalled the number of searching un­employed (4.2 million people). [In 2012 there were approximately 3.1 million non-searching unemployed and 4.5 million searching (official) employed (QLFS data). Also see the note at the end of the article. - Econ3x3 Editor] 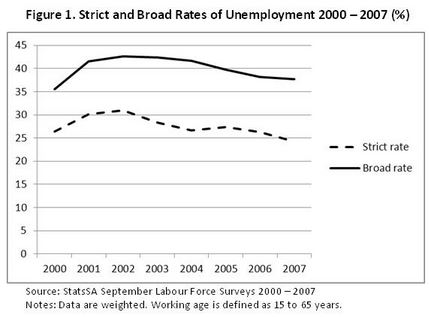 If the unemployed signalled their true commitment to wanting work by searching for a job, we would expect that the non-searching unemployed would be less likely to have worked before (being less interested in working) and less likely to find employment. However, our analysis of the NIDS data suggests that neither is true for South Africa.

Equal percentages of the searching and non-searching unemployed report having previous work experience (approximately 40% in wave 1 of NIDS) - and this is significantly higher than for not economically active people (17%). This suggests that the searching and non-searching un­employed have had a similar involvement in the labour market in the past - and that their previous labour market involvement contrasts considerably with that of not economically active people.

It is puzzling why searching for a job (as opposed to not searching) does not appear to increase the likelihood of someone's finding work. One explanation is that the unemployed change their ‘search status' frequently: many unemployed people tend to be stop-start work seekers. At times they become passive and do not search for work actively, but then they become more active again (see also Verick 2012). This means that their particular search status at the time of a statistical survey may reveal little of their intrinsic interest in working.

A further (and related) explanation is that the official StatsSA definition of ‘searching for a job' is restrictive. There is much evidence that the unemployed rely heavily on social networks to find work (Kingdon and Knight, 2006; Schöer and Leibbrandt, 2006). Similarly, many firms tend to recruit workers by word-of-mouth via their own workforces (Rankin 2013). Although the definition of search activity in official surveys includes social networks, the un­employed are required actively to have sought assistance from family or friends in searching for work. The more passive act of waiting to hear about available work opportunities from family or friends is not recorded as a search activity in official surveys, and the unemployed who rely on this job-finding method therefore will be excluded from the official rate of unemployment.

One of the advantages of NIDS over previous household surveys in South Africa is that it enables us to interrogate this issue. In this survey, individuals who have wage employment were asked how they found their job. Of the working-age individuals who had been (searching) unemployed in wave 1 and who were employed at the time of wave 2, more than half (55%) reported having found their jobs through social networks. The non-searching unemployed relied even more on networks: among those identified as non-searching in 2008 (wave 1) but who found a job by 2010/11 (wave 2), more than 60% reported that they had heard about their jobs from friends, relatives or members of their households.

Thus, the most common way of finding a job among the unemployed is through waiting to hear from family or friends about jobs that become available, rather than through active job search methods, such as registering at an employment agency, responding to job advertisements, or enquiring at factories, shops and other businesses to find out if work is available. This job-finding strategy is not recognised as ‘searching for work' in official statistical surveys.

A reliance on passive job search methods among the unemployed in South Africa would not be surprising given the persistently high rate of unemployment and the consequent low probability (or hope) of finding work. In addition, significant resource constraints and high rates of poverty raise the (relative) costs of actively searching for a job. With the economic marginalisation of rural areas, particularly in the former Bantustans that existed in South Africa under apartheid, many South Africans also only gain access to work by migrating considerable distances to places of employment. This raises the costs of searching for a job considerably.

Our analysis of panel data collected by NIDS suggests that the broad rate of unemployment, which includes the non-searching unemployed, provides a better reflection of the relationship between labour supply and labour demand in the South African labour market than the strict, or official, rate of unemployment.

With the high costs of active job search and the low probability of finding employment, many of the unemployed do not search actively, regularly or intensively for work, but rather rely on social networks to provide information about when an employment opportunity becomes avail­able - a rational strategy in the circumstances. This does not mean that the non-searching un­employed are less committed to finding work, or even less successful at finding work - but their personal expectations of finding work are surely lower.

Our findings thus suggest that there is little to distinguish the searchers from the non-searchers in terms of their commitment to finding work. We therefore argue that the non-searching un­employed form a legitimate part of the labour force and that their exclusion from the official rate should be reconsidered. At the least, this group of the unemployed should be included explicitly in both academic and policy discussions about the extent and causes of South Africa's persistent unemployment problem, as well as potential policy responses.

Until 2007, in the bi-annual Labour Force Statistics (LFS), StatsSA did publish both the strict and the broad unemployment rates, even though the former had an ‘official' status. When, in 2008, it switched to the quarterly publication of labour market statistics (the QLFS) it simultaneously, and without explanation, stopped publishing or mentioning the broad unemployment rate and publicly communicated only the strict rate to the media, who followed suit.

Discouraged work seekers, or the non-searching unemployed, were counted but categorised as ‘not economically active' and therefore not as unemployed. In this way the unemployment problem was suddenly ‘reduced' markedly. The QLFS did, though, in 2010 start to show statistics for an ‘expanded definition of unemployment' - but only in the appendices to the QLFS (QLFS table 2.3).

It should also be noted that, while doing so, StatsSA redefined their expanded definition to produce a sudden downward step, between 2007 (the end of LFS) and 2008 (the start of QLFS), of approximately 800 000 people in the expanded, or broad, count of unemployment. This wasn't explained either.

* At the end of 2012 there were approximately 3.1 million non-searching unemployed and 4.5 million searching (official) employed (QLFS data). The strict (official) rate of unemployment was 24.9% and the expanded rate 35.9%.

Verick, S. (2012). Giving up job search during a recession: The impact of the global financial crisis on the South African labour market.Journal of African Economies 21(3): 373 - 408.

This article first appeared on the Econ 3x3 website.

Does anyone care about our kids?

How will South Africa succeed? ANC, EWC need to be beaten – Frans Cronjé

OUTA: Karpowership licences approved by NERSA – where are the explanations?

SA says emissions will decline from 2025, in finance for clean energy transition