Jeremy Gordin reviews Anton Harber's "So, For the Record: Behind the Headlines in an Era of State Capture"

So, For the Record: Behind the Headlines in an Era of State Capture by Anton Harber, Jonathan Ball Publishers, 2020. (336 pages.)

On 17 June 1941, Joseph Stalin wrote a note to the USSR’s state security commissar: “Comrade Merkulov. You can tell your ‘source’ from German air force headquarters to go fxxk his mother. This is not a ‘source’ – it’s someone spreading disinformation. J. St.”

Besides the delicious irony of Stalin’s note (Germany invaded the USSR five days after he pooh-poohed this possibility), it occurs to me that, even though Stalin got it badly wrong, there sometimes must be something comforting, even refreshing, to have someone in charge who believes he knows everything (and Stalin surely was an expert in the field of “disinformation”), who brooks no opposition, makes a clear decision quickly, and communicates the decision promptly, forthrightly and succinctly.

This situation did not pertain, however, in the world of local journalism in which Anton Harber immerses himself in his excellent new book, So, For the Record: Behind the Headlines in an Era of State Capture.

On the contrary, what was happening behind the headlines during the years and incidents covered in this book can best be described as the acme of disinformation – a mishmash of competing interests, colliding egos and agendas, sloppy and incompetent (journalistic and state) leaders, crooked and venal but ultimately ineffective string-pullers, bullies, poor decision-making, and much more – with not a Stalin in sight to settle things down.

By way of context, let’s remember that Harber is the Convenor of the Taco Kuiper Awards, which (now) pay R200 000 for the top prize and R100 000 to the runner-up. Additionally, the Taco Kuiper Trust (or Valley Trust) which provides this money, funds other projects at the Wits journalism department in which Harber is an adjunct professor and of which he was the head for many years.

But on 20 March 2019 Harber had to announce that the TK Awards panel was withdrawing the runner-up award given in 2012 to three Sunday Times journalists, Mzilikazi wa Afrika, Stephan Hofstatter and Rob Rose, for the “Cato Manor Shoot to Kill” story, and was asking the journalists to return the award. (Whether this included the actual money is still not clear to me; it also seems that Wa Afrika and Hofstatter refused to return anything at all, pp. 280-82.) The reason for the “request” was that it had become apparent that the veracity of the main story about the Cato Manor “death squad” was, to put it mildly, questionable. 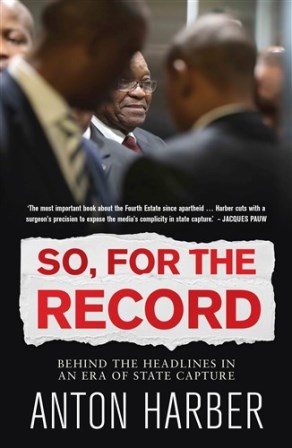 It wouldn’t be untoward to assume, then, that the galvanizing spark for this book was the chagrin that Harber (and the TK funders) must have felt, as well as Harber wanting to protect his own integrity and reputation.

Why not? It’s turned out “well” for the rest of us – because we now have this book to read.

In it, Harber has examined and written about the Cato Manor “death squad” stories and the resultant trashing of the life and career of General Johan Booysen; and the ruinous assault on the SA Revenue Service (SARS) and investigator Johan van Loggerenberg in particular but on others as well.

It also covers the onslaught on senior policemen Anwa Dramat and Shadrack Sibiya regarding alleged “renditions” of Zimbabweans; the remarkable story of the revelation of the emails and other data showing that “President Jacob Zuma wasn’t running the state, the Guptas were”; the role played by the investigative group amaBhungane; and much, much more, including an analysis of present-day SA journalism.

Harber considers not only the broad brush strokes of the effects of the  newspaper stories, both then and longer-term, he also explores the lives and roles of the people involved, and the overall consequences of what journalist Max du Preez called “the worst chapter in the history of South African media since 1994”.

The narrative is not delivered as one might expect (or as I expected). It’s by no means a legalistic, straight-line narrative/analysis – as in, for example, “this is story number one (say, SARS and Van Loggerenberg) and this is what I [Harber] have found out about this story”.

Harber, it seems, wanted – and has given us – a different kind of narrative in which he moves back and forth between the different stories (keeping the chapters short) – as well as interpolating his own experiences as a journalist and editor – to create what Jacob Dlamini calls in a shout-out on the back cover a “thriller”. In the acknowledgements, Harber thanks his colleagues in the “Wits Creative Writing MA class” and I assume that some of his technique, unusual in a non-fiction book, might have been seeded there.

Again, why not? The book is eminently readable and – thinking here of Raymond Chandler, who remarked that when it comes to thriller writing, “pace is everything” – the unflagging pace and informal tone carry the reader right along.

It’s also obvious that Harber was indefatigable in his pursuit of trying to unravel all the material that went into generating, and then in turn flowed from, the massive and destructive “disinformation” that is his subject.

He seems to have interviewed everyone he could reach and if there are those who are absent – I’d have liked to hear more from, say, Ray Hartley, Sunday Times Editor during the Cato Manor articles – I assume this is because they refused to talk.

As far as I can tell, Harber has also played fair with all his interviewees. Perhaps even more than fair. Of course, audi alteram partem, “listen to the other side” or “let the other side be heard as well,” is a basic principle of fundamental justice in most legal systems and in good journalism.

Yet, in connection with some people and those parts of their “stories” that I personally know about, I can’t help feeling that Harber’s allowing them space to be contrite somehow operates to mitigate the destruction they wrought. Maybe I am simply being too unforgiving.

Harber, it should be noted, is also “brave” about himself. He shares a note from Booysen, accidentally copied to Harber. Regarding a phone call he had with Harber in 2018, Booysen wrote (to someone else): “He is very terse. Sounds like one of these lib-tarts [sic] who has difficulty to be answerable to a[n] ex police general and an Afrikaans speaking one nogal”.

When Harber asked Booysen about this, the general said: “Actually, it was meant for someone else. But for your information I mean it and make no apology for it ... You seem to think you are immune to be questioned and hence [are] not answerable to any one ... It is the same arrogance by the journalists that has culminated in this sordid saga.”

Out of the mouths of babes and generals. Perhaps it should have been the epigraph at the front of this book.

At the start of the book, Harber writes: “This book attempts to demonstrate how elusive – and how essential – is the journalistic aspiration to accuracy and fairness. Some of those I’ve criticised for errors and misrepresentation will, I expect, be eager to point out my own. I apologise for these in advance.”

This does take the wind out of one’s sails regarding any quibbles. But I have two, not about errors, but about misrepresentations or more specifically the ease with which one can unthinkingly fall into using the tropes de jour.

On page 11, Harber, discussing the use of a photo in the Cato Manor story of men drinking at a braai shortly after a shooting, writes that “it was an image that would have resonated with [those] who recalled the notorious descriptions of the apartheid killing unit at [Vlakplaas] holding a braai after burning the bodies of their victims”.

Perhaps Harber has forgotten or didn’t know that in November 2007 Eugene de Kock succeeded in the Pretoria High Court in obtaining an interim interdict against Christi van der Westhuizen, author of White Power & the Rise and Fall of the National Party, and the book's publisher, Zebra Press. De Kock’s complaint inter alia was a sentence in the book that read: “Another example would be Eugene de Kock, braaiing and drinking for hours next to a corpse that they had set on fire”.

De Kock claimed this sentence contained blatant lies and was therefore defamatory of him. In the end, De Kock lost the case. Judge Willie Seriti found that De Kock had not disclosed in detail his “criminal history” to the court, that this history was appalling, and that the law of defamation protects good reputations, not bad ones. My point, however, is that De Kock argued – and this was not gainsaid nor has ever been – that at Vlakplaas there were never any braais held next to corpses that had been set on fire.

On page 27, discussing the Sunday Times’ 1994 attempts “to catch up with the massive demographic, political and cultural change happening around it,” Harber writes that it was an “oddity” that the ST would hire a “right-wing [sic] British expat,” David Bullard, as a columnist.

I’d argue that there was no evidence that Bullard was “right-wing” – a damaging and cancel culture epithet if ever there were one; and that Bullard’s modus operandi was to try to be funny/satirical (and mostly to succeed in being so) by being “cynical [about] majority rule and the democratic transition,” which was exactly what the economically influential members of the newspaper’s target market wanted to hear.

Finally, a senior law man, with a particular interest in the SARS saga, happened to write to me yesterday: “My question is what were the journalists up to?  Was it merely a matter of here is a good story so why bother about the facts? Or were they party to an agenda? ... I would also like to know who their ‘source’ was (if they had a source at all).  I firmly believe the spooks were involved, but the coincidence suggests to me that [ex-SARS commissioner Tom] Moyane and his cohorts had a hand.”

This note has reminded me of two things – that amount to one thing. The second half of the book’s sub-title (“in an Era of State Capture”) suggests that this book sheds light on “state capture” and the law man’s questions call my attention to the fact that I haven’t named the bad guys who, one way or another, played the media and were therefore the state capturers.

I’m not going to give away who the different bad guys were – they’re there for you to see if you read this book, which you ought to do. What I will divulge is that most journalists were not party to an agenda – they were played – and that in some cases, but not all, the spooks were involved.

For the most part, however, all the “disinformation” we read about in this book was the result of a hodge-podge of disparate venal people trying to protect their crooked interests.

Certainly, it resulted in many respects in what we call “State Capture” – but State Capture is a “many-splendoured” thing and there was no single éminence grise sitting in a dark room, in front of a winking computer screen, no Stalin.

This is chaotic Seffrica, bru – where the journalists are often confused and books like this can still be written, read, and enjoyed. Make the most of it.