When the ANC took control of the unions

Martin Plaut reviews Jan Theron's "Solidarity Road: the story of a trade union in the ending of apartheid"

Jan Theron – Solidarity Road: the story of a trade union in the ending of apartheid, Fanele, Auckland Park, 2016

Two decades on, the wreckage of the movement that led to the end of apartheid is hard to miss. The ANC: dogged by internal strife, corruption and nepotism. The union movement, centred on COSATU, divided and in decline. Powerful organisations like the United Democratic Front are mere memories. How did such vibrant organisations, mostly led by principled, intelligent men and women end up in this mire of abuse and cronyism?

The roots of this malaise can be traced back a very long way.

In the 1950’s as the National Party juggernaut rolled on and the ANC was fighting for its life, the unions were a critical weapon in the resistance. But in the end the non-racial unions of SACTU became little more than a battering ram to try to halt the apartheid monster. The needs and views of the union members were made subservient to the needs of the Congress Alliance. SACTU unions (controlled by the Communist Party) became what was derisorily termed the ‘labour desk’ of the ANC. After Sharpeville the ANC and the unions were crushed and many of the leadership went into exile.

In 1973 workers took to the streets in what became known as the Durban Strikes. White students, associated with the Wages Commissions, took up their cause. Jan Theron was among them. This book is the story of how he came to lead the Food and Canning Workers Union – the only SACTU union to survive the decimation of the 1960’s. It had been founded by Ray Alexander (‘Miss Ray’ to her members) and she continued to send it guiding missives from exile in Zambia. By the time Theron became general secretary in 1976 it was a ghost of the organisation it had once been. Poorly organised and corrupt, it was on its last legs. It had organised Coloured and black African workers in the industry, but had historically done so in two separate organisations. It had survived by keeping its head down, and concentrating on representing employees in the canning factories around Paarl.

It took a mighty effort for Theron to revive the union. Supported by people like Oscar Mpheta, who had been with the union in its heyday, it was resurrected. Branches gradually spread across the country.[1] Theron tells the story of how this was done with great feeling: always downplaying his own role and that of his ever-patient wife, Athalie, while highlighting the role of the workers who took such risks to rebuild the union.

Yet in the end this is a story of failure.

The key question was whether the fragmented unions should unite into a single umbrella organisation. For complex reasons the Food and Canning Workers had not joined FOSATU when it was founded in 1979. It was partly because FOSATU was sceptical about the ANC’s intentions towards the unions, and wanted to keep their distance.

The critical issue of the political stand the union movement should adopt was spelled out in an address to the FOSATU Congress in 1982 entitled: “The Workers’ struggle: where does FOSATU stand.” This tackled the question head on, making it plain that FOSATU supported the ANC, but on its own terms: it would not become the party’s ‘labour desk’ once more. As one worker put it: “Of course we want Mandela to be Prime Minister, but we must make sure that when he is, workers control him.” 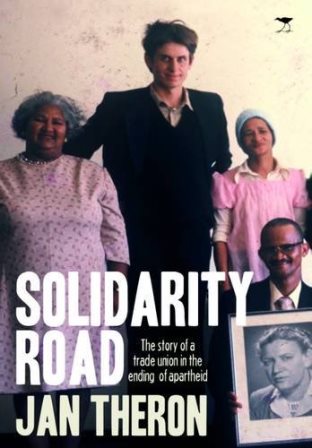 Theron was dismissive of this argument, describing the address as “academic” and accusing FOSATU (which by this time had 100,000 members) of being “politically timid”. It was to prove to be a critical mistake.

Although Theron had joined the ANC in a South London pub during a visit abroad, he gives little indication that he was part of the party’s internal revival during the 1980’s. Unlike other members of his union – including Barbara Hogan – he did not consider himself ‘under discipline’ from Lusaka. Exactly how the ANC and the Communist Party came to re-assert its control of the unions and the community organisations has always been something of a mystery. This book goes some way towards unravelling how it took place.

Theron believed that by relying on his workers he could plough an independent furrow. But as the ANC and Communist Party re-established themselves inside the country they grew in confidence. Soon they brooked no opposition. Theron found himself facing accusations of “providing ammunition for ‘the enemy,’” because he insisted on discussing tensions between unions and ANC aligned community organisations.

Still naively believing he didn’t have to toe a party line, Theron was soon outflanked. He was told to accept external ‘discipline’. He complains about being brought to heel. “I have never understood what is ‘democratic’ about democratic centralism. It seemed to me that once the line had been laid down, those that did not toe the line would be labelled ‘reformist’ or ‘reactionary’, either to bludgeon them into line or put them beyond the pale…Our role, as they conceived it, was simply to rally our members to their line.”

In early 1983 Theron was visited by Trevor Manuel and Cheryl Carolus who instructed him to fall into line with the ANC. The ideal of an independent working class movement was over. By the time the UDF was formed, as Theron notes rather sadly: “We were no longer fashionable.”

Progress towards the formation of COSATU – aligned to the ANC – went on apace. There was a last ditch attempt by Jonny Copelyn, who ran the Southern African Clothing and Textile Workers’ Union, to try to halt the takeover. Copelyn called on the Food and Canning Workers to join FOSATU, rather than COSATU. But Theron was having none of it, describing the suggestion as “outrageous.” It was the final chance to resist the takeover, yet it was thrown away. Although this was just what the ANC and Communist Party wanted Theron soon found himself marginalised. He was just too independent a spirit; too questioning of party dictats to be acceptable.

That the unions had to play their role in defeating apartheid is not in question. It was always the terms of the engagement that were in doubt. But Theron, and those ‘workerists’ who called for an independent line, came up against the inflexible dogmatism of the Communist Party. Theron met Ray Alexander during a visit to Lusaka. She was, as he acknowledges, a party member, and despite being out of touch, had done all she could to enforce the party’s dogma.

It is this subservience to the ANC and Communist Party that has been the undoing of COSATU. Dragged into an alliance over which they have only limited control, the unions provide voting fodder for the ANC during elections, and in return their leadership enjoy the privileges of power. At the same time it has left key state functions – including education and health care – in the hands of the union bosses. It is a noxious relationship which has undermined the state and left the unions weak and divided.

A fresh resurrection will be required if they are to be rebuilt on a more solid foundation.

CIA assessments of the South African transition – how accurate were they?