Where did the DA go wrong?

RW Johnson says the official opposition is in a mess

There is no doubt that the DA is in a considerable mess. Everywhere one goes, especially in the Western Cape, one hears expressions of anger against the party with many vowing not to vote for it again. The DA is blamed for the crisis over water, for the divisions which have cost it control of Cape Town and for the revelation that the administration of that city – the jewel in the DA’s crown – may have been a great deal less good than the party was wont to boast. On top of that there is a pervasive feeling that Maimane is a weak leader who has made little impact. This was all true quite independently even before President Cyril Ramaphosa’s highly successful charm offensive.

The DA’s defence would doubtless be that it has to tread very carefully – and thus slowly – with the matter of De Lille in order to be fair to her and to ensure that there is no repeat of the Peter Marais affair, when an expelled DA mayor hung on, did a deal with the National Party and the ANC and removed the city from the DA’s grasp. Secondly, it points out that under the Constitution water is a national competence and that the Department of Water and Sanitation in Pretoria is really responsible for Cape Town’s water shortage, not the DA. And it would add that Maimane is still a young, new leader who is in the process of establishing himself and that while Ramaphosa may be popular now, this is unlikely to last.

There is doubtless some truth in this defence but there is no doubting the public disillusionment with the party, which is to say that at the very least the party has been very ineffectual in putting its case to the public. There is, however, a great deal more to it than that.

First, the party took a considerable risk in May 2015 when it chose Mmusi Maimane as leader. If one looks back over the leadership of the Progressive Party, the DP and DA, it has been an impressive array – Jan Steytler, Helen Suzman, Colin Eglin, Van Zyl Slabbert, Zach de Beer, Tony Leon and Helen Zille. These were, quite simply, the best that liberal white South Africa had to offer. They were all chosen on merit and the general calibre was high. It was thus a major departure when the party chose Maimane as its leader. He was not quite 35 and he had served as parliamentary leader of the party for a year, following a stint on the Johannesburg City Council and thus had little national or parliamentary experience. In addition, he was a pastor in the deeply conservative Liberty Church and did not believe in evolution. It is difficult not to conclude that he was set up to fail for the chances of anyone so young and inexperienced making a success of the job were virtually zero. At the very least he needed another ten years on the DA front bench, shadowing a ministry, and learning the nuts and bolts of national politics before even being considered for the leadership.

The results are what might have been expected. Maimane wanders around the country giving speeches, which he does rather well. He does not consult with his front bench nor does he attempt to co-ordinate them into a team. Because he is so inexperienced he has to rely heavily on the DA’s federal executive and on the non-elected officials of the party who have, accordingly, achieved an unusual prominence. The party is thus effectively rudderless. Given that Maimane enthusiastically endorses both affirmative action and black economic empowerment, there is now a widespread feeling that the DA is merely an ANC-lite. Strikingly, what it does not have is an alternative set of policies which set out a distinctive (liberal) vision of how society should be. This is something which it used to have but which has been lost. It is possible to meet young DA MPs who no longer know what they’re supposed to believe in. In effect the party seems merely to promise to carry out ANC policies but without corruption. 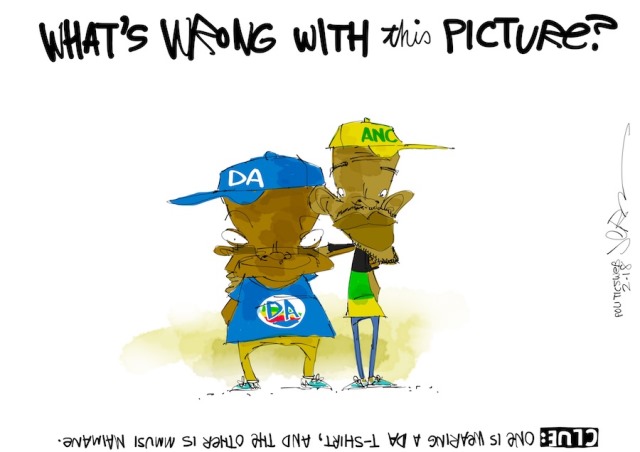 These difficulties have been compounded by the party’s decision to crush Helen Zille, by far their most effective fund-raiser and most popular figure. While Zille’s tweeting has always been a problem, it was absurd and unjust to punish her so heavily simply because she enunciated the perfectly unexceptional view that colonialism could have had some benefits. No Indian, American, Australian or Canadian would quarrel with that. It was, of course, a debatable view but the right thing for Maimane to do when asked to comment on it would have been just to kick it into touch – e.g. say that he didn’t agree but looked forward to discussing the matter with Zille. As it was he interpreted it in a parochially South African way (colonialism = apartheid), betraying an adherence to the ANC’s theory of “colonialism of a special type”, and denounced Zille - on air. After that there was no going back. This was pure naiveté and inexperience.

This was, moreover, something which the DA could simply not afford. Poll data is sparse but in February 2016 the magazine Business Tech carried the results of a poll in which respondents were asked how they would vote in 2019. 78% said they would vote ANC if Ramaphosa was its leader (compared to 62% for the ANC in the last election). The DA fell to 8% from its 22% score in 2014 and the EFF stayed steady at 7%. These findings – and they were doubtless echoed by the DA’s own polls – were a warning: the DA must not rely on just attacking a person (Zuma) but needed to offer a strong programmatic alternative to the ANC. The warning was not heeded.

Then came the mess in Cape Town. The DA only began moves to investigate and perhaps dethrone De Lille when first, mayoral committee member J.P. Smith, and then her executive director, Craig Kesson, brought serious charges against her in late 2017. But anyone who follows politics in the Mother City knows that dissatisfaction with De Lille had been building for a long time before that. Everywhere one heard complaints about the way property developers seemed to have taken over the city and were building tasteless and unwanted new developments.

Rightly or wrongly, this was often imputed to corruption. One also heard stories of how dictatorial and authoritarian De Lille was, how she ran a virtual party-within-a-party of her old Independent Democrat confidantes inside the DA, how she had centralized almost all power in her own hands and how she interfered in appointments in order to push in candidates who would never have been chosen on merit. There were, in other words, quite sufficient grounds for the party to have nominated a different candidate for mayor in 2016. That would have been the clean and easy way to change the guard.

Undoubtedly, all levels of government had failed to take seriously enough the repeated warnings of a possible water crisis. When the current drought became worse De Lille, in line with her I-control-everything attitude, immediately assumed responsibility for the crisis, began to berate users to use less water - and then introduced a scheme to punish even those who had done just that. She doggedly kept insisting that “a well run city doesn’t run out of water” - a major political mistake, for the city should have been suing the Minister of DWAS for failing to provide the bulk water supply to Cape Town - which the Constitution requires. As it was, De Lille’s rhetoric reinforced the Minister’s attempt to throw responsibility back onto Cape Town. Clearly, this has succeeded for the public are now blaming the DA for the water crisis. The DA leadership clearly should have intervened far earlier to reverse this situation.

These mistakes were then compounded when Ramaphosa was elected. Instead of embracing the great wave of relief and optimism which swept the country, the DA tried to attack Ramaphosa as just another Zuma accomplice. This was a classic piece of wrong positioning which could only alienate the party from its own supporters and make no impact whatsoever on the ANC.

All of which goes to show that modern politics requires a quick, agile mind, shrewd intelligence and a sure reading of the public mood. The margin between success and failure can be quite narrow. In the DA’s case the weak leadership has made the party directionless, which explains the repeated failures above to respond to emerging situations in time. Currently it is bargaining with De Lille, trying to get her to resign as mayor of Cape Town by offering her a parliamentary seat. This is simply incoherent: how can one accuse someone of corruption, maladministration and bribe-taking – and simultaneously offer them a seat in Parliament? Each gesture undermines the other.

The DA has so lost direction that it has even failed to rise to the ultimate challenge, the abrogation of the Constitution to abolish property rights with the enshrining of expropriation without compensation. This was the moment when the DA needed to hold Ramaphosa to account for destroying the whole basis of the post-1994 settlement. For this is the road to Zimbabwe, to an investment strike without end, to the complete despair of the minorities, and to the loss of food security. This motion is nothing less than a motion for national suicide.

In effect this measure says that those who founded Orania were right and the rest of us gullible fools, for the Oranians said that they could not trust any mere constitution and that only having their own territory would do. This now appears to be was clearly right, for only that will provide security. One result of this motion could well be the rise of territorial separatism in the Western Cape and elsewhere. All the assurances that Roelf Meyer and F.W. de Klerk gave to the white population are now exposed as false. This is indeed an epochal moment when the DA really needed to stand up – and didn’t. The party has simply become ineffectual.

The DA has got into this mess by playing identity politics. In the age of the Progressive Party, the party knew what it was: merit, not colour, a slogan it stuck to through thick and thin and which it practised itself in its choice of MPs and leaders. At first, in the new age of universal suffrage, it continued in the same fashion, which succeeded in making it the official Opposition. Thereafter further growth depended on wooing first the other minorities and then Africans. Fatally, this led it down the path of identity politics – appointing people who were clearly unsuitable like Peter Marais or Mamphela Ramphele, simply because of their racial identity, or over-promoting promising youngsters like Lindiwe Mazibuko or Mmusi Maimane. Inevitably, this led to racial politicking even within the DA and to the discarding of the precious, nay indispensable stress on merit. One cannot but think that the party would have done better to stick to first principles – and to return to them now.

The conundrum of inequality in SA

The DA and De Lille

Ramaphosa and the strange workings of ANC democracy