Let's look before we leap

Transforming the economy through nationalization – an idea whose time has come?

According to many young South African intellectuals and politicians - including EFF leader Julius Malema and his fellow travelers - the great betrayal of the Mandela and Mbeki presidencies was the failure to radically transform the economy after 1994 through nationalization combined with economic transformation; or what could be called “transformative nationalization”.

The argument is made that if only the post-1994 ANC government had held true to its historic ideological commitments and pursued these bold policies the country would not be in its current malaise; with millions of black South Africans still stuck in poverty and transformation occurring too slowly for many.

What the adherents of this view generally fail to mention is that the revolutionary path, of which they are such strong proponents, was actually followed by a number of other African countries post-independence. In assessing Nelson Mandela and Thabo Mbeki’s decision to divert from it, it is illuminating to examine the experience of those nations.

The impact of transformative nationalization can be seen in the chart below. The bold line shows average incomes in the countries that implemented transformative nationalization in the years before and after the policy was implemented. As can be seen in the chart after two decades income levels were half of what they would have been had pre-nationalization trends continued. These bold policies lead to collapsing wage rates, spiraling poverty, and falling government tax revenues.

Subsequently, spending on health, education and pensions fell and to balance the government’s books these countries became increasingly dependent on foreign donors, and multilaterals for money and expertise. There is no indicator of looming disaster in the period prior to transformative nationalization. These countries were growing – sometimes quickly, sometimes slowly - but they were growing. Afterwards they all went into steep declines that they did not recover from for twenty years.

Graph 1: Nationalization has led to decades of lower incomes: GDP per capita in constant US$ indexed to the year in which nationalization occurred

The effects then of implementing bold transformative nationalization policies were in the short term on a par with those of the Great Depression, the United States’ great economic trauma of the last century. Just as with the Great Depression incomes quickly fell by around 20 percent in the first few years. However, in the US within ten years incomes had recovered to pre-depression levels and soon exceeded them. A similar story can be seen for Germany. Initially the destruction to people and infrastructure from the war had a greater effect than transformative nationalization. But recovery was relatively swift, and within 20 years Germany had far higher incomes than before the war.

Graph 2: The effects of nationalization have been far greater than war or depression: GDP per capita in constant US$s indexed to the years of depression (US) and war (Germany) 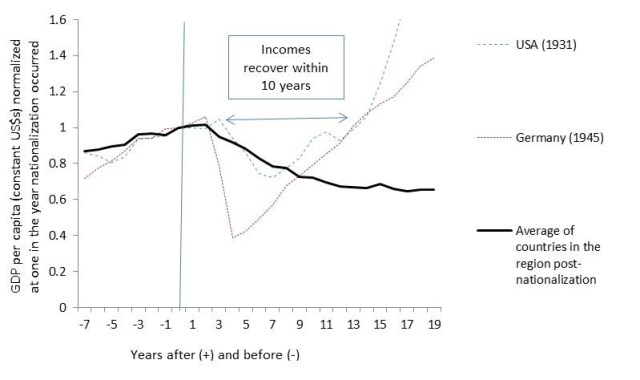 Outside the region the effects of nationalization have been far less dire. For the countries shown below from Europe and Latin America it’s not even clear that their economies grew much slower after nationalization policies were implemented. This markedly less severe effect is probably because nationalization in these countries was more limited, targeting a smaller share of the economy and with far more limited objectives.

In these countries’ nationalization was largely aimed at transferring the ownership of companies from the private sector to the state without large scale change of management and staff. In contrast transformative nationalization links the transfer of ownership to the removal of “foreigners”, “outsiders” or otherwise unwanted ethnic groups from employment, management and other positions of “economic power”. The expulsion of such groups from the economy tends to go hand-in-hand with their permanent exodus from the country.

This included South Asians in Uganda, foreign investors in Zambia, white farmers in Zimbabwe, and the Portuguese in Mozambique. Removing “the unwanted” in this way led to a loss of skills, experience and organizational capacity that was difficult to replace. Economists estimate that more than three quarters of economic growth is caused by “technology” with the rest being caused by labour or capital.

This suggests an explanation for the destruction wrought by transformative nationalization. The loss of technology from deliberately pushing unwanted people out of the economy was far more difficult to recover from than a war (in the case of Germany) or a financial and monetary crisis (the Great Depression). 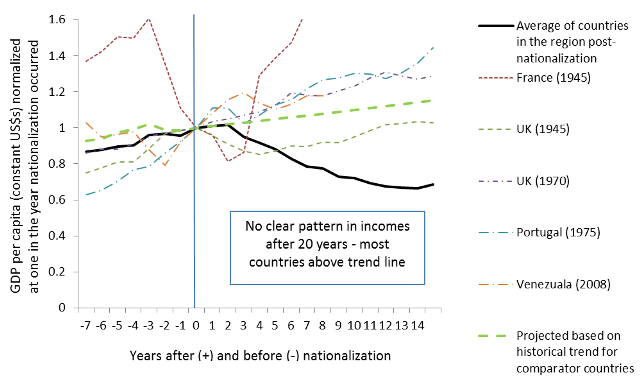 You don’t need to destroy the economy to transform it

The most successful economies in Sub-Saharan Africa (Botswana and Mauritius) are also the most transformed and they are notable for the absence of nationalization, and their market friendly slowly- but-surely approach to transformation.

From lower levels of income (in the case of Botswana) these economies are now ten times wealthier than the countries that chose the bolder path of nationalization and strong-armed transformation. These countries are now wealthier than South Africa even though both were far poorer just thirty years ago.

It is also clear that with higher incomes has come far greater transformation in all positive senses of the word. Mauritius and Botswana’s rapidly growing economies have allowed for high levels of spending on education and health, dramatically higher levels of skills and education, and a deep seated successful transformation of government and industry.

The comparative experience thus suggests that this is the path South Africa should be following – rather than the bold and quick fix of instant transformation that nationalization promises, but so disastrously fails to actually deliver.

Graph 4: Countries that did not engage in nationalization were far more successful: GDP per capital in constant US$ for Mauritius and Botswana (neither nationalized), average for countries in the region that nationalized, and South Africa as a comparator 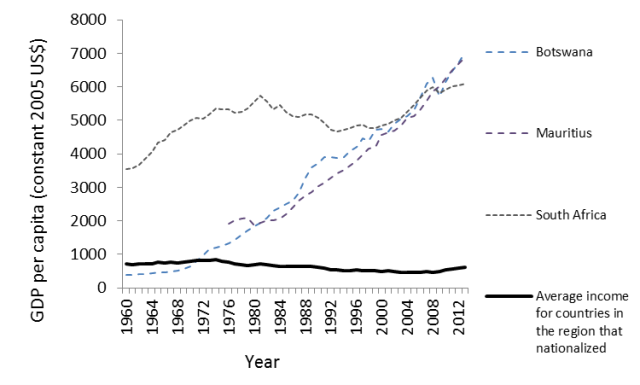 Finally, a solution to the land question?

The Daily Maverick, FW de Klerk and the TRC