Zupta’s nuclear deal: Either we end it or it ends us

Zupta’s nuclear deal: either we end it or it ends us

Jacob Zuma’s nuclear deal will be disastrous for South Africa. It will literally bankrupt us, diverting billions of rands from poverty reduction projects, while producing a nuclear white elephant in two decades’ time. But it will make a lot of money for Zuma, the Guptas and ANC cronies in the short-term and they will be long gone by the time we feel the real pain.

In Parliament last week, Energy Minister Tina Joemat-Pettersson confirmed that government is going ahead with the nuclear procurement process and Public Enterprises Minister Lynne Brown confirmed that information on the process will not be made public. In other words: “We’re going to tie you into far more debt that you can ever repay, but this is none of your business.”

This morning, a DA-assisted Mail and Guardian investigation has revealed the first concrete signs of corruption associated with the nuclear deal. A R171 million contract for the “Nuclear New Build Programme Management System” has been issued, potentially irregularly, to the son of Vivian Reddy, a close friend and ally of President Jacob Zuma.

South Africans should be deeply concerned about the government’s nuclear project. Let’s be clear. It is in no way motivated by a genuine desire to secure South Africa’s energy future in the most cost effective and sustainable way. Rather, this huge project is going ahead because Zuma, the Guptas and other ANC elites stand to make millions in bribes and tenders.

Like the Arms Deal, Nkandla and the President’s new jet, there is no intention to use state resources judiciously in order to derive the maximum public benefit. And like these ill-conceived projects, the nuclear deal will have the ultimate effect of stealing from all of us, but particularly the poor, in order to enrich a small group of connected ANC cadres.

The DA will do everything in our power to stop this deal, because the stakes could not be higher, nor the plan more foolish.

For one thing, we simply will not need 9.6 Gigawatts of new nuclear energy in 2030. We currently have a generation capacity of 42 Gigawatts and are expecting an additional 11 Gigawatts from the Medupi, Kusile and Ingula projects in the early 2020s, which will offset the decommissioning of most of SA’s coal-fired power stations in the mid-2020s. Our current needs range from 28 to 33 Gigawatts.

Electricity demand will remain low for as long as SA’s Zuma-inflicted economic woes persist. Thereafter, cheap electricity will be fundamental to reindustrializing South Africa’s economy and growing jobs. To achieve this, we need a stable, consistent and relatively affordable form of electricity generation. Alternative electricity generation technologies such as gas are far better able to satisfy these requirements. This position is supported by the National Development Plan, which the government is supposed to be implementing.

One could argue that our demand may increase massively by 2030, requiring an additional 9.6 Gigawatts of energy. But that is highly unlikely given two key trends: new technologies are increasingly energy efficient, and power production is becoming cheaper and increasingly decentralized: more and more households and businesses are opting to generate their own energy, and using it more efficiently.

Thus, while SA’s energy needs were projected to grow significantly in the past 6 years, they in fact decreased, as shown in this graph from the report on electricity generation costs, released this week by the Parliamentary Budget Office. 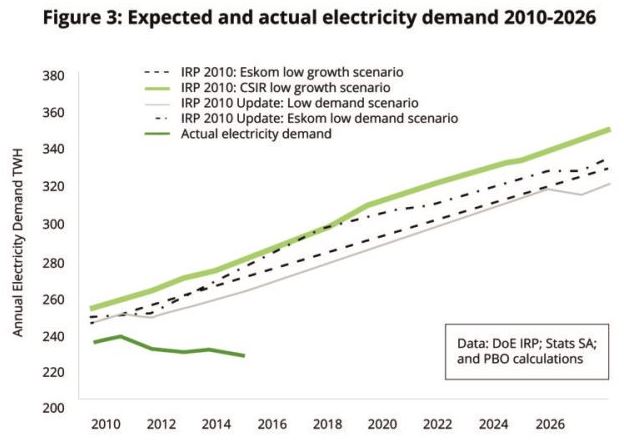 But even if we did need another 9.6 Gigawatts of new energy in 2030, it would not be new nuclear energy, since new energy from wind, hydro, gas or coal are far cheaper, less risky and more flexible options, as confirmed by the same report. Flexibility is essential, given how rapidly energy production and storage technologies are developing around the world. Committing to 9.6 Gigawatts of new nuclear energy for 2030 is tantamount to ordering millions of today’s computers at today’s prices, to be delivered in 2030.

Germany and Scotland have responded to these trends by cancelling nuclear build programmes while the US and Sweden have taken reactors offline. England, which yesterday opted to go ahead with its nuclear build after putting it on hold for precisely these reasons, is locking itself into prices that are more than double those of other power sources, and will quite possibly end up with a white elephant.

But even if we did need another 9.6 Gigawatts and even if nuclear was the cheapest option, we simply cannot afford it. Even if the project comes in on budget, it will cost us R1 trillion rand in today’s terms (equivalent to SA’s entire annual tax revenue), to be repaid over twenty years. That means we’d have to repay about R100 billion per year, or R274 million per day, for the next 20 years.

All indications are that this deal is already done with Rosatom, Russia’s state-owned energy company, whose projects, like Eskom’s, are notorious for being over-time and over-budget. So these are conservative estimates. Nor do they take into account the effect that a ratings downgrade would have on our debt servicing costs.

In forging ahead with this ill-conceived plan, our hapless government is locking SA into an over-priced, outdated technology within Eskom’s monopoly, while blocking the development of renewables which are dynamic, increasingly cost-effective and more job-creating. It is no coincidence that Eskom is refusing to sign any new contracts with independent power producers.

Possibly, the government reckons it can prolong Eskom’s lifespan, which is limited given the strong trend to decentralized production. And yet ironically, the more foolhardy and wasteful the decision-making by Eskom and the government, and the faster power prices thus rise, the quicker richer households and businesses will move off the grid. This will hasten Eskom’s demise and reduce cross-subsidisation opportunities for municipalities, hurting poorer households who’ll be left with ever spiralling prices.

If there is any extent to which this project has been genuinely conceived in order to best satisfy our future energy requirements, it is greatly derailed by the fact that energy policy and implementation are situated in two separate ministries, which inevitably leads to incoherent planning. It is furthermore stymied by a complete absence of a transparent cost-benefit analysis.

What can we do to stop this nuclear project from going ahead in its current form? The DA is going to use every legal and procedural channel available to us to delay or defeat it. But the most effective way to put an immediate stop to it and to avoid any future such projects is to vote the ANC out of government in 2019. It is time to pull the plug on the ANC’s corruption. The power is yours.

This article by Mmusi Maimane first appeared in Bokamoso, the online newsletter of the leader of the Democratic Alliance.

Was Minister in the dark about nuclear contract set to benefit Zuma Inc? - Gordon Mackay

Lesson One from the Zuma riots: You’re on your own, baby!

The ultimate license to loot