63% of WCape residents think their provincial govt doing well, compared to 34% in ECape

According to the latest poll by opinion and market research company, Ipsos, just over half of adult South Africans (52%) indicated that, in their view, the national government was performing "well"[1].  Four provinces, namely the Western Cape, North West, Mpumalanga and the Free State outperformed the national government when their performances were evaluated.[2]

This is an important finding from the Ipsos "Pulse of the People" poll of 3,446 adult South Africans. Fieldwork was conducted between 26 October and 7 December 2012. In the poll, randomly selected respondents were asked how they evaluated the performance of various institutions and officials. The results are representative of the views of South Africans of voting age, i.e. 18 years and older.

Rating of the performance of the national government has dropped significantly since May 2012 when the previous evaluation was undertaken. "In May this stood at 61% which shows a marked decrease in public confidence that our government was doing a decent job in the latter part of the year" comments Mari Harris, public affairs director and political analyst at Ipsos.[3]

Performance of the provincial structures and premiers 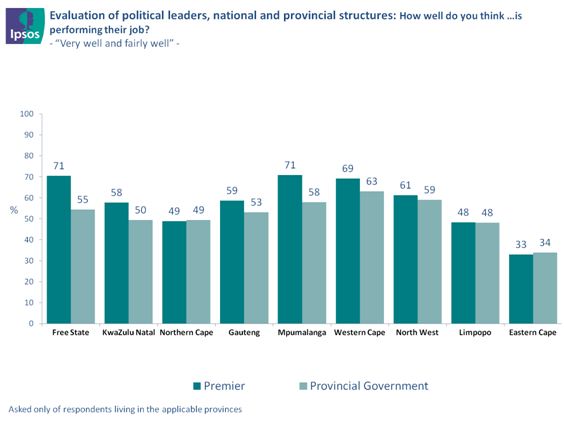 Both Limpopo and the Eastern Cape experienced problems in 2012, with different departments being placed under administration from the national government. It is clear from the ratings of the premiers and the provincial governments that more attention should  be focused on these two provinces.  Two other provincial governments, the Northern Cape and KwaZulu-Natal also need to improve their performance as only half of the citizens in these provinces think they are doing their jobs well.

As the performance and efficiency of a provincial government seems to be rely heavily on the leadership and performance of the premiers, it is important to look in more detail at the evaluation of the premiers' performance. The graph below summarises the proportions of voters in each province who thought that the premiers were doing well or were not doing well.  It is clear that the three most effective premiers, David Mabuza, Ace Magashule and Helen Zille receive negative feedback from less than three in every ten in their provinces - regardless of the political party supported by these voters. 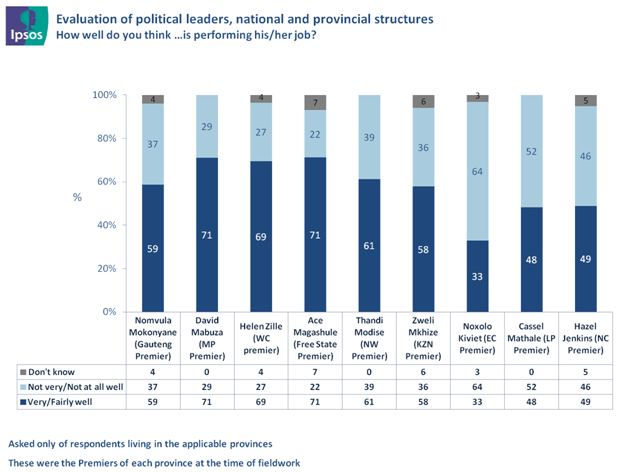 Ipsos is an independent market research company controlled and managed by research professionals. Founded in France in 1975, Ipsos has grown into a worldwide research group with a strong presence in all key markets. In October 2011 Ipsos completed the acquisition of Synovate. The combination forms the world's third largest market research company.

Ipsos researchers assess market potential and interpret market trends. They develop and build brands. They help clients build long-term relationships with their customers. They test advertising and study audience responses to various media and they measure public opinion around the globe.

[1]Respondents had to indicate their opinions on a scale of "very well", "fairly well", "not really well" or "not at all well".

[2] Gauteng is essentially at the same level as the national government i.t.o. performance.

52% of ANC supporters say future of party is uncertain - Ipsos

Half SA's women believe their children's future is bright - Ipsos