On Tuesday 15 February 2011, a delegation of Right2Know Campaign supporters attended a sitting of the Parliamentary Committee handling the Protection of Information Bill where the Minister of State Security was expected to make an appearance. As members of the opposition parties staged a walk-out of the sitting (alleging that the Committee did not have a Parliamentary mandate to sit), supporters of the Right2Know Campaign covered there their faces with masks depicting the Minister Cwele and held up placards reading: Cwele, Minister of Secrets!

Remaining ANC members of the Committee took great offense to this silent and non-disruptive protest. They alleged that R2K supporters had broken the law and requested the Committee Chairperson, Cecil Burgess, to launch an official investigation into the incident.

The Right2Know campaign believes that the public should have a right to express themselves in Parliament in a manner that does not disrupt the ability of MPs to conduct their business.  In this spirit we have been protesting inside the Committee for the past months with our campaign t-shirts and taped mouths - indeed, by our very presence. It is not clear why certain ANC members of the Committee have now decided to explore legal action to limit the R2K Campaign's free expression.

We are convinced that our presence in the Committee meetings, as well as ongoing work to educate and organise in our communities, is having an impact as more and more South Africans join our efforts to defend democracy and advance the right to know. 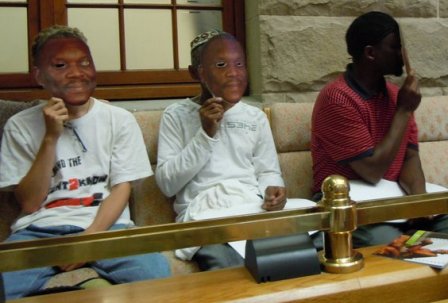 MPs must get serious about fixing Secrecy Bill - Right2Know