South African citizens could face penalties of up to ten years in prison, or a R10 million fine, for issuing any information that may be construed as a "severe weather or pollution-related warning" without written permission from the Weather Service.

This amendment, among others, is contained in a Bill before Parliament that seeks to amend the South African Weather Service Act (see here - PDF).

The proposed Bill creates an offenses section for the first time, which also includes a prohibition on any person supplying false or misleading information about the Weather Service or who intentionally or negligently commits any act which detrimentally affects the organisation.

These proposed amendments are draconian, and an attempt by the Minister of Water and Environmental Affairs, the sponsor of the Bill, to establish and protect an unfair monopoly on services offered by the Weather Service, some of which are commercial services.

Interestingly, the amendment Bill includes for the first time a limitation of liability whereby the Weather Service cannot be held liable for any damage, loss or injury caused by any act committed in good faith. So, while the Weather Service wants protection for performing the imperfect science of weather predicting, it wants to close down other entities that dabble in the same field.

The Bill, if passed in its current form, will have various undesirable consequences, and will make South Africans less safe. The Bill, for example, does not contain a definition of a "severe weather event". But we do know from climate change scientists that "extreme" weather events such as floods and tornados are likely to increase in frequency in the future. So, the need for warning systems to protect people and property is important.

But the nature of such weather events, whether one calls them severe or extreme, is that they strike quickly. They can also be highly localised, that is, striking in a small area. There is no reason to believe that the Weather Service, with its limited ability to measure and observe weather changes all around South Africa in real time, can respond quickly to all severe weather events, offering affected people sufficient warning. The prospect of a citizen who, for example, observes that a tornado is about to strike a settlement and wishes to issue a warning, actually receiving written permission in time from the clumsy bureaucracy that is the Weather Service, is highly unlikely, if not impossible. Thus the Bill will make criminals of civic-minded people and organisations who offer warnings to their fellow citizens, as they will be unlikely even to seek permission to sound the warning. The proposed amendment is simply stupid law.

There are many informal networks of citizens around our country that observe weather changes, and offer commentary or advice on what they see or measure. They offer useful services that supplement the work of the Weather Service. Many users of weather data might even regard them as more useful than the Weather Service.

The prohibition on making pollution-related warnings without official consent is also absurd. The NGOs that work in highly polluted communities such as the South Durban basin, Secunda and Sasolburg perform excellent work monitoring pollution that supplements the work of the state. They also hold the state accountable for compliance action when pollution events from big polluters such as refineries occur, and warn affected people to take precautions to prevent exposure. Why should they seek permission from the Weather Service to make a warning? What if the Weather Service colluded with a polluter to prevent a warning so that a polluter could escape liability? Granted, people or networks that make weather or pollution-related warnings could get their predictions wrong. But what if they are right and the effect of their warning is to save lives?

The Bill also gives courts the power to assess whether any person convicted of one the new offenses gained a material advantage from doing so, and if so, courts may order the award of damages or compensation. Perhaps the Weather Service sees this as a potential new income stream for itself.

It is no secret that since the formation of the Weather Service, just under a decade ago, the entity has struggled to generate increased income from the commercial services it offers. It now turns to Parliament to give it a monopoly over these services. If implemented, these amendments would offer the Weather Service no incentive to innovate and deliver attractive new products. If the Weather Service wants to succeed in a fast-paced economy, where improved communication is empowering more citizens every day, then it must develop the ability to adapt and must display its worth. The proposed Bill will crush creativity and innovation for these other networks of people that offer services in the weather field, and without the competition, the Weather Service will become moribund.

The offenses clause in the Bill needs to be removed.

Public hearings on the amendment Bill are due to be held in the coming weeks.

The offending section of the amendment bill: 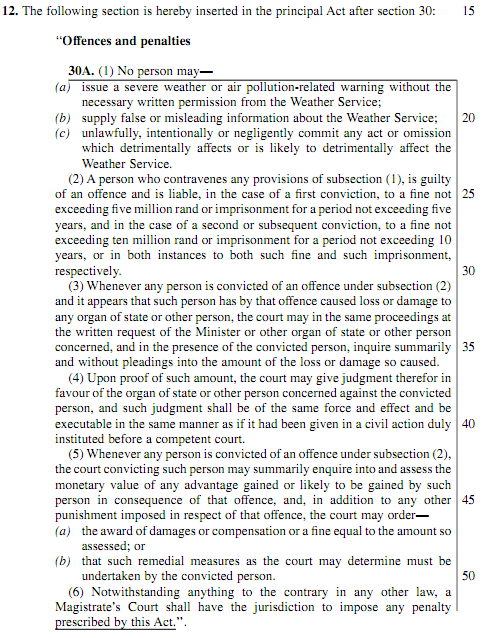