The DA has in its possession a document indicating that SABC Chairperson Ellen Tshabalala has extended COO Hlaudi Motsoeneng's power to act as SABC CEO until the end of December.

This decision is obviously irrational. The courts have ordered that Motsoeneng should be suspended and disciplined for the Public Protector's various findings of fraud and mismanagement against him. Instead, Tshabalala has given Motsoeneng total control of the administration of the SABC, including budgets and senior appointments.

It is particularly problematic given that the SABC is busy recruiting a number of senior executives including Head of News, Head of Sport and Head of Stakeholder Relations. The Public Protector found that Motsoeneng had a history of favouring allies and purging opponents at the SABC. We expect that he will now use his authority as CEO to appoint his loyalists to these key positions.

It is also alarming that, as Acting CEO, Motsoeneng is now the Editor-in-Chief of the SABC. In other words, a man who believes that journalists should be licensed, and that there should be a 70% "good news" quota, now has the absolute power to make editorial decisions at our public broadcaster.

This delegation of authority to Motsoeneng adds further weight to the Communications Portfolio Committee recommendation that Ellen Tshabalala should be suspended pending the outcome of her own fraud Inquiry. She is clearly unable to make rational decisions in the public interest at this juncture.

The bottom line is that neither Tshabalala nor Motsoeneng should be in office making decisions that affect the future of the SABC.

The DA calls on President Zuma to immediately act on the Portfolio Committee's recommendation to suspend Ellen Tshabalala. We need to break this unholy alliance between Tshabalala and Motsoeneng without delay. 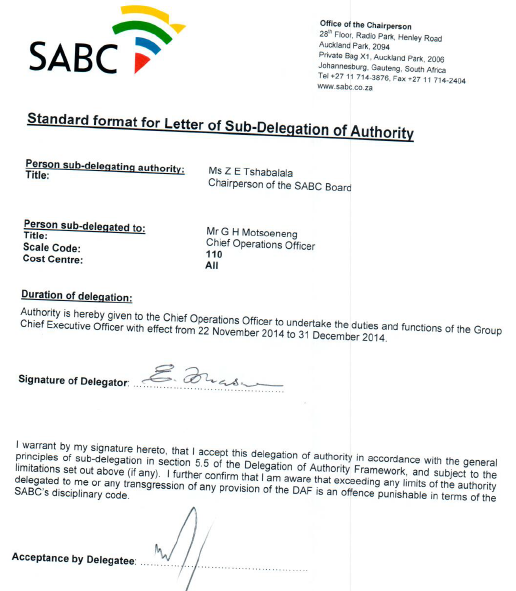