A significant number of South African anti-Apartheid activists, church leaders, government officials, trade unions, political parties as well as civil society organisations have expressed their support for the Palestine freedom fighter and icon Leila Khaled's forthcoming visit to South Africa (6-16 February 2015). Leila Khaled has been to South Africa on multiple visits in the past, this visit is hosted by the South African Palestine solidarity and human rights organization BDS South Africa.

The Israeli lobby in South Africa, including the SA Jewish Board of Deputies (SAJBD), have - not unexpectedly - been trying to discredit Leila Khaled's forthcoming tour. We do not expect pro-Israeli supporters to understand the reason for hosting someone like Nelson Mandela, the South African struggle icon and former Commander in Chief of the MK, or Leila Khaled, the Palestinian struggle icon.

We remind them that Nelson Mandela and South Africa's ruling party, the ANC, both remained on the USA terrorism watch list until as recently as 2008. While the South African Jewish community produced many distinguished anti-apartheid struggle heroes such as Cde. Joe Slovo, they were disowned by the leadership of that community, including the SA Jewish Board of Deputies, which preferred to be in bed with the Apartheid regime.

Mandela, it is worth mentioning, went to prison for being a member of the armed wing of the ANC, the MK, and for being part of a movement (the ANC) wanting to defeat Apartheid.

If for example, the Swedes, invited Nelson Mandela, the First Commander in Chief of the armed wing of the ANC (the Umkonto we Sizwe, (MK)), or Joe Slovo, its subsequent leader and a major Jewish anti-Apartheid icon, to a fundraising event would that have meant that the Swedes were promoting violence? This is what the Israeli lobby is suggesting BDS South Africa has done by inviting the Palestinian struggle icon Leila Khaled to our country.

Numerous organizations across the globe, including those deeply committed to non-violence, invited Nelson Mandela when he was released in 1990 (and still advocating armed resistance to apartheid) to fundraising and other events. Mandela, we daresay, like Khaled was a controversial person but still remained (and remains) a South African struggle icon - worthy while he was alive to being invited to fundraising events. BDS South Africa is inviting a Palestinian struggle icon and freedom fighter to South Africa - someone whom Nelson Mandela rejoiced in meeting and hosted in his home. See photo below of Leila Khaled and Nelson Mandela.

Leila Khaled's forthcoming tour to South Africa is being organised solely by BDS South Africa and our local partners and not by the larger BDS Movement. BDS is a human rights movement that is by definition non-violent. The BDS movement adheres to international law, which gives people under foreign occupation the right to resist it by all legitimate means, including armed resistance (targeting combatants and military targets).

BDS South Africa is part of the international non-violent BDS boycott campaign against Israel. We are opposed to all forms of racism including Zionism and anti-Semitism. 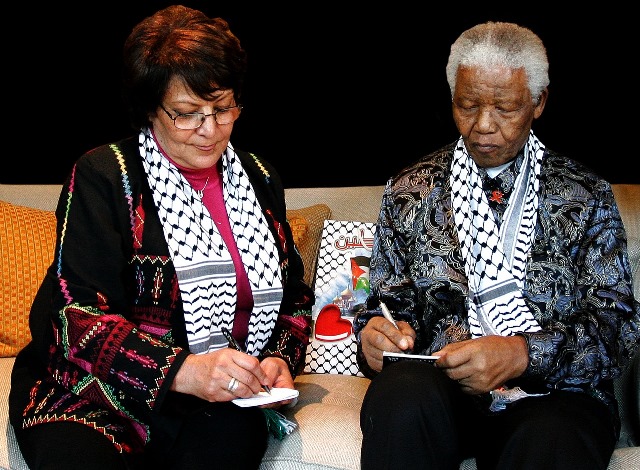 Will Leila Khaled condemn use of terror? - SAJBD