South African Airways (SAA) declared in a lawyer's letter sent to trade union, Solidarity, that it would lift its ban on the applications of white, male students for its controversial cadet programme. This comes within hours after Solidarity instituted legal action against SAA on behalf of three young white applicants. Solidarity on Friday also launched an extensive public protest campaign against SAA.

Solidarity's action followed when it became known that the applications of white applicants for SAA's cadet programme were immediately being rejected on the airline's website, while those of black applicants with the same profile were accepted.

"This total ban on the appointment of whites goes against the letter and spirit of the South African Constitution," Dirk Hermann, Solidarity's Deputy General Secretary said.

In order to avert Solidarity's court action, SAA informed the trade union in writing that the closing date for applications for the cadet programme was postponed to the end of August, and that the application form on its website was adapted, giving white men also the opportunity to apply.

In its lawyer's letter, Solidarity demanded that SAA abolish its quota system for cadets with immediate effect, and that the application process be re-opened. Meanwhile, members of the public were asked to send protest messages to SAA CEO, Siza Mzimela, and to Cheryl Carolus, SAA Board Chair via Solidarity's protest web page, www.stopkwotas.co.za, as part of a public campaign against SAA.

According to Hermann, the success of the Stop SAA campaign shows that South Africans can let their voices be heard in an effective way.

In this case, Solidarity acted on behalf of Pierre de Klerk (19), Armand Moolman (21) and Jan-Paul Nel (20), all of whom applied for the programme but were rejected based on the colour of their skin. According to Hermann, De Klerk, Moolman and Nel met all the requirements for the programme, but their applications were instantly rejected simply because they are white. "De Klerk passed matric with a B symbol for maths and science at higher grade, and an A symbol for English at higher grade. Moolman and Nel too, meet all the requirements and already have private pilots' licences (PPLs)."

Within minutes of submitting their applications, the three of them all received a letter advising them that their applications were "regrettably" unsuccessful. The letter furthermore states that they should not feel discouraged to apply for future positions in SAA.

In addition to our previous letter on even date, we confirm that we act on behalf of Solidarity Trade Union and two of its members, Mr Pierre de Klerk, Mr Armand Moolman and Mr.Jan - Paul Nel respectively.

Our clients' instructions are as follows:

1. Our client's members, all white males, applied for admittance to the SAA Cadet Pilot Development Program by filling out the online application form provided by the SAA.

2. All of our client's members meets the criteria that applicants to the development programme must meet, as stipulated in the online application.

3. Having filled out the first compulsory page of the online application form and having submitted the same, the application of our client's members were rejected as unsuccessful.

4. The reason for their applications being unsuccessful was because of their race and gender, being white and male. The reason for their applications being unsuccessful was confirmed in the media by the SAA's spokesperson Kabelo Ledwaba, reported to have told Beeld that the Cadet Programme was being advertised online as an initiative to bring pilot demographics in line with the country's demographics. Ledwaba was reported to have said that the airline would appoint male, white pilots when there were vacant posts for which applicants of other races could not be found.

5. It is obvious that the applications of our client's members were unsuccessful solely because of their race and gender.

6. According to our instruction our clients demand the following:

6.2 That the deadline for submission of the application form, being 17 August 2012 (today), be postponed to a future date to allow other white males to apply for the program.

6.3 That the online application form be changed to allow white males to apply for the programme.

6.4 That you revert to us before close of business today regarding our client's aforesaid demands.

We place on record that, if you should fail to adhere to us regarding the above demands of our clients, our instructions are to proceed with appropriate legal action.

We await your most urgent reply. 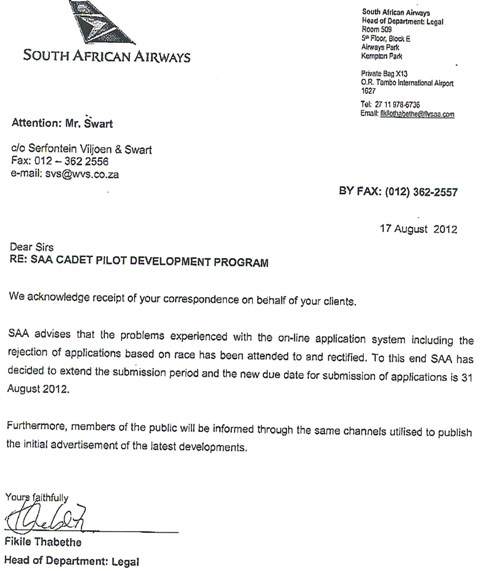