Equal Education media statement: Where is the bailout for learners in the 2019 MTBPS?

Today, Minister Tito Mboweni tabled the 2019 Medium Term Budget Policy Statement (MTBPS). While government has been able to find money to fund bailouts for almost every entity, from South African Airways (SAA) to the South African Broadcasting Corporation (SABC), learners have to contend with reductions in projected spending on education and cuts to infrastructure grants. These bailouts could have been used to cover urgent priorities in our schools:1 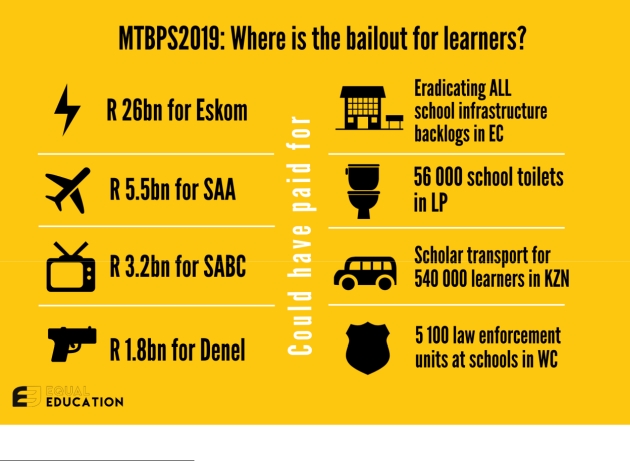 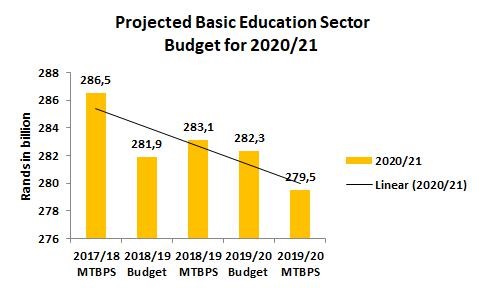 The basic education sector makes up 14.1% of the country’s total budget. It continues to grow, but at an achingly slow pace. When inflation is taken into account, the total basic education budget – that is, provincial and national budgets – is set to grow by a mere 0.8% in 2020/21.

Today’s MTBPS announced cuts to ALL conditional grants, except for the early childhood development grant and the grant for learners with profound intellectual disabilities.2 The budget for the School Infrastructure Backlogs grant (SIBG), which allocates money to the Department of Basic Education (DBE) to build schools, continues to decline in the next financial year, with a projected R350 million real decrease.

The SIBG funds the nationally administered Accelerated Schools Infrastructure Delivery Initiative (ASIDI). Since inception, ASIDI has been allocated a total of R15.5 billion, but spending on this programme has been erratic. This year's budget has been cut by R40 million due to the slow implementation of water & sanitation projects.3

Efficient spending of SIBG funds is another challenge for the DBE. While they have, on average, spent 70% of the budget per year, ASIDI's progress with meeting its targets over the past 8 years, has been worryingly slow. 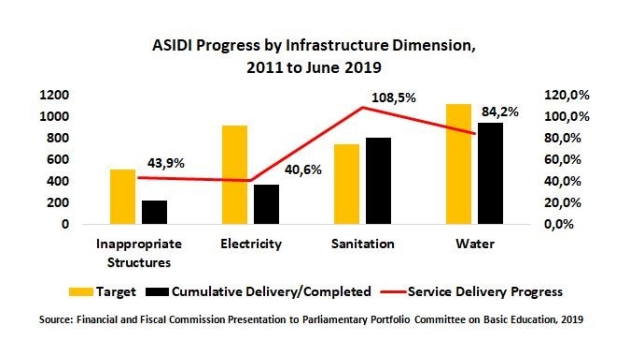 ASIDI continued to perform poorly in the first half of 2019/20, and does not look set to meet its annual targets. Between April and September, only 11 schools were built against a target of 59! 4

South Africa’s public education system is fraught with inequalities that result in disparate schooling experiences for learners ‒ favouring those who can afford to pay and access better resourced schools. The education budget is one of the tools the government can use to address these inequalities and ensure that all learners have an equal opportunity to access quality basic education.

At some point government has to be brave enough to ensure that the difficult trade-offs it has to make, prioritise the well-being and rights of the people and children of this country, instead of tolerating mismanagement, irregular and inefficient spending and the looting of the State’s coffers.

KwaZulu-Natal scholar transport: Court documents submitted by the KZN Department of Education to EE and the Equal Education Law Centre