The DA is in possession of a text message revealing that the Minister of Health, Dr Aaron Motsoaledi, instructed a Deputy Director General (DDG) in his Department to bar the DA from conducting oversight at Forensic Chemistry Laboratories (FCLs). 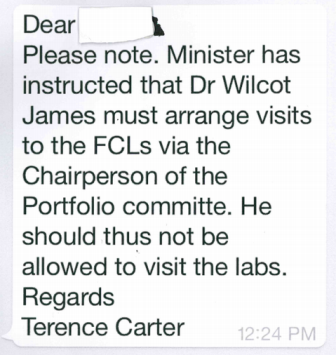 In his text DDG, Terence Carter, writes to an FCL official, informing him that the Minister requested that: "the DA must arrange visits to FCL's via the Chairperson of the Portfolio Committee on Health, and should thus not be able to visits the labs."

I have written  to Minister Motsoaledi to inform him that I shall continue to conduct oversight on health facilities in the country as it is my right as a Member of Parliament to hold the executive accountable as is enshrined in the Constitution.

According to Section 55 (2) of the Constitution: The National Assembly must provide for mechanisms - to ensure that all executive organs of state in the national sphere of government are accountable to it; and to maintain oversight of - the exercise of national executive authority, including the implementation of legislation and any organ of state.

This is what also occurred on a recent scheduled oversight visit to the Durban FCL where I was denied access to oversee the construction of this facility as the deadline for completion of this laboratory has on numerous occasions been pushed back by the Ministry.

It is imperative that FCLs function optimally to produce legally indisputable results. It is simply not acceptable that blood sample testing, a routine and simple procedure, cannot be carried out effectively at our labs.

It is the duty of the Minister as one of the key custodians of our Constitution to ensure that my Constitutional right of access is enabled.

What is Minister Motsoaledi hiding? If he claims his Department is "doing great", why squeeze out the DA from assessing his claim?

Included in my letter to the Minister, I express the regret for his actions as it is an impediment of the Constitutional mandate and includes the obstruction of having members of Parliament oversee the performance of the government. This speaks to a larger debate on holding those in public office accountable.

Therefore, the DA is once again forced to seek legal opinion, in protection of what are clear violations of the Constitution.

ConCourt ruling on 'certificates of needs' a vindication - Wilmot James